Concordia Seminary is a seminary associated with the Lutheran Church and located in Clayton, Missouri. The institution's primary mission is to train pastors, deaconesses, missionaries, chaplains, and church leaders for the Lutheran Church–Missouri Synod (LCMS). The interim president of the seminary is the Rev. Dr. Daniel Preus.[3] The provost and chief academic officer is the Rev. Dr. Douglas L. Rutt.

Concordia Seminary is the second oldest operating Lutheran seminary, after Lutheran Theological Southern Seminary, and is currently the largest Lutheran seminary in the world.[citation needed] Founded in 1839, the seminary initially resided in Perry County, Missouri. In 1849, it was moved to St. Louis, and in 1926, the current campus was built.

The St. Louis institution was at one time considered the "theoretical" (academic) seminary of the LCMS while Concordia Theological Seminary in Fort Wayne was considered the "practical" seminary, although those distinctions are no longer widely recognized. Concordia Seminary currently offers a Master of Divinity degree leading to ordination, as well as Master of Arts, Master of Sacred Theology, Doctor of Ministry, and Doctor of Philosophy degrees. The seminary is considered theologically conservative. It does not train women for ordination as pastors, however it does offer a program by which women may be rostered as deaconesses (a category of "ministers of religion" within the Lutheran Church-Missouri Synod). It promotes historical-grammatical[4] interpretation of the Bible. It is an accredited member of the Association of Theological Schools in the United States and Canada and is accredited by the Higher Learning Commission.

Radio station KFUO-AM had its studios on the seminary campus until they were relocated to the LCMS International Center, although the station continues to use a transmitter tower on the campus. For many years the nationally broadcast Lutheran Hour originated from this LCMS radio station. 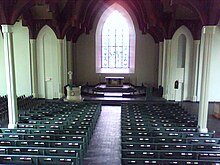 The Chapel of St. Timothy and St. Titus

Dedicated on November 15, 1992, the Chapel of St. Timothy and St. Titus serves as the house of worship for the Concordia Seminary community. Aside from the primary worship space the chapel building also contains a choir practice room, one classroom, the dean of chapel's office, the housefellow's quarters, and a chapel that is used primarily for small worship services and for worship practice.

Concordia Seminary Library has the capacity to house 250,000 volumes and to seat over 300 people, providing study space for divinity students and carrels for graduate students and scholars. The book collection numbers over 245,000 volumes. Included are the personal libraries of many of the founding fathers of the LCMS and its theologians, including C. F. W. Walther. A copy of the 17th-century Calov Bible that was owned by Johann Sebastian Bach is also in the collection.[5]

Located next to Founder's Hall, the Luther Statue was originally dedicated at the former site of Concordia Seminary on Jefferson Avenue in St. Louis in 1903. In 1926, when the present campus was dedicated in Clayton, the statue was relocated to the new campus site. The statue is an exact replica of one that exists in Worms, Germany. The statue in Germany is located where Martin Luther made his famous speech, "Here I Stand", at the Diet of Worms.

Part of the historic campus including Luther Tower

Luther Tower was designed by architect Charles Klauder and was completed in 1966. It stands 156 feet (48 m) tall. At its base is a small chapel, the Chapel of the Holy Apostles. Its crown contains a 49-bell carillon. The bells are dedicated to the memory of all LCMS pastors. The largest bell weighs 2.5 short tons (2,300 kg) and the smallest weighs 17 pounds (7.7 kg).

The Concordia Historical Institute is the Department of Archives and History of the LCMS. The Institute is located at 804 Seminary Place on the Concordia Seminary campus. The building includes a reference room for patrons, a conference room, a museum exhibit space and three stack areas for storage of the collections]. The Institute also maintains two historic sites in Perry County, Missouri, publishes the Concordia Historical Institute Quarterly, and assists districts and congregations of the LCMS to preserve their historical records.[6][7]

Concordia Park is located in the DeMun neighborhood on the grounds of Concordia Seminary. The city of Clayton has leased this passive 1.5-acre (0.607 ha) park from the seminary since 1992.[8] It consists of several hills and trees. Benches and tables are provided for visitors. It was named a Best Picnic Spot by the Riverfront Times in 2008.[9]

Concordia has varsity basketball and tennis teams, but are not affiliated with any league. It also offers club sports including golf and soccer. Known as the Fighting Preachers, the basketball team schedules games with other independents as well as with some NCAA Division III teams. There is a longstanding rivalry with the other LCMS seminary, Concordia Theological Seminary in Fort Wayne, Indiana; Concordia had won every game in that rivalry for 24 years (as of 2008[update]).[10]

The basketball team plays in the Eldon E. Pederson Fieldhouse. The fieldhouse was originally an airplane hangar on an airbase in Kansas. In 1949 the seminary purchased it, disassembled it, and re-erected it on the campus. At one time it served as the practice court of the NBA's St. Louis Hawks and as the home court for the ABA's Spirits of St. Louis.[10]

Concordia Seminary became a focus of national media attention in 1974 when 45 of its 50 faculty members, together with the vast majority of students, walked out of campus to form a rival institution known as Seminex, or Concordia Seminary in Exile.[11] The procession protested the suspension of the seminary's president, John Tietjen, who faced charges from the conservative Synodical president, Jacob Preus, of allowing the teaching of false doctrine.[12] More specifically, the charges alleged that Tietjen had permitted the teaching of historical-critical methods of scriptural interpretation, rather than upon exegetical principles that consider scripture to be the inerrant word of God (see Biblical inerrancy). Seminex struggled due in part to the LCMS preventing it from placing graduates in ministerial positions; it suffered a gradually declining enrollment over the course of the late 1970s, with the last St. Louis commencement being held in May 1983. It continued to exist as an educational institution at the Lutheran School of Theology at Chicago campus through the end of 1987. Seminex contributed to a major schism in the LCMS.