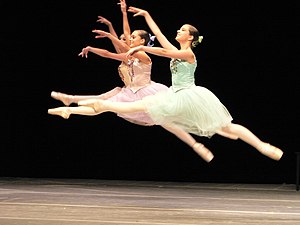 Concert dance (also known as performance dance or theatre dance in the United Kingdom) is dance performed for an audience. It is frequently performed in a theatre setting, though this is not a requirement, and it is usually choreographed and performed to set music.

By contrast, social dance and participation dance may be performed without an audience and, typically, these dance forms are neither choreographed nor danced to set music, though there are exceptions. For example, some ceremonial dances and baroque dances blend concert dance with participation dance by having participants assume the role of performer or audience at different moments.

Many dance styles are principally performed in a concert dance context, including these:

In the United Kingdom, theatre dance is a common term used to indicate a range of performance dance disciplines, and widely used in reference to the teaching of dance. The UK has a number of dance training and examination boards, with the majority[citation needed] having a separate branch dedicated to theatre dance, with codified syllabi in each technique. Many dance teachers and schools worldwide, prepare their pupils for dance examinations and qualifications with a UK-based organisation, with notable examples including the Royal Academy of Dance, the Imperial Society of Teachers of Dancing and the International Dance Teachers Association. All UK theatre dance organisations are consistent in offering classical ballet, tap and modern or jazz as their core theatre branch subjects[citation needed]. Many also offer 'theatre craft' or 'stage dance', which is devised to reflect the choreography seen in musical theatre.