Concepción de Ataco is a municipality and city within the Ahuachapán Department, El Salvador. It has an area of 61.03 km ² and a population of 18,101 inhabitants (est. 2006). 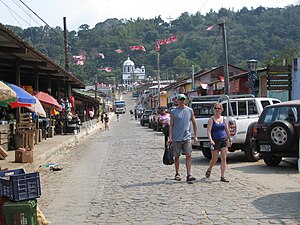 Archbishop Pedro Cortes y Larraz, Ataco in 1770 belonged to the parish and its people Ahuachapán was represented by 303 families with 784 indigenous people who spoke the Nahuatl of the Pipil turn these people spoke and understood also Castilian .

In the colonial period Ataco belonged to the administration of the province or municipality over Izalco Sonsonate. As of June 12, 1824 belonged to the municipality of primitive and great department of Sonsonate. Because the law of July 4, 1832 this population was made part of the jurisdiction of the judicial district of Ahuachapán. By legislative decree of February 8, 1855 the town was incorporated in the department of Santa Ana. According to a municipal report dated 20 April 1858, Ataco had a population of 972 inhabitants.

During the year 1866 the municipalities of Ataco asked the authorities, that this population be divided and separated from the department of Santa Ana and Sonsonate department add for convenience of local interests. This application did not succeed.

By Legislative Decree dated 26 February 1869 Ataco joined the district and department of Ahuachapán.

In Concepcion de Ataco you can find stores that sell a wide variety of crafts including sculptures, ornaments, weavings, embroidery, candles, key chains and coffee. Ataco's native population still retains many of the customs and traditions of their grandparents—these go from generation to generation through oral tradition, preserving, so far, a bit of our culture and language (Nahuat).[2]

The small town, has the basic services (water, electricity, sewage, train toilet, telephone, Internet, post office, police and magistrates' court). The town has 4 branches of the agricultural sector, all benefits of coffee, so it follows that the municipality is mainly agricultural. There are 4 foundations or organizations concerned with agriculture and community development: FUNDATACO Foundation (ATAC), ADECOA (Association for Community Development Ataco) FUNADIC (Ataqueña Foundation for the Integral Development Community) and Romero Association. The city’s economy has also been influenced by tourism starting in 2004 and that is the reason why the city has grown prosperous. Many investors—both local and international—are opening businesses like hotels, restaurants, bars, etc. 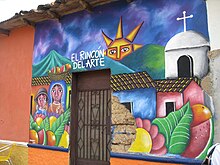 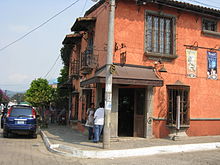 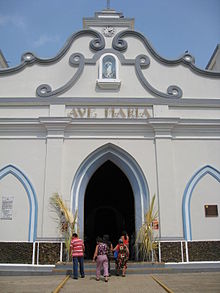 Ataco has started its tourism business in the late 2004. Prior to that the most visited colonial village was Apaneca, a village 20 minutes away from Ataco. After people realized Ataco has more opportunities and that it's a very cheerful village, people starting investing in Ataco. Even though Ataco did not win first place in the Pueblos Vivos contest it is still preferred by many local and international tourists.

Leaver looms were reintroduced to the area and can see and appreciate the art of fabric[3] making in some local craft shops.

You can visit the cafes to enjoy the excellent coffees from this area and visit the restaurants where you can enjoy typical Salvadoran food and gourmet food. Ataco has many restaurants that are national and international and they serve a variety of foods: Chilean, French, Italian, American, Mexican, Japanese, Spanish, Central American, and Salvadoran (including pupusas, and many other traditional dishes).[4] One can enjoy the gastronomic festival in the central plaza. Among the main restaurants in Ataco are:[5]

One of the most famous handicraft shops that has treadle looms is Diconte & Axul. This is a very colorful and striking corner which gives life to the people of Ataco, for it is out of the ordinary and traditional. Its facade shows the lines, colors and figures of the handcrafts that are inside. The shop's charismatic owners, Alvaro Orellana and Cristina Pineda Fagioli, paint each piece and, as such, they should be considered unique, a characteristics which gives them higher value.

One of the first businesses to gain recognition in the Route of the Flowers was Diconte & Axul, a variety store crafts, textile art and has become the reference of the people to attack from more than 7 years. Established in an old house, dating from 1910, near the center of town, Diconte & Axul offers tourists the best opportunity to buy crafts from all over El Salvador, and Guatemala and other countries. Here you may see the famous "Cats" and other crafts, painted with the colorful style introduced by the artists, Cristina Pineda Fagioli, and Alvaro Orellana, who also attend the place. You can also see how local artisans make colorful fabrics using treadle looms, a tradition that is disappearing throughout Latin America. In Diconte & Axul you can purchase these unique fabrics from $6 to $8 a yard. 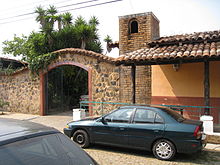 Ataco has many hostels and hotels with a cozy arrangements, large rooms with great spaces and very low prices. Some hotels and hostels in the area:[9] 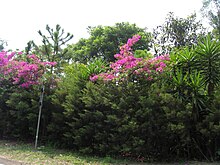 The Cool Climate allows many plants to develop and reproduce fast

Ataco experiences a subtropical highland climate. Ataco's high elevation gives the area one of the nicest climate ranges in El Salvador. Temperatures never go above 23 °C (73 °F) and always stay cool during the night. Sometimes it can be very chilly. The lowest temperature recorded was 4 °C (40 °F) which occurred during a cold front in November 2010. The fact that the city receives a lot of precipitation, and that the temperature is relatively cool but not cold, makes the place ideal for plants of many types to grow; it is usual to see a low of flowers, pine trees, and "veraneras" in Concepcion de Ataco and in the surrounding areas. Because the town is located on a mountain the sidewalks are designed to be really high from the street, because when there is heavy rain all the runoff from the mountain could flood the road with a couple of inches. The month with the highest rainfall is July with 316 millimeters of rain (13 inches). The average coolest months of the year are October and November with temperatures as low as 10 °C (50 °F) (due to a high presence of wind during this period of year). 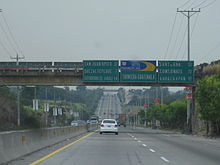 Access by paved road that connects with Ahuachapán and Sonsonate (CA-8). There are regular buses that arrive at the entrance of the village, from Sonsonate and Ahuachapán. The (CA-8) is a small rural highway with two lanes, the road connects Ataco with Apaneca too and San Salvador. In order to take the CA-8 there are different highways depending on what part of the country you can take the RN-13 if you are coming from Santa Ana or Chalchuapa (if you are coming form the eastern part of Santa Ana the nearest highways is the RN-12), from Acajutla one can take the CA-2 and then the RN-15 and connect to the CA-8 near Apaneca a few kilometers away from Ataco. If coming from San Salvador or anywhere else in the country the highway that connects to the area is the CA-1 (Pan-American Highway)

Most roads are asphalt but many main parts with traffics are built out of concrete. Many roads are just 2 lanes because they need to go in high mountain places, but as soon as you go down the highway system is most of the time 4 lanes going all directions in the country.

Ataco and its surroundings are known for their high safety levels. Even though there is no danger at all nor the presence of any type of violence, Politur (Tourism Police) is present in the area to not only maximize the safety levels, but to orient those who are lost, and to help out with any trouble one has.