Infinite Construction - STEAM
"Universal education" redirects here. It is not to be confused with Universal access to education. 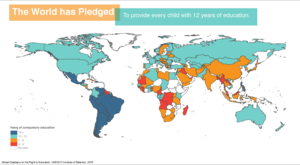 International Covenant on Economic, Social and Cultural Rights requires, within a reasonable number of years, the principle of compulsory education free of charge for all.[2]

At the start of the last century, compulsory education was to master physical skills which are necessary and can be contributed to the nation. It also instilled values of ethics and social communications abilities in teenagers. Plus, it would allow immigrants to fit in the unacquainted society of a new country.[3] Nowadays, compulsory education has been considered as a right of every citizen in many countries.

It is mostly used to advance the education of all citizens, minimize the number of students who stop going to school because of family economic reasons, and balance the education differences between rural and urban areas.

The quality of compulsory education in each country depends on what political system the country has and how well developed the education system is in the country. On the other hand, in countries with a republican system of government, being educated is necessary and important for every citizen, and there are strict laws about compulsory education.[4]

Plato's The Republic (c. 424–c. 348 BCE) is credited with having popularized the concept of compulsory education in Western intellectual thought. Plato's rationale was straightforward. The ideal city would require ideal individuals, and ideal individuals would require an ideal education. The popularization of Plato's ideas began with the wider Renaissance and the translation of Plato's works by Marsilio Ficino (1434–1499), culminating in the Enlightenment. The Enlightenment philosopher Jean-Jacques Rousseau, known for his own work on education (including Emile, or On Education), said, 'To get a good idea of public education, read Plato's Republic. It is not a political treatise, as those who merely judge books by their title think, but it is the finest, most beautiful work on education ever written.'[5]

In Sparta boys between the age 6 and 7 left their homes and were sent to military school. School courses were harsh and have been described as a "brutal training period". Between the age of 18 and 20, Spartan males had to pass a test that consisted of fitness, military ability, and leadership skills. A student's failure meant a forfeiture of citizenship (perioidos) and political rights. Passing was a rite of passage to manhood and citizenry, in which he would continue to serve in the military and train as a soldier until the age of 60 when the soldier could retire to live with his family.[6]

Every parent in Judea since ancient times was required to teach their children at least informally. Over the centuries, as cities, towns and villages developed, a class of teachers called Rabbis evolved. According to the Talmud (tractate Bava Bathra 21a), which praises the sage Joshua ben Gamla with the institution of formal Jewish education in the 1st century AD, Ben Gamla instituted schools in every town and made formal education compulsory from age 6-8.[7]

The Aztec Triple Alliance, which ruled from 1428 to 1521 in what is now central Mexico, is considered to be the first state to implement a system of universal compulsory education.[8][9]

The Protestant Reformation prompted the establishment of compulsory education for boys and girls, first in regions that are now part of Germany, and later in Europe and in the United States.

Martin Luther's seminal text An die Ratsherren aller Städte deutschen Landes (To the Councillors of all Towns in German Countries, 1524) called for establishing compulsory schooling so that all parishioners would be able to read the Bible by themselves.[10] The Protestant South-West of the Holy Roman Empire soon followed suit. In 1559, the German Duchy Württemberg established a compulsory education system for boys.[11] In 1592, the German Duchy Palatinate-Zweibrücken became the first territory in the world with compulsory education for girls and boys,[12] followed in 1598 by Strasbourg, then a free city of the Holy Roman Empire and now part of France.

In Scotland, the School Establishment Act of 1616 commanded every parish to establish a school for everyone paid for by parishioners. The Parliament of Scotland confirmed this with the Education Act of 1633 and created a local land-based tax to provide the required funding. The required majority support of parishioners, however, provided a tax evasion loophole which heralded the Education Act of 1646. The turmoil of the age meant that in 1661 there was a temporary reversion to the less compulsory 1633 position. However, in 1696 a new Act re-established the compulsory provision of a school in every parish with a system of fines, sequestration, and direct government implementation as a means of enforcement where required.

In the United States, following Luther and other Reformers, the Separatist Congregationalists who founded Plymouth Colony in 1620, obliged parents to teach their children how to read and write.[13] The Massachusetts School Laws, three legislative acts enacted in the Massachusetts Bay Colony in 1642, 1647, and 1648, are commonly regarded as the first steps toward compulsory education in the United States. The 1647 law, in particular, required every town having more than 50 families to hire a teacher, and every town of more than 100 families to establish a school.[14] The Puritan zeal for learning was reflected in the early and rapid rise of educational institutions; e.g., Harvard College was founded as early as 1636.[15]

Prussia implemented a modern compulsory education system in 1763. It was introduced by the Generallandschulreglement (General School Regulation), a decree of Frederick the Great in 1763-5.[16] The Generallandschulreglement, authored by Johann Julius Hecker, asked for all young citizens, girls and boys, to be educated from age 5 to age 13-14 and to be provided with a basic outlook on (Christian) religion, singing, reading and writing based on a regulated, state-provided curriculum of text books. The teachers, often former soldiers, were asked to cultivate silk worms to make a living besides contributions from the local citizens and municipalities.[17][18]

In Austria, Hungary and the Lands of the Bohemian Crown (Czech lands), mandatory primary education was introduced by Empress Maria Theresa in 1774.[16]

Compulsory school attendance based on the Prussian model gradually spread to other countries. It was quickly adopted by the governments in Denmark-Norway and Sweden, and also in Finland, Estonia and Latvia within the Russian Empire, but it was rejected in Russia itself.[19][20]

Education was made compulsory in the Ottoman Empire in 1824 with "Ferman About Tâlim-i Sibyan" by Sultan II. Mahmud. According to this imperial order, the parents had to send their children to school. II. Mahmud also forbade child labour with this regulation.

England and Wales were slow to introduce compulsory education due to the upper class defending its educational privileges.[20] In England and Wales, the Elementary Education Act 1870 paved the way for compulsory education by establishing school boards to set up schools in any places that did not have adequate provision. Attendance was made compulsory until age 10 in 1880. The Education Act of 1996 made it an obligation on parents to require children to have a full-time education from age 5 to 16. However, attendance at school itself is not compulsory: Section 7 of the Act allows for home education.

France was equally slow to introduce compulsory education, this time due to conflicts between the secular state and the Catholic Church,[20] and as a result between anti-clerical and Catholic political parties. The first set of Jules Ferry Laws, passed in 1881, made primary education free for girls and boys; communes and departments had the shared responsibility to fund it. In 1882, the second set of Jules Ferry Laws made education compulsory for girls and boys until the age of 13. In 1936, the upper age limit was raised to 14.[21] In 1959, it was further extended to 16.[22]

Germany's compulsory education is supported by the states of Germany. It started in 1619 and improved in the 17th century. It had a huge effect in the country and among a larger number of people than in the United States.[23]

The Education (Scotland) Act 1872 made elementary education compulsory for the first time for all children aged between 5 and 13. The existing parish and burgh schools were taken over by the state and managed by locally elected School Boards.

In 1852, Massachusetts was the first U.S. state to pass a contemporary universal public education law. In particular, the Massachusetts General Court required every town to create and operate a grammar school. Fines were imposed on parents who did not send their children to school, and the government took the power to take children away from their parents and apprentice them to others if government officials decided that the parents were "unfit to have the children educated properly".[24]

In 1918, Mississippi became the last state to enact a compulsory attendance law.[25]

In 1922 an attempt was made by the voters of Oregon to enact the Oregon Compulsory Education Act, which would require all children between the ages of 8 and 16 to attend public schools, only leaving exceptions for mentally or physically unfit children, exceeding a certain living distance from a state school, or having written consent from a county superintendent to receive private instruction.[26] The law was passed by popular vote but was later ruled unconstitutional by the United States Supreme Court in Pierce v. Society of Sisters, determining that "a child is not a mere creature of the state". This case settled the dispute about whether or not private schools had the right to do business and educate within the United States.

In the Indian kingdom of Travancore, Queen Gowri Parvati Bayi issued a royal rescript declaring universal education and formally recognized the role of State ensure the right of education from public revenue in 1817.

China's nine-year compulsory education was established and considered successful. The compulsory education brings huge effects of different aspects of people's lives. The number of students became larger and the drop-out rates of students decreased in huge percent, even in the rural area. The purpose of the establishment of compulsory education in China is about “universalization”, which balances the educated differences between the towns and villages (Ding 13). On the other hand, it efficiently improves the quality of the facilities in schools because of the safety guarantee. However, nine-year compulsory education still has problems and needs to be improved. Most of the drop-out students quit schools because of the unwillingness of studies and the will which parents do not want their child to go to school which will happen only in extreme rare situation, instead of not being able to afford the tuition. Therefore, the improvements of Chinese compulsory education are still necessary in the modern society.[28]

Timeline of introduction of compulsory education

Per-country variations in the age range of compulsory education

Number of pupils and students enrolled in compulsory education

Due to population growth and the proliferation of compulsory education, UNESCO calculated in 2006 that over the subsequent 30 years, more people would receive formal education than in all prior human history.[131]

Critics of compulsory education argue that such education violates the freedom of children, is a method of political control, is ineffective at teaching children how to deal with the real world, and has negative effects on children leading to higher rates of apathy, bullying, stress, and depression.[citation needed]