Enlarge Mohéli Union of the Comoros
This article is about the archipelago. For the country, see Comoros.

The Comoro Islands or Comoros (Shikomori Komori; Arabic: جزر القمر‎, Juzur al-Qomor; French: Les Comores) form an archipelago of volcanic islands situated off the southeastern coast of Africa, to the east of Mozambique and northwest of Madagascar. The islands are politically divided between the Union of the Comoros (pop. 850,688) and two territories of France: the department of Mayotte (pop. 270,372) and the uninhabited Glorioso Islands, a part of the Scattered Islands in the Indian Ocean, the 5th district of the French Southern and Antarctic Lands.

The Comoro Islands are located in the Mozambique Channel to the north-west of Madagascar and facing Mozambique. These volcanic islands, covering a total area of 2034 km2, are as follows:

The Glorioso Islands, comprising Grande Glorieuse, Île du Lys and eight little rock islets, were administratively attached to the archipelago before 1975, and, geologically speaking, form a part of the archipelago.

Notable reefs that are part of the archipelago are as follows: 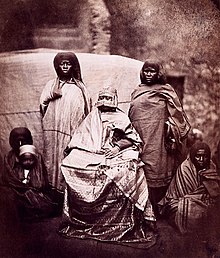 Jumbe-Soudi, queen of the Comorian island of Mohéli, receiving a French delegation, 1863.

The Comoros may have been settled as early as the 6th century; among the peoples who crossed the sea to populate the islands are Bantu-speaking peoples, Austronesian (including Malagasy), Arabs, Somalis, Portuguese, French, and Indians. Islam probably arrived during the 10th century. The Comoros islands formed, with Zanzibar, Pemba, Lamu, and the coastal towns of Kenya and Tanzania, a united and prosperous region of Swahili culture, trading in local goods which were exported to the African coast, Madagascar, the Middle East and India. In that period, political power was in the hands of local rulers. During their explorations of the Comoros region, the Portuguese made landfall on the Islands of the Moon, in 1505; kamar is Arabic for moon.

During the colonial period, French settlers established plantations, initially producing sugar, then, in the twentieth century, perfume plants and spices such as ylang ylang, vanilla and cloves as well as copra. In 1946, the Comoros became a French overseas territory.

In 1974, France organized a referendum for self-determination in the archipelago in which the population except in Mayotte voted overwhelmingly in favour of independence. Following the unilateral declaration of independence in 1975, France maintained sovereignty over Mayotte. The three remaining islands formed the Etat Comorian, which later became the Federal Islamic Republic of the Comoro Islands and is today the Union of the Comoros.

In 1997, demands for increased autonomy on the islands of Ndzuani (Anjouan) and Mwali (Moheli) led to the breakup of the Federal Islamic Republic. In 2001, the government reformed as the Union of the Comoros under a new constitution which gave each of the three islands more autonomy than had been enjoyed previously. In 2008, President of Anjouan refused to hold free elections. He was forced to flee following military intervention by troops of the Comorian Union and the African Union. The island country continues its present form of confederal government albeit with minor changes approved in referendums in 2009 and 2018.[1]

Mayotte, which had voted to retain French suzerainty in the 1975 referendum, expressed a wish to accede to the status of a département d'outre-mer (DOM) (Overseas Department) following another referendum held on the island on the 29 March 2009.[1] Mayotte officially became France's 101st department on 31 March 2011.

The Comoro Archipelago consists of volcanic islands. These volcanic islands, together with the high mountains in the north of Madagascar, were formed in the Tertiary and Quaternary periods. The island of Mayotte is the oldest one still above sea level and underwent three volcanic phases between 15 million and 500,000 years ago. The ages progressively decrease from east to west. Grande Comore is the youngest island and is still volcanically active. Karthala, a shield volcano occupying some two thirds of the island, rises to 2361 meters. The summit caldera is quite large, being approximately 3 x 4 km (1.9 x 2.5 miles) in size at the rim (2007).[2] [3]

The Comoro Archipelago enjoys a tropical maritime climate, characterized by slight daytime temperature variations throughout the year of around 26 °C (78.8 °F) at sea level and by abundant precipitation: 2,679 mm (105.5 in) a year. The average temperature of the sea water is 25 °C (77 °F). There are two seasons in the Comoros: the hot and humid season flowing in from the north-west from November to April and the dry season from May to October. The climate on Mayotte is, nevertheless, noticeably warmer and drier. The climate is also characterized by important local variations in temperature and precipitation according to altitude, relief and the degree of exposure to the elements. Annual precipitation therefore varies in the region of 1,000 to 6,000 mm (39.4 to 236.2 in) and the absolute minimum of 0 °C (32 °F) is reached on the summit of Karthala.

The hot, dry season is caused by a vast low pressure area which extends over a large part of the Indian Ocean and Central Africa. This low pressure favours gusty winds and cyclones. The last cyclone was "Gafilo" which passed close to the Comoros on 5 March 2004 causing great material damage. During the hot and humid season it can rain as much as 200 mm (7.9 in) in twenty-four hours. The dry season is calmer. The low pressure moves towards the continent of Asia (this is the monsoon, the wind blowing from the south-east) and an anticyclone forms below the Comoros. This still does not prevent the islands from having a few gusts of wind, but their intensity is a lot less than during the hot season.

The two winds that bring the two different seasons are called the Kashkasi (in November) and the Kusi.

The maki of Mayotte, a type of lemur found on this island, is protected by French law, and by local tradition; it is believed to have been introduced from Madagascar.[4] Several mammals are endemic to the islands. A species of bat discovered by David Livingstone in 1863, previously abundant, has now been reduced to a population of about 1200 specimens, restricted to Anjouan and Moheli. A British preservation group sent an expedition to the Comoros in 1992, with the object of transporting some specimens to Great Britain, in order to form a reproducing colony.

Twenty-two species of birds are endemic to the archipelago, and seventeen of them only live on territories controlled by the Union; especially notable examples of these are the Karthala scops-owl, the Anjouan scops-owl and Humblot's flycatcher.

Partly as a result of international pressure during the 1990s, the government of the Union has begun to take greater care of the environment. Measures have been taken not only to preserve the rare fauna, but also to check the destruction of the environment, especially on Anjouan, which is densely populated. More precisely, in order to minimize the felling of trees for fuel, kerosene has been subsidized, and efforts are underway to replace the lost forest cover caused by the distillation of Ylang-ylang for perfume. The Fund for the Support of Community Development, sponsored by the International Development Association (IDA, a subsidiary of the World Bank) and the Comorian government, is applying itself to improving the water supply on the islands.

Like other islands in the region, these islands possess numerous endemic species; here are some of the most notable species:

No large African animals (elephants, giraffes, lions, crocodiles, zebras or antelopes) are found on the Comoros, despite the islands being relatively close to the mainland.

On the Comoros there are numerous tropical ecosystems that are primarily dependent on the altitude. There you can find many kinds of tropical plants, large numbers of which are endemic. Like most islands, the diversity of the local flora suffers from two pressures, on the one hand the reduction of available space caused by the reduction of biotopes due to the invasion of humans in what used to be the wildest areas and on the other hand the invasion of exotic plant species such as guava trees. The flora has only been poorly studied, France has however been made attempts on Mayotte to fill in the gaps. Efforts to preserve species are still not enough to save the richest zones, and disturbances of biotopes are expected to take place for many years to come.

The Comoro Archipelago is divided between:

The United Nations General Assembly continued to condemn the French presence in Mayotte until 1994. France, however, used its power of veto in the UN to prevent the Security Council from passing a resolution condemning France.

The African Union judged the French presence on Mayotte to be illegal.[5]

The Comoros underwent a political crisis that started off in 1997 with the separatism on Anjouan. The political authorities on the island had turned the population of the island against the central government, advocating at first reunification with France, and later a greater autonomy bordering on independence.