Comodoro Rivadavia (Spanish pronunciation: [komoˈðoɾo riβaˈðaβja]) is a city in the Patagonian province of Chubut in southern Argentina, located on the San Jorge Gulf, an inlet of the Atlantic Ocean, at the foot of the Chenque Hill. Comodoro Rivadavia is the most important city of the San Jorge Basin[citation needed], and the largest city south of the southern 45th parallel.

The city is often referred to simply as Comodoro. It was at one time the capital of the Comodoro Rivadavia Territory, which existed from 1943 to 1955. The territory was a part of Chubut before and after its creation, and the city became the capital of the Escalante Department. It had a population of 137,061 at the 2001 census [INDEC], and grew to 182,631 by the 2010 census.[1]

Comodoro Rivadavia is a commercial and transportation center for the surrounding region, the largest city of Chubut, and an important export point for a leading Argentine petroleum district. A 1,770 km pipeline conveys natural gas from Comodoro Rivadavia to Buenos Aires.

Founded by decree on February 23, 1901, as a port for the inland settlement of Sarmiento, the first settler was Francisco Pietrobelli. Early settlers included Boers escaping British rule in South Africa, as well as Welsh settlers.

The town was named in honour of shipping minister Martín Rivadavia, a proponent of the development of Southern Argentina. It has been prosperous since 1907, when a drilling crew searching for water struck oil at a depth of 539 m.

Rada Tilly is a beach resort and now suburb 12 km south of Comodoro. The National Museum of Petroleum is located in the General Mosconi neighbourhood 3 km north of central Comodoro Rivadavia. It was opened in 1987 by the state-owned oil company YPF.

Comodoro Rivadavia is served by General Enrique Mosconi International Airport (Airport Code CRD/SAVC) with daily flights to Buenos Aires and many other Patagonian cities, as it is the main hub of LADE.

The urgency to define short routes to transport products from Colonia Sarmiento and bring them to that village created the necessity of a port in the area of San Jorge Gulf. This necessity made possible the foundation of Comodoro Rivadavia, today capital of petroleum in Argentina. The first governor of Gobernación Nacional del Chubut was Colonel Luis Jorge Fontana, who traveled around the whole extension attributed to Chubut commanding a numerous group of Welsh immigrants in 1885. American researcher Junius Bird and Finnish geographer Väinö Auer confirmed the existence of the Tehuelche people, who lived in the area of Rada Tilly some 9000 years ago. This information was confirmed by Father Brea, who some years ago contributed to this theory with the discovery of utensils and human remains near Rada Tilly.[citation needed]

It is widely known that the Tehuelche, who came from the north of Patagonia during the warm summer, used to make camp where Rada Tilly is today. The English navigator [Robert FitzRoy]] was the first to mention its existence in a navigation chart. 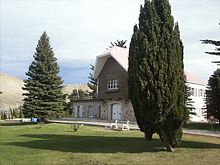 On March 10, 1889, Francisco Pietrobelli, accompanied by the Tehuelche man Sainajo and Marcelo Pereira, came to Rada Tilly following FitzRoy's navigation charts in search of an anchoring place to set up a deep-water port where deep-draft ships could stop to supply the flourishing Colonia Sarmiento.

The corvette La Argentina, commanded by Commodore Martín Rivadavia, arrived near Mount Chenque in an exploratory mission and settled an anchorage place now called Kilometro 5, Caleta Córdova or Punta Borjas. Pietrobelli completed the construction of the first storage shed on June 26 in the place indicated years before by a Schinus molle trunk. Commodore Rivadavia became the first Argentine marine to anchor his corvette in Rada Tilly in March 1891, while he was reconnoitering the area to control the displacement of the Chilean Army in the Argentine south. The village was named after the Spanish marine Francisco Everardo Tilly y Paredes, who during 1794 and 1795 gave combat and defeated the Portuguese army at the Rio Plata.

The settlement was renamed Comodoro Rivadavia on February 23, 1901 by decree of the national government, in homage to the illustrious marine, grandson of the great statesman and first Argentine president, Bernardino Rivadavia.

In 1903 six hundred Afrikaner families arrived in Argentina following the loss of the Second Boer War. They were given farming land in the lands around Comodoro Rivadavia but due to a shortage of water had to bring water in by ox wagon. The lack of water was a big impediment to the development of the settlement. At the Afrikaners' insistence drilling began in 1907 in an effort to look for water but instead they struck oil. Although much of the oil was discovered on land given to Afrikaans settlers, they could not benefit directly from the discovery due to Argentinian law which decrees that all mineral deposits belong to the state. Therefore, most of the town's Afrikaans settlers moved on to Sarmiento and surrounding regions to set up farms there.[2]

The discovery of oil in 1907 boosted economic growth in Comodoro Rivadavia. By the end of 1919, most of the 1719 workers were given accommodation in small metal sheet houses without any heating or electric light with temperatures below zero and winds near 100 km/h. The establishment of Yacimientos Petrolíferos Fiscales (YPF) in 1922 led to the development of the town, further accelerated afterand the end of the 1950s by President Arturo Frondizi's oil campaign to foster the installation of numerous foreign companies. The city evolved around this industry, and even today when this panorama has changed substantially, it is still called the "National Oil Capital."

The beach village Rada Tilly was founded on July 24, 1948, and today is an important hub for tourism in Argentina. Oil production has begun to decline in quantity but the area has been turning its attention to wind power. Windmills on Cerro Chenque and surrounding hills comprise South America's largest wind farm and provide 20% of Comodoro's energy needs.

Comodoro Rivadavia features a cold semi-arid climate (Köppen BSk). According to the Trewartha climate classification, it has a subtropical climate and is one of the southernmost locations in the world to have one. While the city receives less than 250 mm of rain annually, its relatively low evapotranspiration rate causes it to fall under this climate category. Summer is relatively hot and dry with an average temperature of 19.9 °C (67.8 °F) in January.[3] Winter is mild with an average temperature of 6.8 °C (44.2 °F) in July.[3] Precipitation is low, though the winter months receive more precipitation than in summer.

Comodoro Rivadavia had a population of 182,631 inhabitants in 2010, compared to 135,632 in 2001 and 124,104 in 1991. The city grew by about a third between 2001 and 2010, compared to an increase of 9.2% between 1991 and 2001; the national average was of around 11% in both periods, representing a notable acceleration in population growth for the city in comparison to Argentina.[1] The city size places Comodoro Rivadavia as the 20th largest city of the country and the largest in South Patagonia, which goes from Chubut to Tierra del Fuego.

Comodoro Rivadavia is the biggest city to the south of the Colorado River. The city developed from the oil camps which evolved into neighbourhoods.

The Downtown area is divided into: Centro, Loma and Civico neighbourhood. 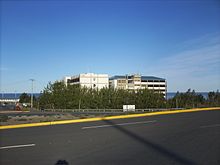 Campus of the National University of Patagonia San Juan Bosco

The Northern Area is divided into:

Panoramic view of the city.

The Casino Club Comodoro, part of a growing tourism sector

The oil production started in Chubut in 1907, when a drilling rig which was looking for water discovered oil instead. The Argentine oil industry started in Comodoro Rivadavia, and was facilitated by the 1886 National Mining Code (Codigo de Mineria de la Nación). This code established that the oil fields belonged to the State, and that they could also be exploited by the private sector by concession.

In 1922 YPF (Yacimientos Petrolíferos Fiscales), the first state-owned oil company in the world, was created by President Hipólito Yrigoyen's government. This company helped the society by improving the construction of houses, providing new jobs and health care. Engineer Enrique Mosconi was in charge of running the company. By 1933, 1,648 wells had been drilled in Comodoro Rivadavia; 88.9% of them were economically productive.

In 1935 the First Oil Law was passed. It established that the National and provincial States would receive as contribution the 12% of the Gross Product from all oil drilling, which is still in effect.

In 1958, Law Number 14,773 was signed by President Arturo Frondizi, establishing that the Government had exclusive ownership over all oil fields.

The most important oil fields discovered during the 60's were El Huemul and Piedra Clavada. At the beginning of the same decade twenty wells were drilled.

Until 2001, 5,300 wells were drilled, of which 3,000 were economically productive. As a result of the exploratory activities developed during the century, the remaining reserves reach 182.017 million m³ of oil. San Jorge gulf is the leader in oil extraction. 46,000 m³ per day are extracted in the zone, representing 46% of total crude oil production in the nation.

Viteaux and Chenque Hills, the city's most distinctive geographic features

Comodoro Rivadavia is situated in the south of Argentina in the province of Chubut, on the coast of San Jorge Gulf.

It was necessary to create a port in the area of San Jorge Gulf in order to have shorter routes for transporting products from and to the town of Sarmiento, situated 180 km away from the city of Comodoro Rivadavia. 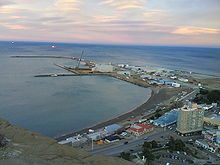 The Port Zone from Chenque Hill

Since 1908, the small and weak port Maciel received passengers and shipments that arrived at the city of Comodoro Rivadavia. It was built of wood and only could support small ships. In 1923, the construction of the port started. In 1926 the construction was stopped, but in 1928 it was resumed.

The shipyard has two parallel industrial facilities of 70 meters long and 4 meters wide. This allows the repair and building of ships in a roofed space without the weather affecting the activity. The shipyard has three travelling cranes of 8 tons each. Works made in the shipyard include the building of eolic mill towers and oil buoys.

The port facilities include:

The city also is home to a factory that produces concrete, property of Petroquimica Comodoro Rivadavia S.A. It produces different types of concrete: Standard Portland, Puzolanic, BCA, ARI, bricklaying concrete Caltex, concrete for oil industry. The total production of concrete for the year 2002 was 228,000 tons.

The wind farm of Comodoro Rivadavia has a capacity of 18,820 kW with 26 generators, and is the most important in Latin America. Plans exist to connection it the national energy, which could allow the sale of energy to other regions.

The most important sports in the city of Comodoro Rivadavia are basketball, football and car racing, among others such as land yachting, judo, rugby and athletics.

Map of a nearby track, Autódromo General San Martín

The most popular football clubs are CAI (Comisión de Actividades Infantiles), Huracán, which plays in the Argentine Tournament "B" and Club Atlético Jorge Newbery.

Comodoro Rivadavia also has a football league in which many teams participate; the principal teams are Jorge Newbery, Huracán and Petroquímica. There are other clubs such as Tiro Federal, Universitario, Ferroviario, Usma, Tiro Federal and Portugues, which are located in the First A League of Comodoro Rivadavia.

Land yachting has become very popular in the city and the beaches of Rada Tilly, together with the windy climate, are ideal to practise the sport.

The World Championship of Landyachting was held in 2008 in Rada Tilly.