The Community of Portuguese Language Countries (Portuguese: Comunidade dos Países de Língua Portuguesa; abbreviated as the CPLP), also known as the Lusophone Commonwealth (Comunidade Lusófona),[1][2] is an international organization and political association of Lusophone nations across four continents, where Portuguese is an official language. The CPLP operates as a privileged, multilateral forum for the mutual cooperation of the governments, economies, non-governmental organizations, and peoples of the Lusofonia.[3] The CPLP consists of 9 member states and 19 associate observers, located in Europe, the Americas, Asia, and Africa.

The history of the CPLP began when it was founded in 1996, in Lisbon, by Angola, Brazil, Cabo Verde, Guinea Bissau, Mozambique, Portugal, and São Tomé and Príncipe, nearly two decades after the beginning of the decolonization of the Portuguese Empire. Following the independence of Timor-Leste in 2002 and the application by Equatorial Guinea in 2014, both of those countries became members of the CPLP. Macau (a Special Administrative Region of China), Galicia (an Autonomous Community of Spain), and Uruguay are formally interested in full membership and another 17 countries across the world are formally interested in associate observer status. 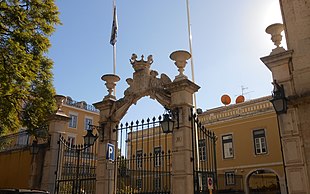 The seat of the Executive Secretariat of the CPLP is at Penafiel Palace, in Lisbon, the capital of Portugal.

The idea of a type of international community or political union of Portuguese language countries had been proposed and studies numerous times in history. However, the idea for what would become the CPLP came about in 1983, during a state visit to Cabo Verde by Jaime Gama, Foreign Minister of Portugal, when he first proposed a biennial summit of heads of state and government of Lusophone countries of the world and the idea of regular meetings between ministerial counterparts of the member states.[4]

The Community of Portuguese Language Countries was officially founded on 17 July 1996 at the 1st CPLP Heads of State & Government Summit, in Lisbon, Portugal.

In 2005, during a meeting in Luanda, the ministers of culture of the member states declared the 5 May as the Lusophone Culture Day (Dia da Cultura Lusófona in Portuguese).[5]

Through successive enlargements, the Union has grown from the seven founding states—Angola, Brazil, Cape Verde, Guinea-Bissau, Mozambique, Portugal, and São Tomé and Príncipe—to the current nine, with the self-determination of Timor-Leste in 2002[6] and the accession of Equatorial Guinea in 2014[7] at the 10th CPLP Summit in Dili, Timor-Leste with the issuance of the Dili Declaration.[8]

The community has grown beyond its mission in fostering cultural ties between the Portuguese language countries into facilitating trade and political cooperation between the Lusophone countries of the world, with the CPLP is the fourth largest producer of oil in the world and its citizens totalling more than 270 million people.[9][10]

In 2017, in Brasilia, the nine member states agreed to enlarge cooperation in matters of the seas, tourism, economy and a more ambitious defense and cooperation mechanisms. More rights to the observer states was also approved, which Argentina planned to join.

The CPLP's guidelines and priorities are established by a biannual Conference of Heads of State and Government (known as the CPLP Summits)[11] and the Organization's plan of action is approved by the Council of Foreign Ministers,[12] which meets every year. Special summits can requested at any time by 2/3 of the member states, usually for the purpose of pressing matters or incidents at the moment. There are also monthly meetings of the Permanent Steering Committee that follow specific initiatives and projects.

The headquarters of the CPLP is in Penafiel Palace in Lisbon, Portugal, but the organization maintains dedicated bureaus in all of the foreign ministries of the CPLP member states.

The CPLP is financed by its member states.[3]

CPLP is a multilateral forum created to deepen cultural, economic, and political cooperation among the Lusophone (Portuguese-speaking) nations of the world.[3] The prime objectives of the CPLP are:[3]

In 2016, CPLP revised its cooperation protocol in defense, affirming the organization in the promotion of peace and security.[15]

The 2017 Exercício Felino military exercise taking place in Academia Militar das Agulhas Negras, Resende, in the state of Rio de Janeiro, Brazil, aims for the increased interoperability of the armed forces of Angola, Brazil, Cape Verde, Equatorial Guinea, Guinea-Bissau, Mozambique, Portugal, São Tomé and Príncipe, and Timor-Leste. The first phase of the exercise, known as Carta (chart) took place in Cape Verde in 2016, in which the operation was planned and executed using computer networks as a war game. The Exercício Felino was established in the year 2000.[16][17] 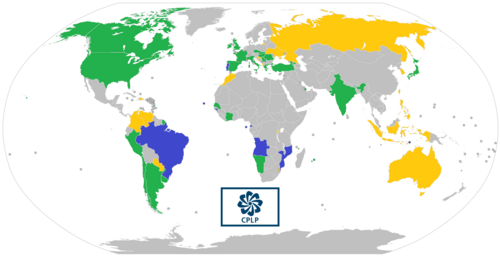 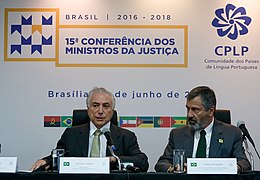 President Michel Temer of Brazil speaking at the 15th Meeting of Ministers of Justice.

There are nine full member states of the CPLP. Seven were founding members of the CPLP: Angola, Brazil, Cabo Verde, Guinea Bissau, Mozambique, Portugal, and São Tomé and Príncipe; Timor Leste joined in 2002, after achieving independence and Equatorial Guinea joined in 2014.

Macau was the last Portuguese colony to be decolonized, and returned to China in 1999. It still retains traces of Lusophone culture and Portuguese is one of the official languages of the territory. Despite that, the majority of the population in Macau do not speak and understand Portuguese; rather, Cantonese is the main language. In 2006, during the II Ministerial meeting between China and Portuguese Speaking Countries, the CPLP Executive Secretary and Deputy ambassador Tadeu Soares invited the Chief Executive of the Government of the Macau Special Administrative Region, Edmund Ho, to request the Associate Observer status for Macau.[citation needed] The Government of Macau has not yet formalized this request.

Mauritius, which was discovered by Portuguese explorers and maintains strong connections with Mozambique.[citation needed] In 2008, Senegal, with historical connections to Portuguese colonisation in Casamance, was admitted as Associate Observer.[20]

In July 2014, during the Dili summit, the Heads of State and Government approved a resolution that grants Georgia, Japan, Namibia and Turkey the status of Associate Observers.[7] Japan has had historical contacts with the Portuguese language in the 16th and 17th century, and today has connections to the Lusophone world through Japanese Brazilians in Brazil and Japan. Namibia has had extensive contact to the Lusophone world due to its location just south of Angola.

Three European nations, the Czech Republic, Hungary, and Slovakia, were admitted as observers along with Uruguay at the 2016 summit. Uruguay has historical ties to Brazil and Portugal and has some speakers of Portuñol, a Spanish–Portuguese pidgin. In January 2018 and prior to the 2018 summit, Italy requested the observer status as effort for the consolidation of bilateral relations with all of the Portuguese-speaking countries. In its request, the Italian government referred that due to the increasing number of associated observers in the community, CPLP is becoming a forum for countries in various geographical regions. Earlier in January, Andorra also formalized its candidacy for the same status.[21] Italy shares a legacy of Ancient Rome and Italy is the non-lusuophone nation with the greatest number of university chairs in the Portuguese language. Because of immigration and geographic proximity, Portuguese is one of the most spoken languages in Andorra.[22]

In the 2018 summit with all the heads of state present, with the exception of East Timor due to national policies issues, several observers joined the organization: Luxembourg, Andorra, the United Kingdom, Argentina, Serbia, Chile, France, Italy and the Organization of Ibero-American States joined as observers.[23] Uruguay, an observer nation since 2016, admitted in early 2018 a candidacy to become full member of the CPLP.[24]

The status of consultative observer is granted to organizations of civil society throughout the Lusofonia and pan-Lusophone bodies, as well as Lusophone institutions based outside of the Lusofonia, which serve a consultative status to the CPLP.[25]

The tomb of Luís de Camões is a revered space in the Lusofonia. Lusophone heads of state pay respects here on visits to Portugal.

The Portuguese-speaking countries are home to 267 million people located across the globe but having a common language, a shared history, and some cultural similarities. The CPLP nations have a combined area of about 10,742,000 square kilometres (4,148,000 sq mi), which is more than twice as large as the European Union 4,475,757 square kilometres (1,728,099 sq mi), but with a little more than half of the population.

In the early 21st century, the leaders of the CPLP believed that peace in Angola and Mozambique, as well as East Timor's independence, favored the development of the CPLP and a strengthening of multilateral cooperation. The 7th Meeting of Ministers of Culture at Sintra Palace; Portuguese Riviera, 2010.

Since many children in rural areas of Lusophone Africa and East Timor are out-of-school youth, the education officials in these regions seek help from Portugal and Brazil to increase the education to spread Portuguese fluency (like establishing Instituto Camões language center branches in main cities and rural towns), as Portuguese is becoming one of the main languages in Southern Africa, where it is also taught in Namibia and South Africa.

Angola has not yet signed the most recent accord on the orthography of the Portuguese language, and has asked other PALOP countries to support it in discussions on various points of that accord with Portugal.[26]

In many developing Portuguese-speaking nations, Portuguese is the language of government and commerce which means that Portuguese-speaking people from African nations can work and communicate with others in different parts of the world, especially in Portugal and Brazil, where the economies are stronger. Many leaders of Portuguese-speaking nations in Africa are fearful that language standards do not meet the fluency required and are therefore making it compulsory in schools so that a higher degree of fluency is achieved and young Africans will be able to speak a world language that will help them later in life.

Easing citizens' cross-border movement between the member states was proposed at the 2017 CPLP Summit.[27] This proposal by Portugal and Cape Verde to Brazil was thought by some to conflict with Europe's Schengen area. However, this free movement is based on a different model: as residence permits, associated with the recognition of academic degrees and professional qualification, and maintenance of social rights including pension systems. It would henceforth establish the Lusophone citizenship, the cidadania lusófona.[28] 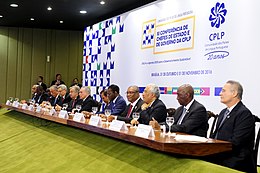 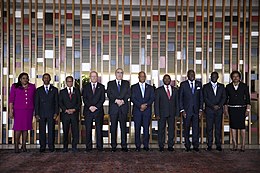 22nd Meeting of the Council of Ministers.

The Conference of Heads of State and Government of the CPLP (Portuguese: Conferência de Chefes de Estado e de Governo da Comunidade dos Países de Língua Portuguesa; CCEG), commonly known as the CPLP Summit (Cimeira da CPLP) is a biennial meeting of heads of state and heads of government of the member states of the CPLP. It is considered one of the fundamental pillars of the CPLP's structure.

The mission of the CPLP Summit is to:[29]