The Community of Latin American and Caribbean States (Spanish: Comunidad de Estados Latinoamericanos y Caribeños; Portuguese: Comunidade de Estados Latino-Americanos e Caribenhos; French: Communauté des États latino-américains et caribéens; Dutch: Gemeenschap van Latijns-Amerikaanse en Caraïbische Staten; CELAC) is a regional bloc of Latin American and Caribbean states thought out on February 23, 2010, at the Rio Group–Caribbean Community Unity Summit,[3][4][5] and created on December 3, 2011, in Caracas, Venezuela, with the signature of The Declaration of Caracas.[6] It consists of 32 sovereign countries in the Americas. Due to the focus of the organization on Latin American and Caribbean countries, other countries and territories in the Americas, Brazil, Canada and the United States, as well as the overseas territories in the Americas of France (Overseas departments and territories of France), the Netherlands (Dutch Caribbean), Denmark (Greenland) and the United Kingdom (British Overseas Territories) are not included.[7]

CELAC is the successor of the Rio Group and the Latin American and Caribbean Summit on Integration and Development (CALC).[10] In July 2010, CELAC selected President of Venezuela Hugo Chávez and President of Chile Sebastián Piñera, as co-chairs of the forum to draft statutes for the organization.[11]

The immediate predecessor of the CELAC is the Rio Group. Formed in 1986, it gathered 24 Latin American and Caribbean countries around summits to cooperate regional policy issue independently of the United States.[12]

On 16–17 December 2008, the I Latin American and Caribbean Summit on Integration and Development (CALC) took place in Costa do Sauipe, Bahia, Brazil. It was organized at the initiative of the Lula administration with the goal of building cooperation mechanism with greater autonomy from the United States and Canada. Most heads of state from Latin America and the Caribbean states attended, with the exception of President of Colombia Álvaro Uribe and President of Peru Alan García.[13] The summit finished with the signing of the Bahia Declaration, a common agenda establishing the following priorities: cooperation between mechanism of regional and subregional integration, the global financial crisis, energy, infrastructures, social development and eradication of hunger and poverty, food security, sustainable development, natural disasters, human rights promotion, migration, South–South cooperation and Latin America and Caribbean projection.[14][15]

In 2008, the Calderón administration of Mexico proposed the creation of the Latin American and the Caribbean Union (Spanish: Unión Latinoamericana y del Caribe, ULC). The proposal was formalized on 27 March 2009 at Rio Group meeting. At the initiative of Mexico, the XXI Rio Summit and the II CALC summit were held together on 22–23 February 2010 in Playa del Carmen, Mexico. The joint summit was named the Latin American and Caribbean Unity Summit and the 32 attending states decided to create the Community of Latin American and Caribbean States (CELAC), which would be formally established in 2011.[16]

Hugo Chávez, Luiz Inácio Lula da Silva and Rafael Correa were among the other prominent left-wing leaders who praised the creation of CELAC.[17]

The announcement prompted debate and discussion across Latin America and the Caribbean about whether it was more beneficial to have close ties with U.S. and Canada or to work independently.[18][19]

Raúl Zibechi, writing for Mexico's center-left La Jornada newspaper said, "The creation of the Community of Latin American and Caribbean States is part of a global and continental shift, characterized by the decline of U.S. hegemony and the rise of a group of regional blocs that form part of the new global balance."[20]

An editorial in Brazil's liberal Estadão newspaper said, "CELAC reflects the disorientation of the region's governments in relation to its problematic environment and its lack of foreign policy direction, locked as it is into the illusion that snubbing the United States will do for Latin American integration what 200 years of history failed to do."[17]

CELAC's inaugural summit was due to be held in mid-2011, but was postponed because of the ill-health of Hugo Chávez, president of the host nation, Venezuela. The summit was instead held on December 2 and 3, 2011 in Caracas.[21] It primarily focused on the global economic crisis and its effects on the region. Several leaders, including presidents Cristina Fernández de Kirchner, Dilma Rousseff and Juan Manuel Santos, encouraged an increase in regional trade, economic development, and further economic cooperation among members in order to defend their growing economies.[18][19]

Chavez, and other leaders such as Rafael Correa and Daniel Ortega, expressed hope that the bloc would work to further Latin American integration, end U.S. hegemony and consolidate control over regional affairs.[18] Chavez, citing the Monroe Doctrine as the original confirmation of U.S. interference in the region, openly called for CELAC to replace the OAS: "As the years go by, CELAC is going to leave behind the old and worn-out OAS."[19] Correa called for a new human rights commission to replace the Inter-American Commission on Human Rights. Other leaders argued that the organisation should be used as a tool to resolve regional disagreements and uphold democratic values, but not as a replacement of the OAS.[18][19] Santos stated that he would like to see dialogue within the group over whether existing counter-drug regulations should be revised.[18] The president of the Latin American Parliament (Parlatino) said he expects that Parlatino will become the main legislative institution of CELAC.[22] Amongst the key issues on the agenda were the creation of a "new financial architecture," sanction for maintaining the legal status of coca in Bolivia and the rejection of the Cuban embargo by the U.S.[23]

ESO exhibition area at the CELAC–EU summit in Santiago[25]

The EU-LAC Foundation chose CELAC to be the main organization representative of the relationship between European and Latin American and Caribbean countries.

During the summit, the region was declared a "peace zone". After three days and with the approval of participating representatives, a document with 83 focus points was created. It emphasized that, despite cultural and regional differences, unity between the participating countries is necessary in order to create progress. "Unity and the integration of our region must be gradually constructed, with flexibility, with respect to differences, diversity, and the sovereign right of each of our countries to choose our own forms of political and economic organization" stated the document. It also states which countries have been developing the best and how they are doing it in order for them to be a model for other countries.

The issue of poverty was widely discussed. Cuba's Raul Castro pointing out that throughout Latin America and the Caribbean, people want a fairer distribution of wealth, access to affordable education, employment, better salaries, and the eradication of illiteracy. He argued that CELAC countries can work together, support each other, to create new plans and solutions for these problems.[26] 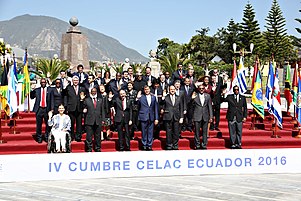 Exclusive Economic Zones of the member states of the CELAC.

Eleven countries are in South America.

Brazil suspended its membership in January 2020, citing the organization's failure to protect democracy in member states.[32]

The following table shows various data for CELAC member states, including area, population, economic output and income inequality, as well as various composite indices, including human development, viability of the state, rule of law, perception of corruption, economic freedom, state of peace, freedom of the press and democratic level. 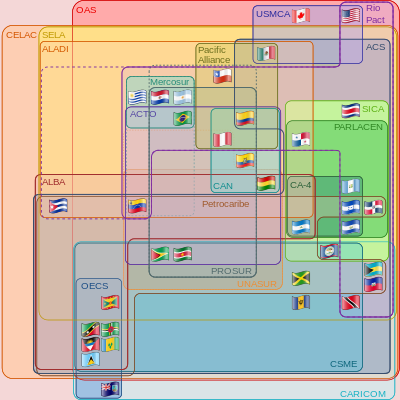