A communist party is a political party that seeks to realize the social and economic goals of communism. The term communist party was popularized by the title of The Manifesto of the Communist Party (1848) by Karl Marx and Friedrich Engels. As a vanguard party, the communist party guides the political education and development of the working class (proletariat). As the ruling party, the communist party exercises power through the dictatorship of the proletariat. Vladimir Lenin developed the idea of the communist party as the revolutionary vanguard, when social democracy in Imperial Russia was divided into ideologically opposed factions, the Bolshevik faction ("of the majority") and the Menshevik faction ("of the minority"). To be politically effective, Lenin proposed a small vanguard party managed with democratic centralism which allowed centralized command of a disciplined cadre of professional revolutionaries. Once the policy was agreed upon, realizing political goals required every Bolshevik's total commitment to the agreed-upon policy.

In contrast, the Menshevik faction included Leon Trotsky, who emphasized that the party should not neglect the importance of mass populations in realizing a communist revolution. In the course of the revolution, the Bolshevik party which became the Communist Party of the Soviet Union (CPSU) assumed government power in Russia after the October Revolution in 1917. With the creation of the Communist International (Comintern) in 1919, the concept of communist party leadership was adopted by many revolutionary parties, worldwide. In an effort to standardize the international communist movement ideologically and maintain central control of the member parties, the Comintern required that parties identify as a communist party.

Under the leadership of the CPSU, the interpretations of orthodox Marxism were applied to Russia and led to the Leninist and Marxist–Leninist political parties throughout the world. After the death of Lenin, the Comintern's official interpretation of Leninism was the book Foundations of Leninism (1924) by Joseph Stalin.

As the membership of a communist party was to be limited to active cadres in Lenin's theory, there was a need for networks of separate organizations to mobilize mass support for the party. Typically, communist parties built up various front organizations whose membership was often open to non-communists. In many countries, the single most important front organization of the communist parties was its youth wing. During the time of the Communist International, the youth leagues were explicit communist organizations, using the name 'Young Communist League'. Later the youth league concept was broadened in many countries, and names like 'Democratic Youth League' were adopted. 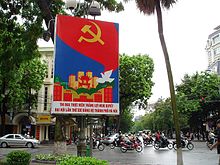 Historically, in countries where communist parties were struggling to attain state power, the formation of wartime alliances with non-communist parties and wartime groups was enacted (such as the National Liberation Front of Albania). Upon attaining state power these Fronts were often transformed into nominal (and usually electoral) "National" or "Fatherland" Fronts in which non-communist parties and organizations were given token representation (a practice known as Blockpartei), the most popular examples of these being the National Front of East Germany (as a historical example) and the United Front of the People's Republic of China (as a modern-day example). Other times the formation of such Fronts were undertaken without the participation of other parties, such as the Socialist Alliance of Working People of Yugoslavia and the National Front of Afghanistan, though the purpose was the same: to promote the communist party line to generally non-communist audiences and to mobilize them to carry out tasks within the country under the aegis of the Front.

Recent scholarship has developed the comparative political study of global communist parties by examining similarities and differences across historical geographies. In particular, the rise of revolutionary parties, their spread internationally, the appearance of charismatic revolutionary leaders and their ultimate demise during the decline and fall of communist parties worldwide have all been the subject of investigation.[1]

A uniform naming scheme for communist parties was adopted by the Communist International. All parties were required to use the name 'Communist Party of (name of the country)', resulting in separate communist parties in some countries operating using (largely) homonymous party names (e.g. in India). Today, there are a few cases where the original sections of the Communist International have retained those names. But throughout the twentieth century, many parties changed their names. Common causes for these shifts in naming were either moves to avoid state repression[citation needed] or as measures to generate greater acceptance by local populations.

An important example of the latter was the renaming of many East European communist parties after the Second World War, sometimes as a result of mergers with the local social democratic and democratic socialist parties. New names in the post-war era included "Socialist Party", "Socialist Unity Party", "People's (or Popular) Party", "Workers' Party" and "Party of Labour".

The naming conventions of communist parties became more diverse as the international communist movement was fragmented due to the Sino-Soviet split in the 1960s. Those who sided with China and Albania in their criticism of the Soviet leadership, often added words like 'Revolutionary' or 'Marxist-Leninist' to distinguish themselves from the pro-Soviet parties.

In 1985, approximately 38 percent of the world's population lived under communist governments (1.67  billion out of 4.4  billion). The CPSU's International Department officially recognized 95 ruling and nonruling communist parties. Overall, if one includes the 107 parties with significant memberships, there were approximately 82 million communist party members worldwide.[2] Given its world-wide representation, the communist party may be counted as the principal challenger to the influence of liberal-democratic, catch-all parties in the twentieth century.[3] However, in the Capitalist counter-revolutions of 1989–1991 in eastern Europe and the former Soviet Union, most of these parties either disappeared or were renamed and adopted different goals than their predecessors.

Although the historical importance of communist parties is widely accepted, their activities and functions have been interpreted in different ways. One approach, sometimes known as the totalitarian school of communist studies, has implicitly treated all communist parties as the same types of organizations. Scholars such as Zbigniew Brzezinski and Francois Furet have relied upon conceptions of the party emphasizing centralized control, a top-down hierarchical structure, ideological rigidity, and strict party discipline.[6] In contrast, other studies have emphasized the differences among communist parties. Multi-party studies, such as those by Robert C. Tucker and A. James McAdams, have emphasized the differences in both these parties' organizational structure and their use of Marxist and Leninist ideas to justify their policies.[7]

Another important question is why communist parties were able to rule for as long as they did. Some scholars have depicted these parties as fatally from their inception and only remained in power their leaders were willing to use their monopoly of power to crush all forms of opposition.[8] In contrast, other studies have emphasized these parties’ ability to adapt their policies to changing times and circumstances.[9]