The Communist Refoundation Party (Italian: Partito della Rifondazione Comunista, PRC) is a communist[2] political party in Italy that emerged from a split of the Italian Communist Party (PCI) in 1991. The party's secretary is Maurizio Acerbo, who replaced Paolo Ferrero in 2017. Armando Cossutta was the party's founder, while Fausto Bertinotti its longest-serving leader (1994–2008). The latter transformed the PRC from a traditional communist party into a collector of radical social movements.

In February 1991, when the Italian Communist Party (PCI) was transformed into the Democratic Party of the Left (PDS) under the leadership of Achille Occhetto, left-wing dissidents led by Armando Cossutta launched the Movement for Communist Refoundation. Later that year, Proletarian Democracy (DP), a far-left outfit, dissolved itself so that its members could join the PCI dissidents and form a united front of all Italian communists. In December, the PRC was officially founded and Sergio Garavini was elected secretary. In the 1992 general election, the party obtained 5.6% of the vote.

Garavini resigned from secretary in June 1993 and was replaced by Fausto Bertinotti, a trade unionist of the Italian General Confederation of Labour (CGIL) who had left the PDS only a few months before, in January 1994. In the 1994 general election, the PRC was part of the PDS-led Alliance of Progressives and obtained 6.1% of the vote. In June 1995, a group of splinters led by Lucio Magri and Famiano Crucianelli formed the Movement of Unitarian Communists (MCU), which would eventually merge with the PDS, being one of the founding members of the Democrats of the Left (DS) in February 1998.

The leadership of Bertinotti was a turning point for the party, which jumped to 8.6% of vote in the 1996 general election, fought by the party in a loose alliance with The Olive Tree, the major centre-left coalition whose dominant partner was the PDS. After the election, the PRC decided to externally support the first cabinet led by Romano Prodi, but tensions soon arose within the coalition and the party.

In October 1998, the PRC was divided between those who wanted to stop supporting Prodi's government, led by Bertinotti; and those who wanted to continue the alliance, led by Cossutta, the party's president. The central committee endorsed Bertinotti's line, but Cossutta and his followers decided to ignore this line and to support Prodi. The votes of the cossuttiani were not enough and the government lost a confidence vote in Parliament.

The dissidents, who controlled the majority of deputies and senators, split and formed a rival communist party, the Party of Italian Communists (PdCI), which immediately joined the first cabinet led by Massimo D'Alema, leader of the DS and first post-communist to hold the job of Prime Minister of Italy. Deprived of most of its parliamentary representation, the PRC fought for its existence and voters supported it rather than the PdCI, both in the 1999 European Parliament election (4.3% to 2.0%) and the 2001 general election (5.0% to 1.7%).

Despite competition from the PdCI, the PRC confirmed its status as Italy's largest communist party. Having been left by most traditional communists, it also started to enlarge its scope aiming at becoming a collector of radical social movements and, foremost, the main representative of the anti-globalization movement in Italy. The PRC also forged new alliances at the European level and was instrumental in the foundation of the Party of the European Left in May 2004.[3][4]

In October 2004, the PRC re-joined the centre-left coalition, once again led by Prodi. In April 2005, Nichi Vendola, an openly gay politician and one of the emerging leaders of the party, won a primary election and was elected president of traditionally conservative southern region of Apulia, becoming the only regional president ever belonging to the PRC.

In the 2006 general election, the PRC was part of The Union, which won narrowly over the centre-right House of Freedoms coalition and the party obtained 5.8%. After the election, Bertinotti was elected President of the Chamber of Deputies and replaced by Franco Giordano as secretary. Additionally, for the first time it entered a government by joining the Prodi II Cabinet, with Paolo Ferrero Minister of Social Solidarity and seven undersecretaries. The decision to participate in the coalition government and vote to refinance the Italian military presence in Afghanistan and send troops to Lebanon attracted criticism from sectors of the European far-left[5] and provoked the splits of several groups from the ranks of his own party, notably including the Workers' Communist Party, the Communist Alternative Party and Critical Left. Prodi, whose majority was weak and fragmented, resigned in January 2008.

For the 2008 general election, the PRC formed a joint list named Rainbow Left (SA) with the PdCI, the Federation of the Greens and the Democratic Left under Bertinotti's leadership. SA obtained a mere 3.1% (compared to 10.2% won by the constituent parties individually two years before) and no seats. Consequently, Bertinotti quit politics and Giordano resigned and after that some bertinottiani, led by Ferrero and Giovanni Russo Spena (both former Proletarian Democracy members), had forged an alliance with former cossuttiani.

At the July 2008 congress, the PRC was highly divided around ideological and regional lines with Vendola, the bertinottiani's standard-bearer, accusing northern delegates of having absorbed leghismo and stating that it was the end of the party as he knew it. The internal left-wing (which wanted to return to PRC's original communist project) finally prevailed over the bulk of bertinottiani (who insisted on the creation of a broader left-wing party) and Ferrero was elected secretary by the central committee with 50.5%.[6]

In January 2009, the faction around Vendola and Giordano, silently supported by Bertinotti, left the PRC and launched the Movement for the Left (MpS), aimed at forming a broader left-wing party,[7] which would eventually be Left Ecology Freedom (SEL).

In the run-up of the 2009 European Parliament election, the PRC formed along with the PdCI and minor groups, the Anticapitalist and Communist List,[8] obtaining 3.4% of the vote and no MEPs.

In April 2017, Ferrero was replaced as secretary by Maurizio Acerbo, a former member of the Chamber of Deputies.[14][15][16] 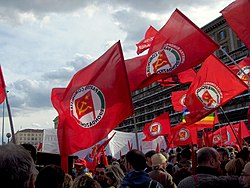 The majority of the party following the October 2004 congress was led by Fausto Bertinotti (59.2%) and viewed the PRC as the representative of the anti-globalization movement in Italy. Other factions strongly opposed Bertinotti's innovations. These included the hard-line traditionalist Being Communists (26.2%) which was composed of former followers of Armando Cossutta as well as the Trotskyists of Critical Left, Communist Project and HammerSickle (14.6% together). Communist Project, which opposed the party's participation in the Prodi II Cabinet, unfolded shortly after the 2006 general election. A group led by Francesco Ricci established the Communist Alternative Party, others, led by the Trotskyite Marco Ferrando, formed the Workers' Communist Party, while a tiny minority chose to stay in the party and launched Countercurrent.

In February 2007, senator Franco Turigliatto of Critical Left, led by Salvatore Cannavò, voted twice against the government's foreign policy, leading Romano Prodi to temporarily resign from Prime Minister. In April, Turigliatto was expelled from the party and Critical Left was suspended from it, leading to its final split and establishment as a party in December. Turigliatto's ejection was supported also by Claudio Grassi (leader of Being Communists) and this caused a break-up of the faction. A group led by Fosco Giannini launched an alternative faction named The Ernesto (from the eponymous communist publication), but it would suffer the 2008 split of Communist Left, which would splinter in 2011 into Communist Left and Communists Together/The Future City.

Following the severe defeat of the party in the 2008 general election, a group of bertinottiani composed mainly of former members of Proletarian Democracy and led by Paolo Ferrero and Giovanni Russo Spena allied with the other minority factions, notably including Being Communists, to force Franco Giordano's resignation from secretary. Subsequently, in the July congress Ferrero's and Grassi's Refoundation in Movement motion (40.1%) faced the bulk of bertinottiani, who organized themselves around a motion named "Manifesto for the Refoundation" (47.6%) with Nichi Vendola as standard-bearer. Giannini's The Ernesto and Countercurrent (7.7%), Claudio Bellotti's HammerSickle (3.2%) and a minor group of former bertinottiani called "Disarm, Renew, Refound" (1.5%) joined forces with the Ferrero-Grassi group. Vendola, defeated by Ferrero, announced the creation of a new minority faction, Refoundation for the Left (RpS).[6][20]

RpS finally left the party in 2009 to form the Movement for the Left (MpS), but some of its members, led by Augusto Rocchi, decided to stay in the PRC[21] and launched To the Left with Refoundation.[22] However, the alliance between Ferrero and the traditionalists did not last. The Ernesto joined the PdCI in 2011 while Being Communists divided in two groups, both eventually quitting the party. One group joined SEL in 2014[23] and was later merged into the Democratic and Progressive Movement (MDP) in 2016;[24] a second, larger group (including Grassi) participated in the foundation of SEL's successor, Italian Left (SI).[25]

In the 2017 congress, two motions were presented by Ferrero and Eleonora Forenza, respectively.[26] The coalition of factions led by Ferrero prevailed with the vote of 71.5% of party members.[27] Consequently, Maurizio Acerbo, supported by Ferrero,[28] was elected secretary by the central committee.[29]

The electoral results of the PRC in the ten most populated regions of Italy are shown in the table below.[30]