There are a number of systems of communication in Uganda, including a system of telephony, radio and television broadcasts, internet, mail, and several newspapers. The use of phones and the internet in Uganda has rapidly increased in the last few years.

The postal service of for the protectorates of British East Africa and Uganda was called East Africa and Uganda Protectorates, and operated from April 1, 1903 to July 22, 1920. From 1948 to 1977, postal service in Kenya, Tanzania and Uganda was provided by the East African Posts and Telecommunications Corporation. With the decolonization of Africa, Uganda took over control of its postal system, although until 1961 stamps from the colonial postal system were being issued alongside Uganda's stamps. 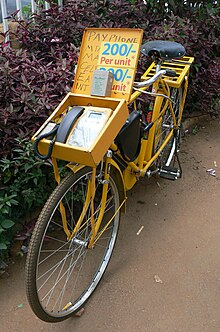 A payphone is mounted on a bicycle in Uganda. 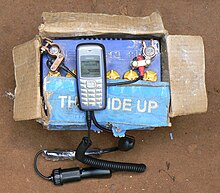 A cell phone being charged from a car battery in Uganda.

As of June 2018, the telephone communications system was described by the CIA factbook as "developed through private partnerships", with "over 1,800 kilometres (1,118 mi) of fiber optics", and 4G network available in most major cities and national parks, and 3G service available in second-tier urban centers. [2] As of 2004, Uganda Telecom Limited (UTL), Celtel and MTN Uganda Limited were the three telecommunications operators licensed by the Uganda Communications Commission.[1]

As of March 2010, telephone traffic within is carried by wire. Microwave radi relay, and radiotelephone communication stations are used in domestic telecommunications as well, and fixed and mobile cellular systems are used for short range traffic.[2]

As of March 2010, international telephone communication is catered for by an Intelsat and an Inmarsat satellite earth station, along with analog links to Kenya and Tanzania. The international calling code is 256.[2]

MTN was the first mobile operator to offer Internet services in Uganda via GPRS, but Orange (France Telecom) was the first to popularize mobile Internet by offering 3G services after joining the market in 2009. Orange eventually divested from many anglophone markets in Africa, and their Uganda operating company was purchased by Africell Uganda in 2014.[6]

In December 2015, Google launched its first wi-fi network in Kampala.[10]

In September 2009 the OpenNet Initiative found little or no evidence of Internet filtering in all four areas (political, social, conflict/security, and Internet tools) for which it tests.[11]

Though Uganda has made great technological strides in recent years, the country still faces a number of challenges in obtaining affordable, reliable Internet bandwidth. This, rather than a formal government-sponsored filtering regime, is the major obstacle to Internet access. Just prior to the presidential elections in February 2006, the Uganda Communications Commission (UCC) blocked the anti-government Web site RadioKatwe in the only internationally reported case of Internet filtering in Uganda to that date.[11]

During the 2016 parliamentary elections, the government ordered the blocking of social media for 72 hours (18-21 February).[12]

In July 2018, Uganda instituted a tax on "over the top" messaging and voice services, which includes social networks. Users must may a fee of 200 shillings (approx $0.06 USD) daily in order to use these services. The stated purpose of the law is to provide additional government revenue, and to control "gossip" being spread over these platforms. VPN services have also been blocked, after they were used by citizens to circumvent the tax.[13] Amnesty International condemned the tax as being "a clear attempt to undermine the right to freedom of expression".[14][15] Internet usage fell significantly after the tax was introduced.[16]