Intentional community Anarchism and religion Anarchist schools of thought
This article is about a group of people sharing a common life. For administrative units and other uses, see Commune (disambiguation).
"Communal" redirects here. For the political system, see Communalism. For the South Asian sectarian ideologies, see Communalism (South Asia).
Not to be confused with Comune (Italy).
Community of people living together, sharing common interests 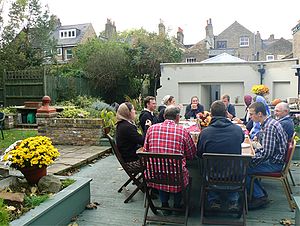 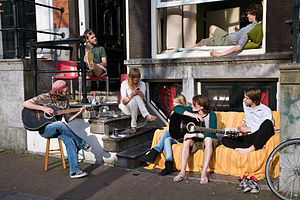 Young musicians living in a shared community in Amsterdam

A commune[a] is an intentional community of people sharing living spaces, interests, values, beliefs, and often property, possessions, and resources in common. In some communes, the people also share common work, income or assets.[2]

In addition to the communal economy, consensus decision-making, non-hierarchical structures and ecological living have become important core principles for many communes. There are many contemporary intentional communities all over the world, a list of which can be found at the Fellowship for Intentional Community (FIC).[3]

Many communal ventures encompass more than one of these categorizations. Some communes, such as the ashrams of the Vedanta Society or the Theosophical commune Lomaland, formed around spiritual leaders, while others formed around political ideologies. For others, the "glue" is simply the desire for a more shared, sociable lifestyle.

The central characteristics of communes, or core principles that define communes, have been expressed in various forms over the years. Before 1840 such communities were known as "communist and socialist settlements"; by 1860, they were also called "communitarian" and by around 1920 the term "intentional community"[citation needed] had been added to the vernacular of some theorists. The term "communitarian" was invented by the Suffolk-born radical John Goodwyn Barmby, subsequently a Unitarian minister.[5]

At the start of the 1970s, The New Communes author Ron E. Roberts classified communes as a subclass of a larger category of Utopias.[6] He listed three main characteristics. Communes of this period tended to develop their own characteristics of theory though, so while many strived for variously expressed forms of egalitarianism, Roberts' list should never be read as typical. Roberts' three listed items were: first, egalitarianism – that communes specifically rejected hierarchy or graduations of social status as being necessary to social order. Second, human scale – that members of some communes saw the scale of society as it was then organized as being too industrialized (or factory sized) and therefore unsympathetic to human dimensions. And third, that communes were consciously anti-bureaucratic.[6]

Twenty five years later, Dr. Bill Metcalf, in his edited book Shared Visions, Shared Lives defined communes as having the following core principles: the importance of the group as opposed to the nuclear family unit, a "common purse", a collective household, group decision making in general and intimate affairs.[7] Sharing everyday life and facilities, a commune is an idealized form of family, being a new sort of "primary group" (generally with fewer than 20 people although again there are outstanding examples of much larger communes or communes that experienced episodes with much larger populations). Commune members have emotional bonds to the whole group rather than to any sub-group, and the commune is experienced with emotions which go beyond just social collectivity.[7]

Communes around the world

With the simple definition of a commune as an intentional community with 100% income sharing, the online directory of the Fellowship for Intentional Community (FIC)[3] lists 222 communes worldwide (28 January 2019).[8] Some of these are religious institutions such as abbeys and monasteries. Others are based in anthroposophic philosophy, including Camphill villages that provide support for the education, employment, and daily lives of adults and children with developmental disabilities, mental health problems or other special needs.[9] Many communes are part of the New Age movement.

Many cultures naturally practice communal or tribal living, and would not designate their way of life as a planned 'commune' per se, though their living situation may have many characteristics of a commune.

In Germany, a large number of the intentional communities define themselves as communes and there is a network of political communes called "Kommuja"[10] with about 30 member groups (May 2009). Germany has a long tradition of intentional communities going back to the groups inspired by the principles of Lebensreform in the 19th century. Later, about 100 intentional communities were started in the Weimar Republic after World War I; many had a communal economy. In the 1960s, there was a resurgence of communities calling themselves communes, starting with the Kommune 1 in Berlin, followed by Kommune 2 (also Berlin) and Kommune 3 in Wolfsburg.

In the German commune book, Das KommuneBuch, communes are defined by Elisabeth Voß as communities which:[11] 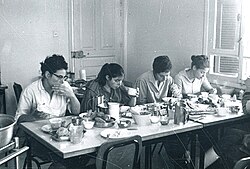 Kibbutzim in Israel, (sing., kibbutz) are examples of officially organized communes, the first of which were based on agriculture. Today, there are dozens of urban communes growing in the cities of Israel, often called urban kibbutzim. The urban kibbutzim are smaller and more anarchist.[12] Most of the urban communes in Israel emphasize social change, education, and local involvement in the cities where they live. Some of the urban communes have members who are graduates of zionist-socialist youth movements, like HaNoar HaOved VeHaLomed, HaMahanot HaOlim and Hashomer Hatsair.[13]

In 1831 John Vandeleur (a landlord) established a commune on his Ralahine Estate at Newmarket-on-Fergus, Co. Clare. Vandeleur asked Edward Thomas Craig, an English socialist, to formulate rules and regulations for the commune. It was set up with a population of 22 adult single men, 7 married women and their 7 husbands, 5 single women, 4 orphan boys and 5 children under the age of 9 years. No money was employed, only credit notes which could be used in the commune shop. All occupants were committed to a life with no alcohol, tobacco, snuff or gambling. All were required to work for 12 hours a day during the summer and from dawn to dusk in winter. The social experiment prospered for a time and 29 new members joined. However, in 1833 the experiment collapsed due to the gambling debts of John Vandeleur. The members of the commune met for the last time on 23 November 1833 and placed on record a declaration of "the contentment, peace and happiness they had experienced for two years under the arrangements introduced by Mr. Vandeleur and Mr. Craig and which through no fault of the Association was now at an end".[14]

In imperial Russia, the vast majority of Russian peasants held their land in communal ownership within a mir community, which acted as a village government and a cooperative.[15][16] The very widespread and influential pre-Soviet Russian tradition of Monastic communities of both sexes could also be considered a form of communal living. After the end of communism in Russia, monastic communities have again become more common, populous and, to a lesser degree, more influential in Russian society. Various patterns of Russian behavior — toloka (толока), pomochi (помочи), artel (артель) — are also based on communal ("мирские") traditions.

A 19th century advocate and practitioner of communal living was the utopian socialist John Goodwyn Barmby, who founded a Communist Church before becoming a Unitarian minister.[17] The UK today has several communes or intentional communities, increasing since the New Towns Act 1946 to recuperate a lost sense of community at the centralization of population in Post-War New Towns such as Crawley or Corby.

The Simon Community in London is an example of social cooperation, made to ease homelessness within London. It provides food and religion and is staffed by homeless people and volunteers.[18] Mildly nomadic, they run street "cafés" which distribute food to their known members and to the general public. 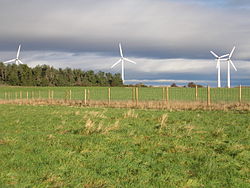 The wind turbines at Findhorn, which make the Ecovillage a net exporter of electricity.

The Bruderhof[19] has three locations in the UK[20] and follows the example of the earliest Christians in the Book of Acts by living in community and sharing all things in common.[21] In Glandwr, near Crymych, Pembrokeshire, a co-op called Lammas Ecovillage focuses on planning and sustainable development. Granted planning permission by the Welsh Government in 2009, it has since created 9 holdings and is a central communal hub for its community.[22] In Scotland, the Findhorn Foundation founded by Peter and Eileen Caddy and Dorothy Maclean in 1962[23] is prominent for its educational centre and experimental architectural community project based at The Park, in Moray, Scotland, near the village of Findhorn.[24]

The Findhorn Ecovillage community at The Park, Findhorn, a village in Moray, Scotland, and at Cluny Hill in Forres, now houses more than 400 people.[25]

There is a long history of communes in America (see this short discussion of Utopian communities) which led to the rise in the communes of the hippie movement—the "back-to-the-land" ventures of the 1960s and 1970s.[26] One commune that played a large role in the hippie movement was Kaliflower, a utopian living cooperative that existed in San Francisco between 1967 and 1973 built on values of free love and anti-capitalism.

Andrew Jacobs of The New York Times wrote that "after decades of contraction, the American commune movement has been expanding since the mid-1990s, spurred by the growth of settlements that seek to marry the utopian-minded commune of the 1960s with the American predilection for privacy and capital appreciation."[27] (See Intentional community). The Fellowship for Intentional Community (FIC) is the best source for listings of and more information about communes in the United States.

While many American communes are short lived, some have been in operation for over 50 years. The Bruderhof was established in the US in 1954,[28] Twin Oaks in 1967[29] and Koinonia Farm in 1942.[30] Twin Oaks is a rare example of a non-religious commune surviving for longer than 30 years.

As of 2010[update], the Venezuelan state has initiated the construction of almost 200 "socialist communes" which are billed as autonomous and independent from the government. The communes purportedly have their own "productive gardens" that grow their own vegetables as a method of self-supply. The communes also make independent decisions in regards to administration and the use of funding.[31] The idea has been denounced[by whom?] as an attempt to undermine elected local governments, since the central government could shift its funding away from these in favor of communes, which are overseen by the federal Ministry of Communes and Social Protection.[32]