Advertisement - You can get this game from STEAM
This article is about the business concept. For other uses, see Commerce (disambiguation). 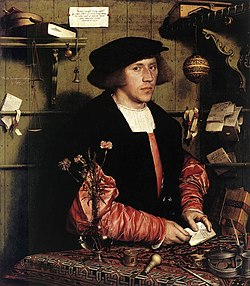 Commerce is the exchange of goods and services, especially on a large scale.[1] It includes legal, economic, political, social, cultural and technological systems that operate in a country or in international trade.

In the economic sense, "commerce" refers to the conduct of trade among economic agents.[2] Commerce generally affects the well-being and welfare of citizens and residents, as it is known[by whom?] to directly impact the money which people have and their job opportunities as well. The term "commerce" may also refer to the buying and selling of commodities globally or across borders - between governments and between business firms.[citation needed]

Many[quantify] scholars and ancient philosophers have known[by whom?] to mix up the terms "trade" and "commerce". But in essence these two are distinct terms carrying different meanings:

Nevertheless, one can speak of "trade in goods and services".[3]

The caduceus - used today as the symbol of commerce,[5] and traditionally associated with the Roman god Mercury, patron of commerce, trickery and thieves.

Apart from traditional self-sufficiency, trading became a principal[citation needed] facility of prehistoric people, who bartered what they had for goods and services from each other (the barter system was popular in ancient times where one could get goods and services by offering the other person some other good and service according to their need instead of paying with monetary systems, which developed later). Historian Peter Watson and Ramesh Manickam date the history of long-distance commerce from circa 150,000 years ago.[6] Roman commerce included routes across the Mediterranean and to and from India.

In historic times, the introduction of currency as a standardized money facilitated the wider exchange of goods and services. Numismatists have collections of tokens, which include coins from some Ancient-World large-scale societies, although initial usage involved unmarked lumps of precious metal.[7] This means that even if there were no notes or coins people used precious metal like Gold, Silver etc. attached a value to it and then use them for exchange in return for commodities.

The circulation of a standardized currency provides a method of overcoming the major disadvantage to commerce through use of a barter system, the "double coincidence of wants" (which means if someone wants something from a person, that person should also be in need of a thing or a service which they can provide), necessary for barter trades to occur. For example, if a person who makes pots for a living needs a new house, they may wish to hire someone to build it for them. But they cannot make an equivalent number of pots to equal this service done for them, because even if the builder could build the house, the builder might not want many or need any pots.

The barter system also has a major drawback in that whatever goods a person gets as payment may not necessarily store for long amounts of time. For example: if a person receives dozens of fruits as payment, the fruit may not store for long or may rot - which means that person will have to bear a loss.

Currency alleviated these problems by allowing a society as a whole to assign values[citation needed] and thus to collect goods and services effectively and to store them for later use, or to split them among minions.

During the Middle Ages, European commerce developed through the trading of luxury goods at trade fairs. Some[quantify] wealth became converted into movable wealth or capital.[citation needed] Banking systems developed where money on account was transferred[by whom?] across national boundaries.[8] Hand-to-hand markets became a feature of town life, and were regulated by town authorities.[9]

Today[update] commerce includes as a subset of itself a complex system of companies which try to maximize their profits by offering products and services to the market (which consists both of individuals and groups and other companies or institutions) at the lowest production cost. A system of international trade has helped to develop the world economy; but, in combination with bilateral or multilateral agreements to lower tariffs or to achieve free trade, has sometimes harmed third-world markets for local products (see Globalization).

A majorly important component of commerce is trade. It is essentially a smaller version of commerce in a way that it refers to the actual buying and selling of goods only. Commerce includes all the activities related to trade such as: