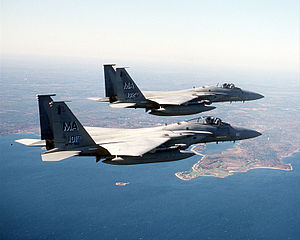 Combat air patrol (CAP) is a type of flying mission for fighter aircraft. A combat air patrol is an aircraft patrol provided over an objective area, over the force protected, over the critical area of a combat zone, or over an air defense area, for the purpose of intercepting and destroying hostile aircraft before they reach their target. Combat air patrols apply to both overland and overwater operations, protecting other aircraft, fixed and mobile sites on land, or ships at sea.

Known by the acronym CAP, it typically entails fighters flying a tactical pattern around or screening a defended target, while looking for incoming attackers. Effective CAP patterns may include aircraft positioned at both high and low altitudes, in order to shorten response times when an attack is detected. Modern CAPs are either GCI or AWACS-controlled to provide maximum early warning for defensive reaction.

The first CAPs were characteristic of aircraft carrier operations, where CAPs were flown to protect a carrier battle group, but the term has become generic to both land-based and naval flight operations. Capping operations differ from fighter escorts in that the CAP force is not tied to the group it is protecting, is not limited in altitudes and speeds it flies, and has tactical flexibility to engage a threat. Fighter escorts typically stay with the asset they are supporting and at the speed of the supported group, as a final reactive force against a close threat. When an escort engages, the supported force is left unprotected.

This section applies only to United States forces. Numerous types of combat air patrols have been employed by US military forces since World War II: