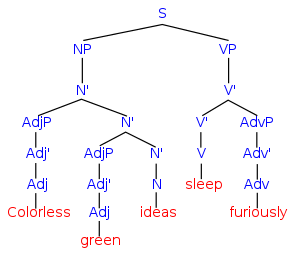 Colorless green ideas sleep furiously is a sentence composed by Noam Chomsky in his 1957 book Syntactic Structures as an example of a sentence that is grammatically correct, but semantically nonsensical. The sentence was originally used in his 1955 thesis The Logical Structure of Linguistic Theory and in his 1956 paper "Three Models for the Description of Language".[1]:116 Although the sentence is grammatically correct, no obvious understandable meaning can be derived from it, and thus it demonstrates the distinction between syntax and semantics. As an example of a category mistake, it was used to show the inadequacy of certain probabilistic models of grammar, and the need for more structured models.

It is fair to assume that neither sentence (1) nor (2) (nor indeed any part of these sentences) has ever occurred in an English discourse. Hence, in any statistical model for grammaticalness, these sentences will be ruled out on identical grounds as equally "remote" from English. Yet (1), though nonsensical, is grammatical, while (2) is not grammatical.[2][1]

While the meaninglessness of the sentence is often considered fundamental to Chomsky's point, Chomsky was only relying on the sentences having never been spoken before. Thus, even if one were to ascribe a likely and reasonable meaning to the sentence, the grammaticality of the sentence is concrete despite being the first time a person had ever uttered the statement, or any part thereof in such a combination. This was used then as a counter-example to the idea that the human speech engine was based upon statistical models, such as a Markov chain, or simple statistics of words following others.

The sentence can be partially interpreted through polysemy. Both green and colorless have figurative meanings, which allow colorless to be interpreted as "nondescript" and green as either "immature" or pertaining to environmental consciousness. The sentence can therefore be construed as "nondescript immature ideas have violent nightmares", a phrase with less oblique semantics. In particular, the phrase can have legitimate meaning too, if green is understood to mean "newly formed" and sleep can be used to figuratively express mental or verbal dormancy. "Furiously" remains problematic when applied to the verb "sleep", since "furiously" denotes "angrily", "violently", and "intensely energetically", meanings which are generally incompatible with sleep, dormancy, and unconscious agents typically construed as conscious ones, e.g. animals or humans, which truly "sleep".[3]

Writers have attempted to provide the sentence meaning through context, one of the first of which were written by Russian-American linguist Roman Jakobson (1959)[4] and Chinese linguist Yuen Ren Chao (1997).[5] John Hollander wrote a poem titled "Coiled Alizarine" in his book The Night Mirror which ends with Chomsky's sentence. Clive James wrote a poem titled "A Line and a Theme from Noam Chomsky" in his book Other Passports: Poems 1958–1985. It opens with Chomsky's second meaningless sentence and discusses the Vietnam War.

In 1985, a literary competition was held at Stanford University in which the contestants were invited to make Chomsky's sentence meaningful using not more than 100 words of prose or 14 lines of verse.[6] An example entry from the competition, from C.M. Street, is:

It can only be the thought of verdure to come, which prompts us in the autumn to buy these dormant white lumps of vegetable matter covered by a brown papery skin, and lovingly to plant them and care for them. It is a marvel to me that under this cover they are labouring unseen at such a rate within to give us the sudden awesome beauty of spring flowering bulbs. While winter reigns the earth reposes but these colourless green ideas sleep furiously.

Fernando Pereira of the University of Pennsylvania has fitted a simple statistical Markov model to a body of newspaper text, and shown that under this model, Furiously sleep ideas green colorless is about 200,000 times less probable than Colorless green ideas sleep furiously.[7]

The game of exquisite corpse is a method for generating nonsense sentences. It was named after the first sentence generated in the game in 1925: Le cadavre exquis boira le vin nouveau (the exquisite corpse will drink the new wine).

In the popular game of "Mad Libs", a chosen player asks each other player to provide parts of speech without providing any contextual information (e.g., "Give me a proper noun", or "Give me an adjective"), and these words are inserted into pre-composed sentences with a correct grammatical structure, but in which certain words have been omitted. The humor of the game is in the generation of sentences which are grammatical but which are meaningless or have absurd or ambiguous meanings (such as 'loud sharks'). The game also tends to generate humorous double entendres.

There are likely earlier examples of such sentences, possibly from the philosophy of language literature, but not necessarily uncontroversial ones, given that the focus has been mostly on borderline cases. For example, followers of logical positivism hold that "metaphysical" (i.e. not empirically verifiable) statements are simply meaningless; e.g. Rudolf Carnap wrote an article where he argued that almost every sentence from Heidegger was grammatically correct, yet meaningless.

The philosopher Bertrand Russell used the sentence "Quadruplicity drinks procrastination" in his "An Inquiry into Meaning and Truth" from 1940, to make a similar point;[8] W.V. Quine took issue with him on the grounds that for a sentence to be false is nothing more than for it not to be true; and since quadruplicity doesn't drink anything, the sentence is simply false, not meaningless.[9]

In a sketch about linguistics, British comedy duo Fry and Laurie used the nonsensical sentence "Hold the newsreader's nose squarely, waiter, or friendly milk will countermand my trousers."[10]

Another approach is to create a syntactically-correct, easily parsable sentence using nonsense words; a famous such example is "The gostak distims the doshes". Lewis Carroll's Jabberwocky is also famous for using this technique, although in this case for literary purposes; similar sentences used in neuroscience experiments are called Jabberwocky sentences. In Russian schools of linguistics, the glokaya kuzdra example has similar characteristics.

Other arguably "meaningless" utterances are ones that make sense, are grammatical, but have no reference to the present state of the world, such as Russell's The present King of France is bald from On Denoting[11] (also see definite description).

The Star Trek TNG episode Darmok features a race that communicates entirely by referencing folklore and stories. While the vessel's universal translator correctly translates the characters and places from these stories, it fails to decipher the intended meaning, leaving Captain Picard unable to understand the alien.