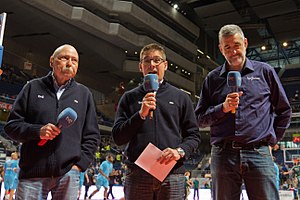 The term color refers to levity and insight provided by a secondary announcer. A sports color commentator customarily works alongside the play-by-play broadcaster.[4][5][6]

Canada and the United States

Commentary teams typically feature one professional commentator describing the passage of play, and another, usually a former player or coach, providing supplementary input as the game progresses. The color commentator will usually restrict his input to periods when the ball or puck is out of play or there is no significant action on the field and will defer to the main commentator whenever there is a shot on goal or other significant event, sometimes resulting in their being talked-over or cut short by the primary commentator. Additionally, former players and managers appear as pundits, carrying out a similar role to the co-commentator during the pre-game show preceding a given contest and the post-game show following it. In American motorsports coverage, there may be as many as two color commentators in the booth for a given broadcast.[7] A rules analyst, typically a former official, may comment on rules enforcement and replays.[8]

In the United Kingdom, the role of "color commentator" is largely unknown; the equivalent role is usually called "summariser" but also known as "analyst", "pundit", or simply "co-commentator". Cricket coverage on ESPNcricinfo uses similar terminology.

The term is not used in Australia. Those giving the analysis alongside the main commentator are sometimes said to be giving additional or expert analysis, or "special comments", or may be referred to as "expert commentators".

For soccer broadcasts on Latin American sports television channels, this type of commentator is called a comentarista in both Spanish and Portuguese, in contrast with the narrador, locutor (Portuguese) or relator (Spanish) who leads the transmission. There is no mention or translation to the term "color".