Colonie /ˌkɒləˈniː/ is a town in Albany County, New York, United States. It is the most populous suburb of Albany, New York, and is the third largest town in area in Albany County, occupying about 11% of the county. Several hamlets exist within the town. As of the 2010 census, the town had a total population of 81,591.

The name is derived from the Dutch Colonye or "Colonie", derived from the Colonie of Rensselaerswyck. All the land outside the Village of Beverwyck (now Albany) was referred to as the "Colonie". The town of Colonie is north of Albany and is at the northern border of the county. Within the town of Colonie are two villages, one also known as Colonie and the other known as Menands. 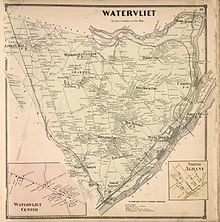 This area was once part of the Rensselaerwyck manor. The town of Colonie was formed in 1895 after the rural residents of the town of Watervliet opposed the state's proposal to transform the entire town into a city of Watervliet. The town and village of Green Island was also split off as a town from the town of Watervliet a year later and the village of West Troy that remained became the current city of Watervliet. All debts from the original town were divided proportionally between Green Island, Watervliet, and Colonie. Several lawsuits worked their way through the court system from the results of division.[5] The original town of Watervliet was the "mother of towns" in Albany County, having once been all the land outside of the city of Albany within the county,[6] all current towns either were formed directly or indirectly from a town formed from Watervliet. The central part of the town was once the location of the extensive Shaker community farms. The Watervliet Shaker Historic District is located in Colonie. Much of that land is now occupied by the Albany International Airport.[citation needed]

Through to the 1930s, Colonie was a simple series of extensive farms and a few hamlets. However, in the post-war years, there was intensive suburban development, originally on the corridor that connected Albany and Schenectady, but quickly throughout the entire township. By 1980, suburban development had saturated the community. At the same time, there were large highways (I-87, I-787, US Rt. 9 and NY Rt. 7) constructed which drastically changed the nature of the town and life there. The Colonie of the 1990s and beyond has become an entirely different community from the town of the 1930s and 1940s.[citation needed]

The Casparus F. Pruyn House at Newtonville is open to the public as the historical and cultural arts center for the Town of Colonie.

A number of sites in Colonie are included on the U.S. National Register of Historic Places,[7] including -

The current town supervisor is Paula Mahan, a Democrat. She was elected to her first term in November 2007, defeating long-time Republican incumbent Mary Brizzell. In November 2009, Mahan was re-elected to a second term, defeating former Republican Albany County Executive/former New York State Senator Michael J. Hoblock. In November 2011, Mahan was re-elected to a third term, defeating former New York State Department of Environmental Conservation Commissioner and the former Director of the town's Planning and Economic Development Committee, Denise Sheehan, by less than 400 votes. She was re-elected in 2013 to a fourth term by defeating political newcomer Todd A. Drake. The town board has six members, with four-year terms; three members are elected every odd-numbered year.

On May 4, 2010, the town of Colonie was awarded the 2010 International Association of Fire Chiefs' "Heartsafe Community" award for making significant advances in emergency cardiac care. On August 28, 2010, the New York State EMS Council awarded the town of Colonie Emergency Medical Services Department the New York State "EMS Agency of the Year" award.

Firefighting service in the town is primarily provided by one of twelve (mostly volunteer) firefighting agencies and one paid fire brigade. (See also Administrative divisions of New York.)

The Albany International Airport Fire Brigade consists of a full-time paid crash/fire/rescue staff, three crash/rescue vehicles, a mini pumper, hazmat truck, foam re-supply truck, and a full-size pumper. However, the airport's fire units stay on Airport Authority property most of the time, and are housed in yet another fire station that is on the Airport Authority's property. Occasionally, the Airport Fire Brigade responds to mutual aid requests with the bordering Shaker Road-Loudonville Fire Department, as well as other fire agencies within the town of Colonie and Albany County.

The town of Colonie is also home to the Christian Brothers Academy, as well as several private and/or religious elementary schools. Siena College is located in the hamlet of Loudonville. Bryant & Stratton College, a proprietary college, is in the town of Colonie. Colonie was formerly home to a campus of ITT Technical Institute,

The Town of Colonie operates and maintains over 850 acres of property and facilities, including the 130-acre Crossings Park, the 160-acre Mohawk River Park and Pool, the 12-acre Mohawk Riverside Landing Park, the 36-hole Town of Colonie Golf Course, the 43-acre Schuyler Flatts Cultural Park, a 5.5 mile section of the Mohawk Hudson Bike/Hike Trail, and other sports facilities and pocket parks.[15]

There are two dedicated weekly newspapers for parts of the town, the Colonie Spotlight and Loudonville Spotlight. Also, Channel 9 on Spectrum News in the town is a Public-access television station devoted to town news, programming, and events. The studios are located inside the William K. Sanford town library on Albany Shaker road.

Although not entirely dedicated to the town of Colonie, the headquarters and distribution center for the Capital Region's major daily newspaper, Times Union (owned by the Hearst Corporation), lies within the town.