Colombia Indigenous peoples in Colombia History of the Jews in Colombia
For other uses, see Colombian.
Citizens, or natives, of Colombia

Colombians (Spanish: Colombianos) are people identified with the country of Colombia. This connection may be residential, legal, historical or cultural. For most Colombians, several (or all) of these connections exist and are collectively the source of their being Colombian.

Colombia is a multiethnic society, home to people of various ethnic, religious and national origins. As a result, majority of Colombians do not equate their nationality with their ethnicity but with allegiance to Colombia, while embracing and espousing the aforementioned simultaneously.

The majority of the Colombian population is made up of Old World immigrants and their descendants. Following the initial period of Spanish conquest and immigration, different waves of immigration and settlement of non-indigenous peoples took place over the course of nearly six centuries and continue today. Elements of indigenous Amerindian and more recent immigrant customs, languages and religions have combined to form the culture of Colombia and thus a modern Colombian identity.

Most Colombians of European descent are primarily descended from Spanish settlers, while other Europeans arrived during the 19th and 20th centuries. These migrations primarily brought Irish, British, Dutch, German, Swiss, Danish, Norwegian, Portuguese, Belgian, Russian, French and Italian immigrants who migrated to the Caribbean region. There are smaller numbers of Polish, Hungarian, Bulgarian, Lithuanian, Ukrainian, Czech, Greek and Croatian communities that immigrated during the Second World War and the Cold War.[citation needed]

Main articles: Arab Colombians and History of the Jews in Colombia

Many Colombians are descended from Lebanon, Jordan, Syria and Palestine, who moved to Colombia to escape the repression of the Turkish Ottoman Empire and/or financial hardships. When they were first processed in Colombia's ports, they were classified as "Turks". It is estimated that Colombia has a Lebanese population of 700,000 direct descendants and 1,500,000 who have partial ancestry. Most Syrian-Lebanese immigrants established themselves in the Caribbean Region of Colombia in the towns of Santa Marta, Lorica, Fundación, Aracataca, Ayapel, Calamar, Ciénaga, Cereté, Montería and Barranquilla near the basin of the Magdalena River. Many Arab-Colombians adapted their names and surnames to the Spanish language to assimilate more quickly in their communities. Some Colombian surnames of Arab origin include: Guerra (originally Harb), Domínguez (Ñeca), Durán (Doura), Lara (Larach), Cristo (Salibe), among other surnames.

There are about 8,000 Colombians of Jewish origin who practice Judaism, most of them live in Bogotá. Ashkenazi, German, and Sephardi Jews run their independent religious organizations. The Confedracíon de Asociaiones Judía de Colombia coordinates Jews and institutions that practice the religion.

Consequently, there were other immigrants from the Middle East, including a number of Armenian, Turkish, Georgian and Cypriot immigrants who arrived in the country during the early 20th century. 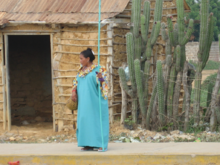 The Wayuu represent the largest indigenous ethnic group in Colombia.

Originally, Colombia's territory was inhabited entirely by Amerindian groups. Colombia's indigenous cultures evolved from three main groups—the Quimbayas, who inhabited the western slopes of the Cordillera Central; the Chibchas; and the Kalina (Caribs). The Muisca culture, a subset of the larger Chibcha ethnic group and famous for their use of gold, were responsible for the legend of El Dorado. Today indigenous people comprise roughly 3.4% of the population in Colombia.[18] More than fifty different indigenous ethnic groups inhabit Colombia. Most of them speak languages belonging to the Chibchan and Cariban language families.[citation needed]

Historically there are 567 reserves (resguardos) established for indigenous peoples and they are inhabited by more than 800,000 people. The 1991 constitution established that their native languages are official in their territories, and most of them have bilingual education systems teaching both native languages and Spanish. Some of the largest indigenous groups are the Wayuu,[19] the Arhuacos, the Muisca, the Kuna people, the Witoto, the Páez, the Tucano and the Guahibo. The departaments (departamentos) with the biggest indigenous population are Cauca, La Guajira and Nariño.[citation needed]

The majority of Asian Colombians are descended from East Asia, South Asia and Southeast Asia. In 1928, several Japanese families settled in Valle del Cauca where they came as farmers to grow crops. Between 1970 and 1980, it was estimated that there were more than 6,000 Chinese immigrants in Colombia. Their current communities are found in Bogotá, Barranquilla, Cali, Cartagena, Medellín, Santa Marta, Manizales, Cucutá and Pereira. There are also smaller Asians that immigrated to Colombia, such as Indians, Koreans, Filipinos and Pakistanis.

10.4% of Colombians are full black African or mulatto (of mixed black African and European ancestry).[20] Black Africans were brought as slaves, mostly to the coastal lowlands, beginning early in the 16th century, and continuing into the 18th century.[citation needed]

Because of its strategic location Colombia has received several immigration waves during its history. Most of these immigrants have settled in the Caribbean Coast; Barranquilla (the largest city in the Colombian Caribbean Coast) and other Caribbean cities have the largest population of Lebanese, Italian, French, and Gypsy descendants. There are also important communities of American and Chinese descendants in the Caribbean Coast. Most immigrants are Venezuelans, they are evenly distributed throughout the country.[21]

There are 101 languages listed for Colombia in the Ethnologue database, of which 80 are spoken today as living languages. There are about 500,000 speakers of indigenous languages in Colombia today.[22]

After the successful completion of all the basic and middle education years, a high-school diploma is awarded. The high-school graduate is known as a bachiller, because secondary basic school and middle education are traditionally considered together as a unit called bachillerato (sixth to eleventh grade). Students in their final year of middle education take the ICFES test (now renamed Saber 11) in order to gain access to higher education (Educación superior). This higher education includes undergraduate professional studies, technical, technological and intermediate professional education, and post-graduate studies.

Bachilleres (high-school graduates) may enter into a professional undergraduate career program offered by a university; these programs last up to five years (or less for technical, technological and intermediate professional education, and post-graduate studies), even as much to six to seven years for some careers, such as medicine. In Colombia, there is not an institution such as college; students go directly into a career program at a university or any other educational institution to obtain a professional, technical or technological title. Once graduated from the university, people are granted a (professional, technical or technological) diploma and licensed (if required) to practice the career they have chosen. For some professional career programs, students are required to take the Saber-Pro test, in their final year of undergraduate academic education.[24]

The National Administrative Department of Statistics (DANE) does not collect religious statistics, and accurate reports are difficult to obtain. However, based on various studies and a survey, about 90% of the population adheres to Christianity, the majority of which (70.9%) are Roman Catholic, while a significant minority (16.7%) adhere to Protestantism (primarily Evangelicalism)[citation needed]. Some 4.7% of the population is atheist or agnostic, while 3.5% claim to believe in God but do not follow a specific religion. 1.8% of Colombians adhere to Jehovah's Witnesses and Adventism and less than 1% adhere to other religions, such as Islam, Judaism, Buddhism, Mormonism, Hinduism, Indigenous religions, Hare Krishna movement, Rastafari movement, Orthodox Catholic Church, and spiritual studies. The remaining people either did not respond or replied that they did not know. In addition to the above statistics, 35.9% of Colombians reported that they did not practice their faith actively.[26][27][28]

While Colombia remains a mostly Roman Catholic country by baptism numbers, the 1991 Colombian constitution guarantees freedom and equality of religion.[29]