As the business practices known as corporate social responsibility (CSR) and sustainability mature and converge with the responsibilities of governments and citizens, the term "collective responsibility" is beginning to be more widely used.[2]

Collective responsibility is widely applied in corporations, where the entire workforce is held responsible for failure to achieve corporate targets (for example, profit targets), irrespective of the performance of individuals or teams which may have achieved or overachieved within their area.[3] Collective punishment, even including measures that actually further harm the prospect of achieving targets, is applied as a measure to 'teach' the workforce.

The concept of collective responsibility is present in literature, most notably in Samuel Taylor Coleridge's "The Rime of the Ancient Mariner", a poem telling the tale of a ship's crew who died of thirst after they approved of one crew member's killing of an albatross.

In some countries with parliamentary systems, there is a convention that all members of a cabinet must publicly support all government decisions, even if they do not agree with them. Members of the cabinet that wish to dissent or object publicly must resign from their position or be sacked.[5]

As a result of collective responsibility, the entire government cabinet must resign if a vote of no confidence is passed in parliament.

This concept is found in the Old Testament (or Tanakh), some examples include the account of the Flood, the Tower of Babel, Sodom and Gomorrah and in some interpretations, the Book of Joshua's Achan. In those records entire communities were punished for the acts of the vast majority of their members, however it is impossible to state that there were no innocent people, or children too young to be responsible for their deeds, on whom it was inflicted as well.

The practice of blaming the Jews for Jesus' death is the longest example of collective responsibility. In this case, the blame was cast not only on the Jews of the time but upon successive generations. This comes from Matthew 27:25-66 New International Version (NIV) 25: "All the people answered, 'His blood is on us and on our children!'" 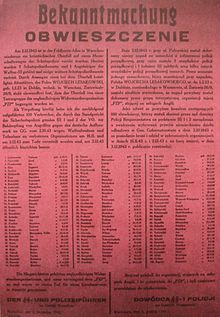 Announcement of execution of 100 Polish roundup (pol: łapanka) hostages as revenge for assassination of 5 German policemen and 1 SS man by Armia Krajowa's guerrilla fighters (referred to in the text as: a Polish "terrorist organization in British service"). Warsaw, 2 October 1943

Collective responsibility in the form of collective punishment is often used as a disciplinary measure in closed institutions, e.g. boarding schools (punishing a whole class for the actions of one known or unknown pupil), military units, prisons (juvenile and adult), psychiatric facilities, etc. The effectiveness and severity of this measure may vary greatly, but it often breeds distrust and isolation among their members. Historically, collective punishment is a sign of authoritarian tendencies in the institution or its home society.[6] For example, in the Soviet Gulags, all members of a brigada (work unit) were punished for bad performance of any of its members.[7]

Collective punishment is also practiced in the situation of war, economic sanctions, etc., presupposing the existence of collective guilt.[8] Collective guilt, or guilt by association, is the controversial collectivist idea that individuals who are identified as a member of a certain group carry the responsibility for an act or behavior that members of that group have demonstrated, even if they themselves were not involved.[9] Contemporary systems of criminal law accept the principle that guilt shall only be personal.[10] Others view groups as being entities in themselves (an entitative group), capable of holding guilt or responsibility independent of any of the group's members.[11]

Terror groups of all kinds bomb civilians who are seen as collectively responsible for the acts of their leaders. The state level bombing of civilians became popular in the Twentieth Century although ancient warriors would often slaughter whole cities if they resisted demands for capitulation or tribute.

During the occupation of Poland by Nazi Germany, the Germans applied collective responsibility: any kind of help given to a person of Jewish faith or origin was punishable by death, and that not only for the rescuer but also for his/her family.[12][13][14] This was widely publicized by the Germans.[15][16] During the occupation, for every German killed by a Pole, 100-400 Poles were shot in retribution.[17] Communities were held collectively responsible for the purported Polish counter-attacks against the invading German troops. Mass executions of łapanka hostages were conducted every single day during the Wehrmacht advance across Poland in September 1939 and thereafter.[18]

Another example is when after the war, ethnic Germans in Central and Eastern Europe were held collectively responsible for Nazi crimes, resulting in numerous atrocities against the German population, including killings (see Expulsion of Germans after World War II and Beneš decrees).[19]

Normally, only the individual actor can accrue culpability for actions that they freely cause. The notion of collective culpability seems to deny individual moral responsibility. Does collective responsibility make sense? History is filled with examples of a wronged man who tried to avenge himself, not only on the person who has wronged him, but on other members of the wrongdoer's family, tribe, ethnic group, religion, or nation.[21]