Coleraine (/koʊlˈreɪn/; from Irish Cúil Rathain, meaning 'nook of the ferns'[2] [kuːlʲ ˈɾˠahɪnʲ]) is a town and civil parish near the mouth of the River Bann in County Londonderry, Northern Ireland. It is 55 miles (88.5 km) northwest of Belfast and 30 miles (48.3 km) east of Derry, both of which are linked by major roads and railway connections. It is part of Causeway Coast and Glens district.

Coleraine had a population of 24,634 people in the 2011 Census.[1] Disposable income is well above the Northern Ireland average. The North Coast (Coleraine and Limavady) area has the highest property prices in Northern Ireland, higher even than those of affluent South Belfast.[3] Golf courses, countryside and leisure facilities and attractions are to be found. It also contains a marina. Coleraine during the day is a busy town, however, at night the town is relatively quiet, with much of the nightlife in the area located in the nearby seaside towns of Portrush and Portstewart. Coleraine is also home to one of the largest Polish communities in Northern Ireland.

Coleraine is situated at the lowest bridgeable point of the River Bann, where the river is 90 metres wide. The town square is called 'The Diamond' and is the location of the Town Hall. St. Patrick's Church of Ireland is situated nearby. The University of Ulster campus was built in the 1960s and has brought a theatrical space to the town in the form of the Riverside Theatre. 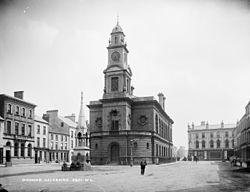 Coleraine has a long history of settlement. The Mesolithic site at Mount Sandel, which dates from approximately 5935 BC[4] is some of the earliest evidence of human settlement in Ireland.[5]

The 9th-century Hagiography Tripartite Life of Saint Patrick records how the town got its name. When Patrick arrived in the neighbourhood, he was received with great honour and hospitality by the local chieftain, Nadslua, who offered him a piece of ground on which to build a church. The spot was next to the river Bann and was overgrown with ferns, which were being burned by some boys to amuse themselves. This incident led to the area being called Cúil Raithin ("nook of ferns"), which was later anglicised as Colrain, Colerain and Coleraine. It was translated by Colgan into Latin as Secessus Filicis.

The town was one of the two urban communities developed by the London Companies in County Londonderry in the Plantation of Ulster at the start of the 17th century. The slightly skewed street pattern of Coleraine's town centre is legacy of that early exercise in town planning, along with traces of the lines of the ramparts that provided the Plantation town with its defences. In 1637 the Surveyor General of Customs issued a report compiled from accounts of customs due from each port and their "subsidiary creeks". Of the Ulster ports on the list, Carrickfergus was first, followed by Bangor, Donaghadee, and Strangford. Carlingford and Coleraine each had £244 customs due and had equal ranking.[6]

During the War of the Two Kings (1689–91) Coleraine was a centre of Protestant resistance to the rule of James II. Richard Hamilton's Irish Army made an attempt to seize the town but was repulsed. The Protestants were forced to abandon the town shortly afterwards and withdrew to Derry. Later the same year, following the failed Siege of Derry, Sir Charles Carney and his Jacobite garrison fled the town on receiving news of the advance of Percy Kirke's Enniskillen forces and the landing at Carrickfergus of Marshal Schomberg. The Williamites controlled Coleraine for the remainder of the war.

With some industrialisation, the expansion of the river port, and the development of the railway, the town expanded significantly throughout the 19th century and into the early part of the 20th century, especially after the Second World War. The population doubled due to a number of factors: major industrial development on extensive suburban sites; the decision to site the New University of Ulster (now known as the Ulster University) in the town; the expansion of commerce; and the development of sporting and recreational facilities. There has been a steady expansion of the urban area from the mid 20th-century compact town of less than 2.25 sq mi (5.8 km2), to the present much more dispersed area of about 7 sq mi (18 km2). During the Northern Irish Troubles 13 people were killed in or near Coleraine, ten of them in two separate car bomb explosions.

Main article: The Troubles in Coleraine

The poem The Coleraine Salmon Leap of 1835 by Letitia Elizabeth Landon refers to an abundance of salmon in the river here in those times, and to a considerable sport derived therefrom. 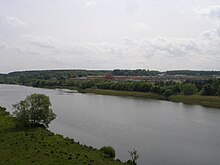 The Borough Council area together with the neighbouring district of Limavady, forms the East Londonderry constituency for elections to the Westminster Parliament and Northern Ireland Assembly, despite some of the borough being in County Antrim.

Coleraine is close to the Causeway Coast tourist route, which attracts over three million visitors per year, spending in excess of £47 million.[8] A UNESCO World Heritage Site, the Giant's Causeway, is a twenty–five-minute bus ride away. The distillery village of Bushmills is served by buses from the town and there is a narrow-gauge steam train running in the summer from Bushmills to the Giant's Causeway. Also north of Coleraine is the scenic coastal town of Portstewart, with a sandy beach and coastal walks. Portrush is part of the Borough.

North-west of Coleraine lies the small village of Castlerock, with a beach which is essentially a continuation of the beach at Portstewart, separated by the River Bann. Also nearby is the beach at Benone Strand and Mussenden Temple, built by Frederick Augustus Hervey, an 18th-century Anglican bishop atop a precipitate cliff and overlooking County Donegal in one direction and Scotland in another. The National Trust managed Downhill forest was part of the Bishop's Palace, and although the Palace itself is now a ruin, the gardens contain a number of hidden lakes and flower gardens.[citation needed]

Coleraine experiences a maritime climate with cool summers and relatively mild winters. The nearest official Met Office weather station for which online records are available is at nearby Coleraine University,[9] about 1 mile North of the town centre. However, observations ceased a few years ago and the nearest current Met Office weather observing station is at Movanagher, about 12 miles to the south. Rainfall at Coleraine typically peaks at over 100mm during the month of October. The driest month is May, with an average of under 60mm.[10] On average, 173 days of the year will report at least 1mm of rain, ranging from 18 days in January to 11 days during June. The following table summarises temperature averages sampled between 1971 and 2000.

The east side of the town is distinguished by Mountsandel Forest, which contains the Mount Sandel fort, an ancient site which has been claimed as the oldest site of human settlement in Ireland. Here wooden houses dating from about 7000 BC were uncovered.[12][13] The fort can be accessed via Mountsandel forest, the closest entrance being the side near the Coleraine Courthouse. There is another fort about 2 miles south from Mountsandel one near a small village called the Loughan.

Coleraine has a variety of educational institutions at all levels.

The local schools include:

Coleraine is the location of a University of Ulster campus and houses the university's administration buildings. It is the original campus of what was the New University of Ulster (established in 1968) which merged with the former Ulster Polytechnic at Jordanstown just north of Belfast in 1984 to form the present-day institution. In the 2014 Research Excellence Framework, it was ranked in the top five universities in the UK for its research in law, biomedical sciences, nursing, and art and design.[14] The Causeway Institute is a College of Further and Higher Education based in Coleraine, with another campus in nearby Ballymoney.

The railway station was closed for goods traffic on 4 January 1965.[15]

Coleraine Bowling Club is a lawn bowls club situated on the Lodge Road and was founded in 1903. Coleraine are one of the most successful teams in the NIPBA and Irish bowling, with 64 titles on the honours list. The Bannsiders have claimed two Irish Bowling Association Senior Challenge Cup victories, in 1921 and 2013. Coleraine have also provided a number of international players and Commonwealth Games representatives, most notably Victor Dallas and Roy Fulton.

Within the local area, but not within Coleraine, are a number of well-known golf courses including Castlerock Golf Club, Royal Portrush Golf Club and Portstewart Golf Club.

Coleraine has a significant equestrian fraternity, with a number of clubs in the vicinity – of particular interest is RDA Coleraine (Riding for the Disabled Association (Coleraine & District Group), which provides riding opportunities for persons with a physical and/or learning disability at their £1.75 million RDA Causeway Coast Arena at Castleroe (see website www.rdacoleraine.org). The new arena was funded by SportNI, Coleraine Borough Council, and by donations from the people of the district. The conditions of grant aid included the provision of a first-class sporting arena for RDA, the equestrian fraternity, and other sporting activities. Especially important is the development of The OWLS Sports Club (Opportunities Without Limits), which will co-ordinate the development of a range of different sporting opportunities for persons with physical and/or learning disabilities, and in many cases their siblings. To facilitate this process SportNI has funded the provision of a Sports Development Officer.

Colerain Township, Ohio was laid out in northwest Hamiton County in 1790, by John Dunlap of Coleraine, Ireland. It became township in 1974 and is the second-largest township in Ohio with a population in excess of 60,000 people in an area of 43 sq miles.

Coleraine, as a town name, exists in other countries, for example, Coleraine in Minnesota, United States. In 1853, a surveyor named Lindsay Clarke was working on a township called Bryans Creek Crossing in Victoria, Australia. He renamed the town Coleraine.[17]

A wine from New Zealand, Te Mata Estate's Coleraine Cabernet/Merlot, is named after the town.[18]

The Zomba Action Project is a charity founded in 2003 under the guidance of Coleraine Borough Council to aid the municipality of Zomba in southern Malawi, which aims to help some of the citizens of that region to build a better life for themselves and their children. The region was chosen due to the historical connections between the Presbyterian and Catholic churches and Malawi, sustained by a number of specific local contacts. Donations have been used to fund computers, education, medical and other projects.[19]

A street in the Pointe-Saint-Charles neighbourhood of Montreal, Canada is named Coleraine, which once was an Irish neighbourhood.

Saint-Joseph-de-Coleraine, a small municipality in the Appalachian Mountains region of the province of Quebec, Canada, is named after Saint Joseph, father of Jesus, and, the town of Coleraine in County Londonderry, Northern Ireland. It is part of the "Chaudière-Appalaches" region and the population is 2,018 as of 2009. It holds an Irish Heritage Festival annually.