A more precise definition is given by the Köppen climate classification, which treats steppe climates (BSk and BSh) as intermediates between desert climates (BW) and humid climates in ecological characteristics and agricultural potential. Semi-arid climates tend to support short or scrubby vegetation and are usually dominated by either grasses or shrubs. 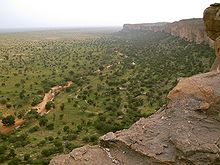 If the area's annual precipitation in millimeters is less than the threshold but more than half the threshold, it is classified as a BS (steppe climate).[1] 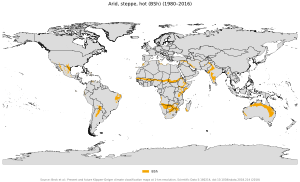 Hot semi-arid climates (type "BSh") tend to be located in the 20s and 30s latitudes of the (tropics and subtropics), typically in proximity to regions with a tropical savanna or a humid subtropical climate. These climates tend to have hot, sometimes extremely hot, summers and warm to cool winters, with some to minimal precipitation. Hot semi-arid climates are most commonly found around the fringes of subtropical deserts.

Hot semi-arid climates are most commonly found in Africa, Australia and South Asia. In Australia, a large portion of the Outback surrounding the central desert regions lies within the hot semi-arid climate region.[2][clarification needed] In South Asia, both India and sections of Pakistan experiences the seasonal effects of monsoons and feature short but well-defined wet seasons, but is not sufficiently wet overall to qualify as a tropical savanna climate.

Hot semi-arid climates can also be found in Europe (primarily in Southeast Spain[3][4]) and small parts of Italy, Portugal, Greece, and Cyprus. Also in parts of North America, such as in Mexico, and areas of the Southwestern United States, and sections of South America such as the sertão, the Gran Chaco, and on the poleward side of the arid deserts, where they typically feature a Mediterranean precipitation pattern, with generally rainless summers and wetter winters.

Cold semi-arid climates are most commonly found in Asia and North America. However, they can also be found in Northern Africa, South Africa, Europe, sections of South America and sections of interior southern Australia and New Zealand.

In climate classification, three isotherms means that delineate between hot and cold semi-arid climates — the 18 °C average annual temperature or that of the coldest month (0 °C or −3 °C), the warm side of the isotherm of choice defining a BSh climate from the BSk on the cooler side. As a result of this, some areas can have climates that are classified as hot or cold semi-arid depending on the isotherm used. One such location is San Diego, California (at its main airport), which has cool summers for the latitude due to prevailing winds off the ocean (so the average annual temperature is below 18 °C) but mild winters (average temperature in January, 14 °C, and closer to the 18.0 °C isotherm that separates tropical and subtropical climates than to the 0 °C or −3 °C isotherm for the coldest month that separates temperate and continental climates).