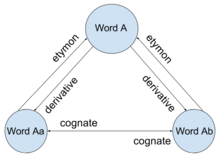 In linguistics, cognates are words that have a common etymological origin.[1] Cognates are often inherited from a shared parent language, but they may also involve borrowings from some other language. For example, the English words dish and desk and the German word Tisch ("table") are cognates because they all come from Latin discus, which relates to their flat surfaces. Cognates may have evolved similar, different or even opposite meanings, but in most cases there are some similar sounds or letters in the words, in some cases appearing to be dissimilar. Some words sound similar, but do not come from the same root; these are called false cognates, while some are truly cognate but differ in meaning; these are called false friends.

The word cognate derives from the Latin noun cognatus, which means "blood relative".[2]

Cognates do not need to have the same meaning, which may have changed as the languages developed separately. For example English starve and Dutch sterven or German sterben ("to die") all derive from the same Proto-Germanic root, *sterbaną ("die"). Discus is from Greek δίσκος (from the verb δικεῖν "to throw"). A later and separate English reflex of discus, probably through medieval Latin desca, is desk (see OED s.v. desk).

The Arabic سلام salām, the Hebrew שלום‎ shalom, the Assyrian Neo-Aramaic shlama and the Amharic selam ("peace") are also cognates, derived from the Proto-Semitic *šalām- "peace".

Cognates may often be less easily recognised than the above examples, and authorities sometimes differ in their interpretations of the evidence. The English word milk is clearly a cognate of German Milch, Dutch melk, Russian молоко (moloko), Serbian and Slovenian mleko, and Montenegrin, Bosnian, Croatian, mlijeko.[3] On the other hand, French lait, Catalan llet, Italian latte, Romanian lapte, Spanish leche and leite (Portuguese and Galician) (all meaning "milk") are less-obvious cognates of Ancient Greek γάλακτος gálaktos (genitive singular of γάλα gála, "milk"), a relationship that is more evidently seen through the intermediate Latin lac "milk" as well as the English word lactic and other terms borrowed from Latin.

Within the same language

Cognates within a single language, or doublets, may have meanings that are slightly or even totally different. For example, English ward and guard (<PIE *wer-, "to perceive, watch out for") are cognates, as are shirt (garment on top) and skirt (garment on bottom) (<PIE *sker-, "to cut"). In some cases, including this one, one cognate ("skirt") has an ultimate source in another language related to English,[5] but the other one ("shirt") is native.[6] That happened with many loanwords, such as skirt in this example, which was borrowed from Old Norse during the Danelaw.

Sometimes both doublets come from other languages, often the same one but at different times. For example, the word chief (meaning the leader of any group) comes from the Middle French chef ("head"), and its modern pronunciation preserves the Middle French consonant sound; the word chef (the leader of the cooks) was borrowed from the same source centuries later, but by then, the consonant had changed to a "sh" sound in French. Such word sets can also be called etymological twins, and they may come in groups of higher numbers, as with, for example, the words wain (native), waggon/wagon (Dutch), and vehicle (Latin) in English.

A word may also enter another language, develop a new form or meaning there, and be re-borrowed into the original language; that is called reborrowing. For example, the Greek word κίνημα (kinima, "movement") became French cinéma (compare American English movie) and then later returned to Greece as σινεμά (sinema, "the art of film", "movie theater"). In Greek, κίνημα (kinima, "movement") and σινεμά (sinema, "filmmaking, cinema") are now doublets.[7]

A less obvious English-language doublet pair is grammar and glamour.

False cognates are words that people commonly believe are related (have a common origin), but that linguistic examination reveals are unrelated. For example, on the basis of superficial similarities, the Latin verb habēre and German haben, both meaning 'to have', appear to be cognates. However, because the words evolved from different roots, in this case, different Proto-Indo-European (PIE) roots, they cannot be cognate (see for example Grimm's law). German haben, like English have, comes from PIE *kh₂pyé- 'to grasp', and its real cognate in Latin is capere, 'to seize, grasp, capture'. Latin habēre, on the other hand, is from PIE *gʰabʰ, 'to give, to receive', and hence cognate with English give and German geben.[8]

Likewise, English much and Spanish mucho look similar and have a similar meaning but are not cognates, as they evolved from different roots: much from Proto-Germanic *mikilaz < PIE *meǵ- and mucho from Latin multum < PIE *mel-. Instead, its real cognate is Spanish maño.[9]