Cocaine in the United States 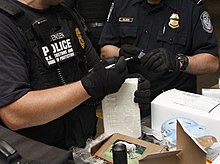 Cocaine is the second most popular illegal recreational drug in the United States behind marijuana,[1] and the U.S. is the world's largest consumer of cocaine.[2]

Calls for prohibition began long before the Harrison Narcotics Tax Act was passed by Congress in 1914 – a law requiring cocaine and narcotics to be dispensed only with a doctor's order.[3] Before this, various factors and groups acted on primarily at the state level influencing a move towards prohibition and away from a laissez-faire attitude.[4] Cocaine consumption had grown in 1903 to about five times that of 1890, predominately by non-medical users outside the middle-aged, American, professional class. Cocaine became associated with laborers, youths, black people, and the urban underworld.[5]

Popularization of cocaine is first evident with laborers who used it as a stimulant to increase productivity,[5] often supplied by employers.[6] African American workers were believed by employers to be better at physical work and it was thought that it provided added strength to their constitution which, according to the Medical News, made black people "impervious to the extremes of heat and cold".[5] Instead, cocaine use quickly acquired a reputation as dangerous and in 1897, the first state bill of control for cocaine sales came from a mining county in Colorado.[7] Laborers from other races used cocaine, such as in northern cities, where cocaine was often cheaper than alcohol.[6] In the Northeast in particular, cocaine became popular amongst workers in factories, textile mills, and on railroads.[8] In some instances, cocaine use supplemented or replaced caffeine as the drug of choice to keep workers awake and working overtime.[8]

Fears of coerced cocaine use, and in particular that young girls would become addicted and thereby enter prostitution, were widespread.[9][10] Tales of the corruption of the youth by cocaine were common but there is little evidence to support their veracity.[9] Mainstream media reported cocaine epidemics as early as 1894 in Dallas, Texas. Reports of the cocaine epidemic would foreshadow a familiar theme in later so-called epidemics, namely that cocaine presented a social threat more dangerous than simple health effects and had insidious results when used by blacks and members of the lower class. Similar anxiety-ridden reports appeared throughout cities in the South, leading some to declare that "the cocaine habit has assumed the proportions of an epidemic among the colored people". In 1900, state legislatures in Alabama, Georgia, and Tennessee considered anti-cocaine bills for the first time.[11]

Hyperbolic reports of the effect of cocaine on African Americans went hand-in-hand with this hysteria. In 1901, the Atlanta Constitution reported that "Use of the drug [cocaine] among negroes is growing to an alarming extent".[12] The New York Times reported that under the influence of cocaine, "sexual desires are increased and perverted...peaceful negroes become quarrelsome, and timid negroes develop a degree of 'Dutch courage' that is sometimes almost incredible".[13] A medical doctor even wrote “cocaine is often the direct incentive to the crime of rape by the negroes.”[13] To complete the characterization, a judge in Mississippi declared that supplying a “negro” with cocaine was more dangerous than injecting a dog with rabies.[14]

These attitudes not only influenced drug law and policy but also led to increased violence against African Americans. In 1906, a major race riot led by whites erupted; it was sparked by reports of crimes committed by black "cocaine fiends".[12] Indeed, white-led race riots spawning from reports of black people under the influence of cocaine were not uncommon.[15] Police in the South widely adopted the use of a heavier caliber handguns so as to better stop a cocaine-crazed black person – believed to be empowered with super-human strength.[16] Another dangerous myth perpetuated amongst police was that cocaine imbued African Americans with tremendous accuracy with firearms and therefore police were better advised to shoot first in questionable circumstances.[17] Ultimately public opinion rested against the cocaine user. Criminality was commonly believed to be a natural result of cocaine use.[18] Much of the influence for these kind of perceptions came from the widespread publicity given to notorious cases.[4] While the historical reality of cocaine’s effect on violence and crime is difficult to disentangle from inflamed perceptions, it does appear that public opinion was swayed by the image of the violent, cocaine-crazed fiend and pushed over the edge by a few violent episodes.[18] It was an image of the cocaine-user that carried acute racial overtones.[4]

Before any substantive federal regulation of cocaine, state and local municipalities evoked their own means to regulate cocaine. Because of the initial lack of targeted legislation, on both federal and state level, the most typical strategy by law enforcement was the application of nuisance laws pertaining to vagrancy and disturbing the peace.[19] Subsequent legislative actions aimed at controlling the distribution of cocaine rather than its manufacture.[20] Reformers took this approach in part because of legal precedents which made it easier to control distributors such as pharmacies; state and local boards of health or boards of pharmacy often took the place of regulatory bodies for controlling the distribution of cocaine.[20] Some states took the position of outright banning of all forms of cocaine sale; Georgia was the first to do this in 1902.[21] A New Orleans ordinance banned cocaine sales as well but left an ill-defined exception for therapeutic uses.[20] A more common requirement was to restrict the sale of cocaine or impose labeling requirements. A 1907 California law limiting sale of cocaine to only those with a physician’s prescription resulted in the arrest of over 50 store owners and clerks in the first year.[20] A 1913 New York state law limited druggists’ cocaine stocks to under 5 ounces. Labeling requirements initially operated on a state level with some states even going so far as to require that cocaine and cocaine-containing products be labeled as poison.[22]

Eventually the federal government stepped in and instituted a national labeling requirement for cocaine and cocaine-containing products through the Food and Drug Act of 1906.[22] The next important federal regulation was the Harrison Narcotics Tax Act of 1914. While this act is often seen as the start of prohibition, the act itself was not actually a prohibition on cocaine, but instead set up a regulatory and licensing regime.[3] The Harrison Act did not recognize addiction as a treatable condition and therefore the therapeutic use of cocaine, heroin, or morphine to such individuals was outlawed – leading the Journal of American Medicine to remark that an addict "is denied the medical care he urgently needs, open, above-board sources from which he formerly obtained his drug supply are closed to him, and he is driven to the underworld where he can get his drug, but of course, surreptitiously and in violation of the law".[23] The Harrison Act left manufacturers of cocaine untouched so long as they met certain purity and labeling standards.[24] Despite that cocaine was typically illegal to sell and legal outlets were more rare, the quantities of legal cocaine produced declined very little.[24] Legal cocaine quantities did not decrease until the Jones-Miller Act of 1922 put serious restrictions on cocaine manufactures.[24]

The popularity of cocaine faded in the 1950s and by the late 1950s many considered the drug to be a problem of the past. Cocaine became popular in America again in the 1960s, undergoing a re-emergence of kind.[25]

In the 1970s and 1980s, the drug became particularly popular in the disco culture as cocaine usage was very common and popular in many discos such as Studio 54, even spawning open publications such as Adam Gottlieb's 1976 book The Pleasures of Cocaine which appealed to the collective experience of prohibition to call for legalization:

The path of cocaine as it stands in the streets of and north America today offers dangers not only inherent in the pharmacology of the alkaloid itself, but also in the bizarre assortment of adulterants which are added to it by black market middlemen. This is what happens when a popular substance is made illegal. We have lived this nightmare before and still have not learned.

The National Household Survey on Drug Abuse (NHSDA) reported that in the United States in 1999 that cocaine was used by 3.7 million people, or 1.7% of the household population age 12 and older. Estimates of the current number of those who use cocaine regularly (at least once per month) vary, but 1.5 million is a widely accepted figure within the research community. In 2001, more Hispanics received sentences for crimes relating to powder cocaine than any other ethnicity while more African Americans were convicted of crimes relating to crack cocaine in the United States.

Although cocaine use had not significantly changed over the six years prior to 1999, the number of first-time users went up from 574,000 in 1991, to 934,000 in 1998 – an increase of 63%. While these numbers indicated that cocaine is still widely present in the United States, its use was significantly less prevalent than during the early 1980s.

The 1999 Monitoring the Future (MTF) survey found the proportion of American students reporting use of powdered cocaine rose during the 1990s. In 1991, 2.3% of eighth-graders stated that they had used cocaine in their lifetime. This figure rose to 4.7% in 1999. For the older grades, increases began in 1992 and continued through the beginning of 1999. Between those years, lifetime use of cocaine went from 3.3% to 7.7% for tenth-graders and from 6.1% to 9.8% for high-school seniors. Lifetime use of crack cocaine, according to MTF, also increased among eighth-, tenth-, and twelfth-graders, from an average of 2% in 1991 to 3.9% in 1999.