The maple leaves in the shield, blazoned "proper", were originally drawn vert (green) but were redrawn gules (red) in 1957 and a circlet of the Order of Canada was added to the arms for limited use in 1987. The shield design forms the monarch's royal standard and is also found on the Canadian Red Ensign. The Flag of the Governor General of Canada, which formerly used the shield over the Union Flag, now uses the crest of the arms on a blue field.

The arms are embossed on the covers of Canadian passports, in order to legally signify and symbolize that the bearer is travelling under the aid of the Crown of Canada. 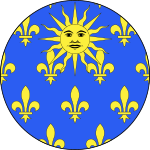 Blason proposed for the French province of Canada in 1663

Prior to Confederation in 1867, the Royal Arms of the United Kingdom served in Canada as the symbol of royal authority.[16] Arms had not been granted to any of the colonies in British North America, apart from 17th-century grants to Nova Scotia[17] and Newfoundland.[18][19] The year after Confederation, arms were granted by Royal Warrant on 26 May 1868 to Ontario,[20] Quebec,[21] Nova Scotia[22] (that Nova Scotia had been granted arms was forgotten, and it took until 1929 for the historic arms granted in the 17th century to be reinstated)[17] and New Brunswick.[23] In the Royal Warrant of 1868, Queen Victoria authorized the four arms of the first provinces to be quartered for use on the Great Seal of Canada and while this was not done for the first Great Seal, it is through this reference it became the de facto arms for Canada until 1921.[24] That is why it was in this form Canada was represented on the first Red Ensign carried by Canadian troops at Vimy Ridge in 1917.

A shield of arms first quartered and then, over time, as more provinces and territories joined Canada, marshalled with the arms of the new members of Confederation emerged through popular and even Canadian governmental usage. This eventually resulted in a shield with nine quarterings, an arrangement that had never been approved by the monarch.[16]

Nine quarterings on a shield was considered too complex[16] for a national symbol and by 1915 a push had begun to design a new coat of arms for Canada.[25] A committee was formed in 1919 to pursue the issue, eventually agreeing that the elements of the new arms would reference the Royal Arms of England, Ireland, Scotland, and France, with maple leaves representing Canada, though there was at the time no consensus on how the leaves were to be used.[25] The decision was settled by 1920, and the committee conferred with the College of Arms in London, only to face resistance to the use of the Royal Arms from the Garter King of Arms.[25] After some manoeuvring, including the personal intervention of Winston Churchill, the new arms of Canada were eventually formally requested by an Order in Council on 30 April 1921 and adopted on 21 November of the same year by proclamation of King George V as the Arms or Ensigns Armorial of the Dominion of Canada.[26][27] The new layout closely reflected the arms of the United Kingdom[28] with the addition of maple leaves in the base and the reference to the French royal arms in the fourth quarter.[29] The proclamation also established white and red as the national colours of Canada.

In 1931, with the passage of the Statute of Westminster, Canada and other Dominions became fully sovereign from the United Kingdom. This had the effect of elevating the Canadian coat of arms, which had been granted as deputed arms for particular uses in a colony, to the status of the royal arms of the King in right of the country, for general purposes throughout the country. They thus replaced the British coat of arms, which had previously been arms of general purpose throughout the British Empire, in court rooms and on government buildings to represent the ruling monarch. This change can be seen in the Great Seal of Canada of George VI, where the royal arms of Canada replaced the British arms, and is even more evident in the Great Seal of Canada for Elizabeth II, where the title has been redefined as Queen of Canada.[30] These are the coat of arms of the Queen of Canada.

By 1957, the arms were redrawn by Alan Beddoe so as to have red leaves and to change the royal crown from one of a Tudor design to one more resembling St. Edward's Crown, as preferred by Queen Elizabeth II.[16] To mark the 1982 patriation of the Canadian constitution, which finally ended the last vestiges of British authority over Canada, a McGill University student named Bruce Hicks proposed to Secretary of State Gerald Regan that the motto of the Order of Canada be placed around the shield in order to bring these royal arms into line with other royal arms, many of which have been displayed in Canada during French, Scottish, and English colonisation, where those countries' highest national order of honour appears around the shield of the arms (the British arms displayed the Order of the Garter, the Scottish royal arms the Order of the Thistle, and the royalist arms of the French Regime the Order of the Holy Spirit and Order of Saint Michael).[31] While unsuccessful in this first attempt, Hicks continued his campaign and was joined by a number of other amateur and professional heraldists. As a journalist in the parliamentary press gallery in Ottawa in the late 1980s and early 90s, Hicks strategically recast the change as something worth doing to commemorate the 25th Anniversary of the Order of Canada in 1992, an idea that was endorsed by the Advisory Committee on the Order of Canada.[32]

It took until 1994 for the Queen to approve the new design for general use, though the Canadian Heraldic Authority began to allow for its limited use beginning in 1987, where the arms were used to represent the Queen personally on letters patent granting new arms for distinguished Canadians.[4] These letters patent carried the shield from the royal arms along with the annulus behind the shield bearing the motto of the Order of Canada—Desiderantes meliorem patriam. As soon as royal approval was forthcoming, the full achievement was redesigned for use by the federal government within the Federal Identity Program.[16] The present design of the arms of Canada was drawn by Cathy Bursey-Sabourin, Fraser Herald at the Canadian Heraldic Authority.[33]

In June 2008, Member of Parliament Pat Martin introduced a motion into the House of Commons of Canada calling on the government to amend the coat of arms to incorporate symbols representing Canada's First Nations, Inuit, and Métis peoples.[34] 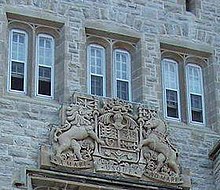 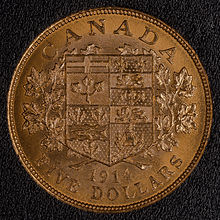 The arms of Canada are the arms of the sovereign and signify national sovereignty and ownership.[35] They are used as a mark of authority by various government agencies and representatives, including the prime minister[36] and Cabinet,[37] and most courts, including the Supreme Court,[38] as well as the Canadian Armed Forces and Royal Canadian Mounted Police.[39][40][41] It is also present on all pre-polymer denominations of Canadian banknotes (in fact, the way the arms were printed on each bill is a security feature),[42] as well as the 50¢ coin,[43] and on the cover of Canadian passports.[44] Since 1962, a banner of the arms, defaced with a variant of the Queen's cypher, has formed the sovereign's standard for Canada, for use by the Queen in her capacity as monarch of Canada.[45] Since, six additional standards for use by other members of the Canadian Royal Family have been created.

In the Canadian Armed Forces and Royal Canadian Mounted Police, the most senior non-commissioned ranks wear the 1957 version of the coat of arms as a badge of rank, representing the fact that they have received the Queen's warrant (as opposed |to the Queen's commission for officers). The revised 1957 and 1994 Arms of Canada are both protected official government symbols used to represent the state under the Federal Identity Program.[46] Permanent resident cards issued from 2015 feature a holographic representation of the 1957 version of the coat of arms.[47]

The full achievement of the coat of arms has been used by the Canadian government on occasion on a plain red flag, such as in 1967 for the country's centennial celebrations.[48]

It is also used on a flag in its full achievement in military ceremonies, such as Canadian Armed Forces Tattoo performances.[49]

The personal flag of the Governor General has, since 1981, featured the crest of the royal arms of Canada on a blue background.[50][51]

In response to a new campaign by Bruce Hicks for the Canadian Parliament to have a distinct heraldic symbols along the lines of the portcullis (variations of which are used by the Commons and Lords in the British Parliament),[52] a proposal that was supported by Speakers of the House of Commons John Fraser and Gilbert Parent, a Commons committee was eventually struck following a motion by MP Derek Lee, before which Hicks and Robert Watt, the first Chief Herald of Canada, were called as the only two expert witnesses, though Senator Serge Joyal joined the committee ex-officio on behalf of the Senate. Commons' Speaker[53] Peter Milliken then asked the Canadian Heraldic Authority to authorize such a symbol and, on 15 February 2008, the Governor General authorized the House of Commons to begin using a badge of the shield of the royal arms superimposed on the ceremonial mace assigned to the House of Commons as a symbol of the royal authority under which it operates.[54][55] Following the Commons example, the Senate then requested and obtained on 15 April 2008 a similar badge for itself with the shield of the royal arms surmounted on the mace assigned to the Senate.[56]

The heraldic blazon of Canada's coat of arms, as declared in the 1921 proclamation, is:

Tierced in fesse the first and second divisions containing the quarterly coat following, namely, 1st, gules three lions passant guardant in pale Or, 2nd, Or a lion rampant within a double tressure flory-counter-flory gules, 3rd, azure a harp Or stringed argent, 4th, azure, three fleurs-de-lis Or, and the third division argent three maple leaves conjoined on one stem proper. And upon a royal helmet mantled argent doubled gules the crest, that is to say, on a wreath of the colours argent and gules a lion passant guardant Or imperially crowned proper and holding in the dexter paw a maple leaf gules. And for supporters on the dexter a lion rampant Or holding a lance argent, point Or, flying therefrom to the dexter the Union Flag, and on the sinister a unicorn argent armed crined and unguled Or, gorged with a coronet composed of crosses-patée and fleurs-de-lis a chain affixed thereto reflexed of the last, and holding a like lance flying therefrom to the sinister a banner azure charged with three fleurs-de-lis Or; the whole ensigned with the Imperial Crown proper and below the shield upon a wreath composed of roses, thistles, shamrocks and lillies a scroll azure inscribed with the motto A mari usque ad mare.[26][27]

The circlet of the Order of Canada was added around the shield for limited use in 1987, and for general use in 1994.[4]

As the Royal Arms are personal to the sovereign they cannot be used without consent.[69] The coat of arms "as designed in 1921 and revised in 1957...(and) in 1994" are "protected under the Trade-marks Act and the Copyright Act and cannot be used or reproduced without authorization".[46] Further, "Marks and designs similar to the official symbols are pursued as a copyright or trade-mark infringement".[46] The Trade-marks Act further states that "No person shall adopt in connection with a business, as a trade-mark or otherwise, any mark consisting of, or so nearly resembling as to be likely to be mistaken for... the arms, crest or flag adopted and used at any time by Canada".[70] In addition, under Crown copyright, "permission is always required when the work is being revised, adapted, or translated regardless if the purpose of the reproduction is for personal or public non-commercial distribution".[71]