The Co-operative Commonwealth Federation (CCF) (French: Fédération du Commonwealth Coopératif, from 1955 the Parti social démocratique du Canada) was a social-democratic[3] and democratic socialist[4] political party in Canada. The CCF was founded in 1932 in Calgary, Alberta, by a number of socialist, agrarian, co-operative, and labour groups,[5] and the League for Social Reconstruction. In 1944, the CCF formed the first social-democratic government in North America when it was elected to form the provincial government in Saskatchewan.[6] In 1961, the CCF was succeeded by the New Democratic Party (NDP). The full, but little used, name of the party was Co-operative Commonwealth Federation (Farmer-Labour-Socialist).[7]

The CCF aimed to alleviate the suffering that workers and farmers, the ill and the old endure under capitalism, seen most starkly during the Great Depression, through the creation of a Co-operative Commonwealth, which would entail economic co-operation, public ownership of the economy, and political reform.

The object of the political party as reported at its founding meeting in Calgary in 1932 was "the federation [joining together] of organizations whose purpose is the establishment in Canada of a co-operative commonwealth, in which the basic principle of regulating production, distribution and exchange will be the supplying of human needs instead of the making of profit."[7]

The goal of the CCF was defined as a "community freed from the domination of irresponsible financial and economic power in which all social means of production and distribution, including land, are socially owned and controlled either by voluntarily organized groups of producers and consumers or – in the case of major public services and utilities and such productive and distributive enterprises as can be conducted most efficiently when owned in common – by public corporations responsible to the people's elected representatives".[8] Many of the party's first Members of Parliament (MPs) were members of the Ginger Group, composed of United Farmers of Alberta, left-wing Progressive, and Labour MPs. These MPs included United Farmers of Alberta MPs William Irvine and Ted Garland, Agnes Macphail (UFO), Humphrey Mitchell, Abraham Albert Heaps, Angus MacInnis, and Labour Party MP J. S. Woodsworth. Also involved in founding the new party were members of the League for Social Reconstruction (LSR), such as F. R. Scott and Frank Underhill.[9]:31 It can be said that the CCF was founded on May 26, 1932, when the Ginger Group MPs and LSR members met in William Irvine's office, the unofficial caucus meeting room for the Ginger Group, and went about forming the basis of the new party.[10] J. S. Woodsworth was unanimously appointed the temporary leader until they could hold a founding convention.[11] The temporary name for the new party was the Commonwealth Party.[9]:30

At its founding convention in 1932 in Calgary, the party settled on the name "Co-operative Commonwealth Federation (Farmer-Labour-Socialist)" and selected J. S. Woodsworth as party leader.[12] Woodsworth had been an Independent Labour Party MP since 1921 and a member of the Ginger Group of MPs. The party's 1933 convention, held in Regina, Saskatchewan, adopted the Regina Manifesto as the party's program. The manifesto outlined a number of goals, including public ownership of key industries, universal public pensions, universal health care, children's allowances, unemployment insurance, and workers' compensation.[9]:304–313

Its conclusion read, "No CCF Government will rest content until it has eradicated capitalism and put into operation the full programme of socialized planning which will lead to the establishment in Canada of the Co-operative Commonwealth."[12] The party affiliated to the Socialist International.[13] 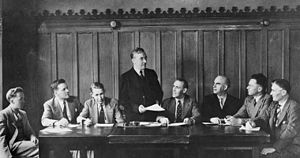 In line with Alberta's important role in founding the CCF, it is said that the first CCF candidate elected was Chester Ronning in the Alberta provincial constituency of Camrose, in October 1932.[15] The UFA, under whose banner he contested the election, formalized its already-strong connection to the CCF in its next provincial convention, in January 1933.[16]

In its first federal election, seven CCF MPs were elected to the House of Commons in 1935. Eight were elected in the following election in 1940, including their first member east of Manitoba, Clarence Gillis, in Cape Breton, a coal-mining area of Nova Scotia (specifically the federal riding of Cape Breton South. The party was divided with the outbreak of World War II: Woodsworth was a pacifist, while many party members supported the Canadian war effort. Woodsworth had a physically debilitating stroke in May 1940 and could no longer perform his duties as leader.[17] In October, Woodsworth wrote a letter to the 1940 CCF convention, in essence asking to retire from the leadership.[17] Instead, the delegates created the new position of Honorary President, abolished the President's position and re-elected M. J. Coldwell as the National Chairman.[17] Coldwell was then appointed acting House Leader on 6 November.[18] Woodsworth died on 21 March 1942, and Coldwell officially became the new leader at the July convention in Toronto and threw the party behind the war effort.[18] As a memorial to Woodsworth, Coldwell suggested that the CCF create a research foundation, and Woodsworth House was established in Toronto for that purpose.[17]

The party won a critical York South by-election on 8 February 1942, and in the process prevented the Conservative leader, former Prime Minister Arthur Meighen, from entering the House of Commons. In the 1945 election, 28 CCF MPs were elected, and the party won 15.6% of the vote.

The party had greatest success in provincial politics in the 1940s. In 1943, the Ontario CCF became the official opposition in that province, and in 1944 the Saskatchewan CCF formed the first democratic socialist government in North America, with Tommy Douglas as premier. Douglas introduced universal Medicare to Saskatchewan, a policy that was soon adopted by other provinces and implemented nationally by the Liberal Party of Canada during the administration of Prime Minister Lester B. Pearson.

Federally, during the Cold War, the CCF was accused of having Communist leanings. The party moved to address these accusations in 1956 by replacing the Regina Manifesto with a more moderate document, the Winnipeg Declaration. Nevertheless, the party did poorly in the 1958 federal election, winning only eight seats.

After much discussion, the CCF and the Canadian Labour Congress decided to join forces to create a new political party that could make social democracy more popular with Canadian voters. This party, initially known as the New Party, became the New Democratic Party (NDP) in 1961.

In 2018, New Democratic MP Erin Weir was expelled from the party caucus following complaints of sexual harassment. As of May 11, 2018, he declared that he was sitting as a CCF member. However, he did not otherwise attempt to revive the historical party. He did not run again in the subsequent election in 2019.

By the late 1940s the CCF had official or unofficial weekly newspapers in Alberta, British Columbia, and Saskatchewan; twice-monthly papers in Ontario and Manitoba; and a bimonthly in the Maritimes. A French-language paper in Quebec was also attempted at various times. The party also produced many educational books, pamphlets, and magazines, though these efforts declined in the 1950s. 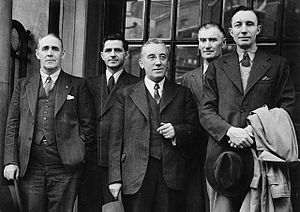 The national chairman was the equivalent of party president in most Canadian political parties and was sometimes referred to as such, in that it was largely an organizational role. In the case of the CCF, the national chairman oversaw the party's national council and chaired its meetings. Following an initial period in which Woodsworth held both roles, it was usually distinct from and secondary to the position of party leader. National president originally was also a title the leader held, as both Woodsworth and Coldwell held the title when they held seats in the House of Commons. In 1958, after Coldwell lost his seat, the position of national chairman was merged formally into the president's title and was held by David Lewis.[9]:235

"Towards the Dawn!" – a 1930s promotional image from Saskatchewan

The CCF song would be later popularized by the movie Prairie Giant: The Tommy Douglas Story.

A call goes out to Canada
It comes from out the soil—
Come and join the ranks through all the land
To fight for those who toil
Come on farmer, soldier, labourer,
From the mine and factory,
And side by side we'll swell the tide—
C.C.F. to Victory.[26]