Advertisement - You can get this game from STEAM
This article is about the concept in meteorology. For the fictional skyborne headquarters in the British television series Captain Scarlet and the Mysterons, see Cloudbase. 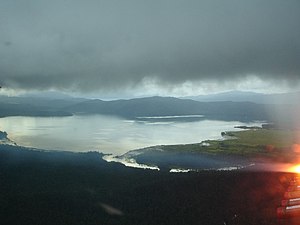 Photo of a cloud base taken above the island of Sulawesi, Indonesia, in 2005

A cloud base (or the base of the cloud) is the lowest altitude of the visible portion of a cloud. It is traditionally expressed either in metres or feet above mean sea level or above a planetary surface, or as the pressure level corresponding to this altitude in hectopascals (hPa, equivalent to the millibar).

The height of the cloud base can be measured using a ceilometer. This device reflects a beam of light off the cloud base and then calculates its distance using either triangulation or travel time.

Alternatively, the cloud base can be estimated from surface measurements of air temperature and humidity by calculating the lifted condensation level. One method for doing this, notably used by the U.S. Federal Aviation Administration, is as follows:

In well-defined air masses, many (or even most) clouds may have a similar cloud base because this variable is largely controlled by the thermodynamic properties of that air mass, which are relatively homogeneous on a large spatial scale. This is not the case for the cloud tops, which can vary widely from cloud to cloud, as the depth of the cloud is determined by the strength of local convection.

Clouds greatly affect the transfer of radiation in the atmosphere. In the thermal spectral domain, water is a strong absorber (and thus emitter, according to Kirchhoff's law of thermal radiation); hence clouds exchange thermal radiation between their bases and the underlying planetary surface (land or ocean) by absorbing and re-emitting this infrared radiation at the prevailing temperature – the lower the cloud base, the warmer the cloud particles and the higher the rate of emission. For a synthetic discussion of the impact of clouds (and in particular the role of cloud bases) on climate systems, see the IPCC Third Assessment Report, in particular chapter 7.2.

Cloud base is an important meteorological variable for aviation safety, as it determines whether pilots may use visual flight rules (VFR) or instrument flight rules for take-off and landing.