A piece of vitrified brick

Clinker bricks are partially-vitrified bricks used in the construction of buildings.

Clinker bricks are produced when wet clay bricks are exposed to excessive heat during the firing process, sintering the surface of the brick and forming a shiny, dark-colored coating.[1] [2][3] Clinker bricks have a blackened appearance, and they are often misshapen or split.[2] Clinkers are so named for the metallic sound they make when struck together.[4]

The brick-firing kilns of the early 20th century—called brick clamps or "beehive" kilns—did not heat evenly, and the bricks that were too close to the fire emerged harder, darker, and with more vibrant colors, according to the minerals present in the clay.[5] Initially, these clinkers were discarded as defective, but around 1900, the bricks were salvaged by architects who found them to be usable, distinctive, and charming. Clinker bricks were widely admired by adherents of the Arts and Crafts movement.[5][1]

In the United States, clinker bricks were popularized by the Pasadena, California architecture firm Greene and Greene, who used them for walls, foundations, and chimneys.[6] On the East Coast, clinkers were used extensively in the Colonial Revival style of architecture.[1]

Modern brick-making techniques do not produce clinker bricks, and they have become rare.[1] Builders can procure clinkers from salvage companies; alternatively, some brickmakers purposefully manufacture clinker bricks or produce imitations.[1] 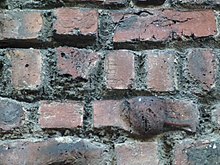 Clinker is sometimes spelled "klinker" which is the contemporary Dutch word for the brick. Both terms are onomatopoeic, derived from the Middle Dutch klinkaerd, later klinker, from klinken (“to ring, resound”).

Clinker bricks are also known as Dutch paving bricks.[citation needed] In 18th century New York, the Dutch interspersed dark clinkers with regular bricks. Some used clinkers to spell out their family initials on brick dwellings such as the Jan Van Hoesen House.

Clinkers consist of bits and ends, field-late and white-burning or red-burning clays. Through different mixtures of the raw ingredients, many varied colour nuances can be achieved. For the production of masonry units the source materials—clay and water—are mixed and formed industrially in a string extrusion process. For special purposes, for example the restoration of listed buildings, hand-formed clinkers are used. During the drying process, the water concentration decreases to approximately 3%. Then clinkers are fired at temperatures between 1,100 and 1,300 °C (2,010 and 2,370 °F) in a tunnel kiln (earlier in ring kilns), in contrast to the 800 to 1,200 °C (1,470 to 2,190 °F) temperature range seen with normal bricks. 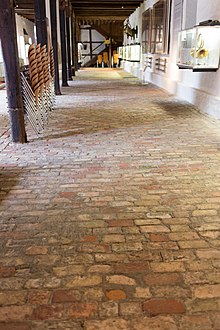 For use in facades, it is possible to cope varied shaped elements (e.g., clinker expressionism, see picture). Earlier clinkers were often used in civil engineering works, for example in bridge building, the construction of sewers and hydraulic structures, for mortar floodgates and hoppers or as paving stones for road construction.

The German sculptor Ernst Barlach worked with clinkers, which were produced according to his specifications, for example by the brickyard of Ilse Bergbau AG.[citation needed]

Clinker bricks take on a special colouring, often greenish tones, if burnt with peat. The Chilehaus and the Ramada Hotel in Hamburg are famous buildings built with peat-fired clinker. The last ring stove for peat-fired clinker still operating is in Nenndorf near Aurich (East Frisia), producing bricks marketed under the name “Wittmunder Torfbrandklinker” (peat-fired clinker of Wittmund).[citation needed]

Greppiner Klinker (clinker of Greppin) is a hard-burnt yellow clinker brick. Greppin clinkers were mainly used for facing railway structures at the end of the 19th and in the early 20th centuries.[citation needed]