A clade (/kleɪd/;[1][2] from Ancient Greek: κλάδος, klados, "branch"), also known as a monophyletic group or natural group,[3] is a group of organisms that are monophyletic—that is, composed of a common ancestor and all its lineal descendants.[4] Rather than the English term, the equivalent Latin term cladus (plural cladi) is often used in taxonomical literature.

The common ancestor may be an individual, a population, a species (extinct or extant), and so on right up to a kingdom and further. Clades are nested, one in another, as each branch in turn splits into smaller branches. These splits reflect evolutionary history as populations diverged and evolved independently. Clades are termed monophyletic (Greek: "one clan") groups.

Over the last few decades, the cladistic approach has revolutionized biological classification and revealed surprising evolutionary relationships among organisms.[5] Increasingly, taxonomists try to avoid naming taxa that are not clades; that is, taxa that are not monophyletic. Some of the relationships between organisms that the molecular biology arm of cladistics has revealed are that fungi are closer relatives to animals than they are to plants, archaea are now considered different from bacteria, and multicellular organisms may have evolved from archaea.[6]

The term "clade" is also used with a similar meaning in other fields besides biology, such as historical linguistics; see Cladistics § In disciplines other than biology.

The term "clade" was coined in 1957 by the biologist Julian Huxley to refer to the result of cladogenesis, the evolutionary splitting of a parent species into two distinct species, a concept Huxley borrowed from Bernhard Rensch.[7][8]

Many commonly named groups, rodents and insects for example, are clades because, in each case, the group consists of a common ancestor with all its descendant branches. Rodents, for example, are a branch of mammals that split off after the end of the period when the clade Dinosauria stopped being the dominant terrestrial vertebrates 66 million years ago. The original population and all its descendants are a clade. The rodent clade corresponds to the order Rodentia, and insects to the class Insecta. These clades include smaller clades, such as chipmunk or ant, each of which consists of even smaller clades. The clade "rodent" is in turn included in the mammal, vertebrate and animal clades.

History of nomenclature and taxonomy 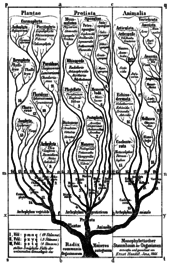 Early phylogenetic tree by Haeckel, 1866. Groups once thought to be more advanced, such as birds ("Aves"), are placed at the top.

The idea of a clade did not exist in pre-Darwinian Linnaean taxonomy, which was based by necessity only on internal or external morphological similarities between organisms – although as it happens, many of the better known animal groups in Linnaeus' original Systema Naturae (notably among the vertebrate groups) do represent clades. The phenomenon of convergent evolution is, however, responsible for many cases where there are misleading similarities in the morphology of groups that evolved from different lineages.

With the increasing realization in the first half of the 19th century that species had changed and split through the ages, classification increasingly came to be seen as branches on the evolutionary tree of life. The publication of Darwin's theory of evolution in 1859 gave this view increasing weight. Thomas Henry Huxley, an early advocate of evolutionary theory, proposed a revised taxonomy based on a concept strongly resembling clades,[9] although the term clade itself would not be coined until 1957 by his grandson, Julian Huxley. For example, the elder Huxley grouped birds with reptiles, based on fossil evidence.[9]

German biologist Emil Hans Willi Hennig (1913 – 1976) is considered to be the founder of cladistics.[10] He proposed a classification system that represented repeated branchings of the family tree, as opposed to the previous systems, which put organisms on a "ladder", with supposedly more "advanced" organisms at the top.[5][11]

Taxonomists have increasingly worked to make the taxonomic system reflect evolution.[11] When it comes to naming, however, this principle is not always compatible with the traditional rank-based nomenclature (in which only taxa associated with a rank can be named) because there are not enough ranks to name a long series of nested clades. For these and other reasons, phylogenetic nomenclature has been developed; it is still controversial. 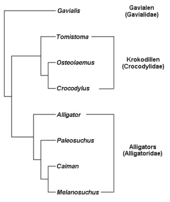 Gavialidae, Crocodylidae and Alligatoridae are clade names that are here applied to a phylogenetic tree of crocodylians.

A clade is by definition monophyletic, meaning that it contains one ancestor (which can be an organism, a population, or a species) and all its descendants.[note 1][12][13] The ancestor can be known or unknown; any and all members of a clade can be extant or extinct.

The science that tries to reconstruct phylogenetic trees and thus discover clades is called phylogenetics or cladistics, the latter term coined by Ernst Mayr (1965), derived from "clade". The results of phylogenetic/cladistic analyses are tree-shaped diagrams called cladograms; they, and all their branches, are phylogenetic hypotheses.[14] 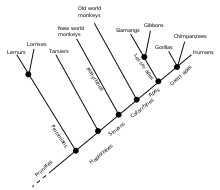 The relationship between clades can be described in several ways:

Clade is the title of a novel by James Bradley, who chose it both because of its biological meaning and also because of the larger implications of the word.[17]

An episode of Elementary is titled "Dead Clade Walking" and deals with a case involving a rare fossil.