The name is derived from three languages the first Scottish Gaelic: Clach meaning "Stone", Mannan is a derivative of the Brythonic name of the Iron Age tribe the Manaw, who inhabited the area, and the English word shire. As Britain's smallest historic county, it is often nicknamed "The Wee County". When written, Clackmannanshire is commonly abbreviated to Clacks. 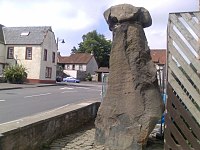 Clackmannan, the old county town, is named after the ancient stone associated with the pre-Christian deity Manau or Mannan.[1] The stone now rests on a larger stone beside the Tollbooth and Mercat Cross at the top of Main street, Clackmannan.[2]

The County of Clackmannan is one of Scotland's 33 historic local government counties, bordering on Perthshire, Stirlingshire and Fife. The county town was originally Clackmannan, but by 1822 neighbouring Alloa had outgrown Clackmannan and replaced it as the county town. Some rationalization of the county boundaries was undertaken in 1889–1890, and in 1971 the Muckhart and Glendevon areas, formerly in Perthshire, were transferred to Clackmannanshire.

In 1975, under the Local Government (Scotland) Act 1973, the existing burghs and 33 historic counties lost their administrative status, and a new hierarchy of regions and districts was created. Clackmannanshire was renamed the Clackmannan District. It became part of the Central Region, together with a Stirling District and a Falkirk District.

The Local Government etc (Scotland) Act 1994 replaced Scotland's two-tier local government with 32 unitary authorities, with the Clackmannan district becoming one of them. In response to strong local pressure, the first council for the unitary authority changed the name to "Clackmannanshire".

Clackmannanshire played a notable role in the 2014 Scottish independence referendum, where it was the first council area to declare its result. Though some predictions had seen the area as being favourable towards the "Yes" side, the "No" vote took 53.8% of the area's vote. This was seen as an early sign that Scotland would vote against independence.[3]

In the 2016 United Kingdom European Union membership referendum, Clackmannanshire voted by 58% to remain.[4]

In terms of population, Clackmannanshire is the smallest council area in mainland Scotland, with a population of 51,400 (in 2017[5]), around half of whom live in the main town and administrative centre, Alloa.

The motto of Clackmannanshire is "Look Aboot Ye" (Circumspice in Latin). In 2007 a re-branding exercise led to the area adopting the slogan "More Than You Imagine".[6]

As of September 2018, the political composition of Clackmannanshire Council is: 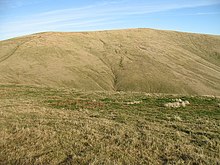 Ben Cleuch in the Ochil Hills, the highest point of Clackmannanshire at 721 metres (2,365 ft)

The Ochil Hills dominate the northern third of the county, where Ben Cleuch, Clackmannanshire's highest point, can be found. The northernmost part of the county lies in the Upper Glendevon Reservoir. Strathdevon is immediately to the south of the steep escarpment formed by the Ochil Fault, along which the Hillfoots Villages are located. Strathdevon mostly comprises a lowland plain a few hundred metres either side of the River Devon, which joins the Forth near Cambus. There is also the Black Devon river that flows past the town of Clackmannan to join the Forth near Alloa. This confluence once had a small pier, for portage to Dunmore pier on the south shore, and anchorage of smaller sailing ships, while others of greater tonnage could be accepted at Dunmore pier on the opposite banks of the Forth. Roughly in the centre of the county lies the Gartmorn Dam County Park, and there are small patches of forest in the south-east of the county. Two unnamed peninsulas are formed by meanders in the river Forth along Clackmannanshire's southern boundary; the easternmost of these has two small islands - Tullibody Inch and Alloa Inch - either side of it.

Clackmannanshire's coat of arms is blazoned:

Or, a saltire gules; upon a chief vert, between two gauntlets proper, a pale argent charged with a pallet sable. 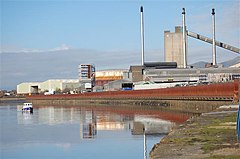 The main industries are agriculture, brewing, and formerly coal mining. In 2006, permission was given for a waterfront development of the Docks area of Alloa, which has been in decline since the 1960s.[citation needed] There is a large glass works at Alloa.[citation needed] 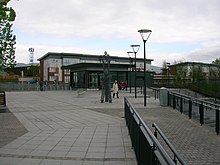 Alloa railway station reopened in May 2008; prior to this the county had no active railway stations. A new railway line was completed which connected Kincardine and Stirling, and thus reconnecting Alloa to the national rail network for the first time since 1968, was opened to the public. Scheduled passenger services operate only between Alloa and Stirling and onwards to Glasgow and Edinburgh; the line to Kincardine is normally used by freight trains only but some special excursion trains are run by charter operators. An opening ceremony was held on Thursday 15 May, with the first fully functioning passenger service commencing in the new summer timetable on 19 May 2008.[7][8] The service provides an hourly connection between Alloa, Stirling and Glasgow Queen Street. 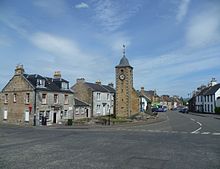 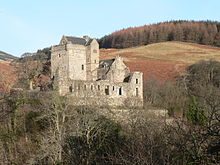 Castle Campbell, a medieval castle situated above the town of Dollar 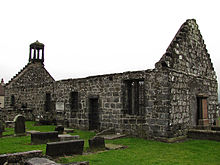