The party was formed in the run-up of the 2013 general election to support the outgoing Prime Minister Monti and continue his political agenda.[6] In the election SC was part of a centrist coalition named With Monti for Italy,[7] along with Union of the Centre of Pier Ferdinando Casini and Future and Freedom of Gianfranco Fini.[8]

In April 2013 SC became part of the grand coalition government led by Enrico Letta of the Democratic Party. In February 2014 after Letta's resignation, Civic Choice supported the cabinet of Matteo Renzi. After that, the party did not support the cabinet of Paolo Gentiloni and, by the end of 2017, joined forces with Silvio Berlusconi's Forza Italia.

In order to compete in the upcoming general election, on 4 January 2013 technocratic Prime Minister Mario Monti launched SC as an electoral list of the "civil society" to implement his "agenda". It was announced that SC would be part of the With Monti for Italy (CMI) coalition, alongside the Union of the Centre (UdC) and Future and Freedom (FLI).

At its beginnings SC was composed of several groups and individuals, who were represented in the party's lists:[11] 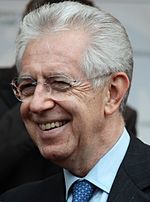 In the 2013 general election SC obtained 8.3% of the vote, 37 deputies (in its own lists) and 15 senators (within CMI).[29] After the election, SC deputies and senators formed joint groups named "Civic Choice", including also UdC and FLI MPs, in both houses of Parliament.

The party began to take shape too: on 13 March Monti, who replaced Andrea Riccardi as provisional president, appointed Andrea Olivero as coordinator; on ⍌337⍍ Monti was unanimously elected president by the party's assembly;[30] on ⍌338⍍ the leadership proposed by Monti was approved with only three abstentions.[31] In the event Olivero was confirmed coordinator, Alberto Bombassei was appointed first vice president, and Benedetto Della Vedova, a former member of the Italian Radicals, Forza Italia, the PdL and finally FLI, spokesperson. The rest of the leadership was composed mainly by former Democrats: Maria Paola Merloni (vice president), Lorenzo Dellai (party leader in the Chamber of Deputies), Gianluca Susta (party leader in the Senate), Andrea Causin (organizational secretary), Pietro Ichino (platform coordinator) and Gregorio Gitti (local structures' coordinator). No member of Future Italy, a liberal[32] think tank, took a leading role.

Since then, the party was often riven by internal disputes. Monti twice presented (and later retracted) his resignation from president.[33][34] In late July he clashed with the "Catholic" wing of the party, especially with Olivero, whom he accused of being too close to the UdC (whose deputies and senators were part of SC's parliamentary groups).[35][36][37] Also Future Italy, seemed to have little patience with the "Catholic" wing and even to be willing to distance from the party.[38][39]

In this phase, an issue which divided SC was the debate on European party affiliation. Some, including the party's "Catholics", former members of PdL and Monti himself,[40] favoured joining the European People's Party (EPP), while others, notably those close to Future Italy, Benedetto Della Vedova and Linda Lanzillotta, preferred the Alliance of Liberals and Democrats for Europe (ALDE) Party.[41][42] It later emerged that Monti had favoured the EPP and had consequently started talks with the EPP's leadership in order to appease the party's Christian democrats led by Mauro and avoid a split.[43]

On 17 October 2013 Monti resigned as president of SC and was replaced by his deputy Alberto Bombassei as acting president. Monti cited his disagreement with 12 senators (out of 20), including Mario Mauro, Andrea Olivero, Gabriele Albertini, Pier Ferdinando Casini (UdC leader), Maria Paola Merloni, Luigi Marino and Lucio Romano. Particularly, Monti criticized Mauro's line of unconditioned support to the government and of transforming SC in a larger centre-right political party, open to the PdL.[43][44] One of the 12 senators, Tito Di Maggio, was even unveiled as PdL–SC–UdC joint candidate for President in Basilicata.[45]

After Monti's abrupt departure, spokesperson Benedetto Della Vedova, who represented the liberal wing of the party (including Pietro Ichino, Gianluca Susta, Linda Lanzillotta, etc.),[46][47] announced that SC would "go on" as a "liberal, people's, reform and European party"[citation needed] and would never form a partnership with the PdL.[48] Lanzillotta remarked that "Italy needs a liberal, people's, deeply reform-minded and Europeanist party"[49] and that "we did not take votes for giving life to a Catholic party and being part of a centre-right still led by Berlusconi.[50] For his part, during a TV interview, Monti stated that "my and SC's commitment does not end now" and that "many tell me they did not vote for SC for the specific reason that we were with president Casini; they might have been right".[51]

On 22 October the executive committee voted in favour of the separation from the UdC.[52] The "popular" majority of SC's parliamentary group in the Senate responded by dismissing Susta as floor leader,[53][54] while Olivero stated that the Populars aimed at forming a party modelled on Germany's Christian Democratic Union.[47] On 6 November the SC senatorial group, dominated by Populars, elected L. Romano as new floor leader; the decision was not endorsed by Bombassei[55] and was opposed by Montiani and liberals, who talked about dismissing Lorenzo Dellai from leader in the Chamber as retaliation.[56][57]

On 15 November the Populars walked away from the party's national assembly and left the party altogether. The assembly elected Bombassei president and appointed Stefania Giannini secretary.[58][59][60] On 23 November the Populars, led by Mauro, Dellai and Olivero, launched Populars for Italy (PpI).[61] On 10 December the party's break-up was effective in Parliament: 20 deputies (led by Dellai) and 12 senators (led by L. Romano) launched For Italy (PI) groups, while 26 deputies (led by Andrea Romano) and 8 senators (led by Susta) confirmed their allegiance to SC. All the UdC MPs but one joined PI.[62][63]

From the centre to the Democrats 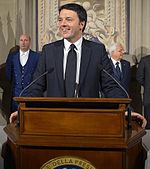 After Matteo Renzi's election as secretary of the Democratic Party (PD) in December, SC started to approach the centre-left, while ruling out any alliance with the centre-right, once again led by Silvio Berlusconi's Forza Italia (FI). SC had long expressed a certain affinity for Renzi,[64][65] and, in early February 2014, Stefania Giannini finally declared that she saw "its party more as the right-wing of a reformed and reforming left than the left-wing of a right that still has in Berlusconi its standard-bearer".[66]

Subsequently, SC was a keen supporter of the replacement of Enrico Letta with Renzi.[67][68]

On 22 February 2014 the Renzi Cabinet was sworn in with Giannini, a university professor, as minister of Education.[69]

On 4 March it was announced that SC would run in the 2014 European Parliament election within European Choice (SE), an electoral list including, among others, Democratic Centre, Act to Stop the Decline and the Italian Liberal Party.[70][71] Members of SC topped SE's slates in two of five constituencies.[72][73] The decision to side with the Alliance of Liberals and Democrats for Europe (ALDE) Party, cherished by Guy Verhofstadt (ALDE's candidate for President of the European Commission) and Romano Prodi,[74][75] prompted the resignation of Andrea Causin, one of SC's few remaining Christian democrats, from organizational secretary.[76]

On 10 April Bombassei resigned as president of the party, citing his disagreement with the party's political re-positionment (no longer a third-party force, but a close ally of Renzi's PD, under Giannini's leadership), the change in party's identity and "prevailing personal ambitions".[77]

On election day SC/SE received just 0.7% of the vote and failed to return any MEPs. Consequently, Giannini resigned from secretary.[78][79][80]

In October A. Romano, who had left the position of floor leader in the Chamber some months earlier, left the party in order to join the PD.[81]

In November the party's assembly decided that the new leadership, replacing Giannini and Balduzzi, who had been elected to the Supreme Council of Magistrature and had resigned from Parliament, will be selected in a congress to be held in January 2015.[82]

Two candidates, Irene Tinagli and Enrico Zanetti, announced their bid for secretary,[83] while Pietro Ichino was the front-runner to become the party's president.[84] However, in mid December, Tinagli retired from the race.[85] In January 2015 Benedetto Della Vedova came out against Zanetti on the grounds that SC should continue to exist only through its parliamentary groups,[86] tried to stop the congress (along with Giannini, Bombassei, Ichino, Tinagli, Carlo Calenda, Linda Lanzillotta and other senior members)[87] and finally decided to run for secretary (along with a third candidate, Luciana Cazzaniga).[88] During the congress, postponed two weeks in order not to overlap with the presidential election triggered by President Giorgio Napolitano's resignation, Zanetti was virtually unanimously elected secretary.[89]

However, on 6 February, two days before the congress, eight senior members of the party (including six former Democrats), including its minister (Giannini), its deputy minister (Calenda), two deputies and five senators (including Giannini), had already left the party;[90][91] all of them, except Calenda[92] (who later became minister), joined the PD. As a result, the party was deprived of its parliamentary group in the Senate. In fact, of the two remaining senators, Della Vedova left during the congress,[93] while Monti was no longer active.

In July 2015 the party's national board elected Salvatore Matarrese president, Angelo D'Agostino first vice president and Valentina Vezzali vice president. More important, the assembly decided that the party would change name and symbol by the end of the summer, in the effort of being more competitive in the 2016 municipal elections.[94][95] The new chosen name, "Citizens for Italy", would be used only in local elections, indeed.[96][97]

In January 2016, during a cabinet's reshuffle, Zanetti was promoted deputy minister of the Economy, while another SC deputy, Antimo Cesaro, was appointed undersecretary at Culture.[98][99][100][101] Despite this, the party, which had virtually disappeared from opinion polls, continued to lose deputies and its group in the Chamber was reduced to 20 individuals by February.[62] In the meantime, Zanetti explained that there were similarities between SC and Denis Verdini's Liberal Popular Alliance (ALA), and, according to Corriere della Sera, the two groups could soon merge.[102][103][104] In the meantime, SC formed a federative pact with the Moderates.[105][106][107]

In July, after that the majority of the party's deputies had come in opposition of an alliance with the ALA (a party basically formed by splinters form Berlusconi's FI), Zanetti led four deputies out of the parliamentary group. Contextually, Zanetti, who pretended to be still the leader of SC, started to organise a joint group with the ALA and, possibly, Flavio Tosi's Act!,[108][109][110] and a new liberal party with the contribution of Marcello Pera, a former President of the Senate and former leader of FI in Tuscany.[111] The party's national board sided with Zanetti in July[112][113] and the national assembly did the same in October, with 63 votes in favour and 39 against.[114]

Road toward the centre-right

In September 2017 Zanetti re-positioned SC from the centre-left to the centre-right and, more specifically, in close alliance with Berlusconi's FI.[121] The 2017 Sicilian regional election, for which SC announced that its candidates would run within FI's lists,[122][123] marked the first time that SC officially sided with the centre-right. In November, the party's national board endorsed Zanetti's political line and marked SC's official adhesion to the centre-right coalition.[124][125] The decision was opposed by a vocal minority of the party's membership and three deputies (Ernesto Auci, D'Agostino and Vezzali) subsequently left[126] and formed the European Civics.[127]

In December 2017 SC was a founding member of Us with Italy (NcI), a pro-Berlusconi centrist electoral list within the centre-right coalition for the 2018 general election, along with Act!, splinters of Popular Alternative (AP – two groups, a liberal one led by Enrico Costa and a Christian-democratic one led by Maurizio Lupi), Direction Italy (DI), Popular Construction (CP) and the Movement for the Autonomies (MpA).[128][129][130] NcI was later enlarged to the UdC[131][132][133] and Identity and Action (IdeA),[134][135] with the goal of reaching 3%, required to win seats from proportional lists under a new electoral law.

In the election NcI obtained 1.3% and SC had no deputies or senators elected. After that, the party was de facto disbanded.