Established in 1840, the City of Adelaide Municipal Corporation was the first municipal authority in Australia. At its time of establishment, Adelaide's (and Australia's) first mayor, James Hurtle Fisher, was elected. From 1919 onwards, the municipality has had a Lord Mayor, as of 2019[update] being Sandy Verschoor, who replaced Martin Haese in 2018.

Initially the new Province of South Australia was managed by Colonisation Commissioners. Colonial government commenced on 28 December 1836. The first municipality was established in 1840 as The City of Adelaide Municipal Corporation, the first municipality in the country. However, due to a combination of constitutional difficulties arising from the mayor's resignation, hostility of the incoming Governor George Grey, and falling revenues due to the onset of the colony's first economic crisis, the corporation became moribund in 1843, after the Province had become a Crown colony established by the South Australia Act 1842. From 1843 to 1849, control and management reverted to the colonial government, and from 1849 to 1852 the municipality was managed by a Commission with five members. With the positive economic effects of the Victorian gold rush, a formal municipality was re-established in 1852, and "has operated continuously ever since".[3][4][5][6] However, The city's relationship with the state and federal government has been described as being 'a continually abrasive relationship'.[7]

The Council started in 1840 with nineteen members, who chose four of their number to be Aldermen, and then one of these (James Hurtle Fisher) to be Mayor. In 1852 the municipality was divided into four wards. Three Councillors and one Alderman were chosen, who in turn selected the Mayor. In 1861 the Mayor was chosen by all the electors and the position of Alderman was temporarily abolished. In 1873 the municipality was divided into six Wards, each represented by two Councillors. In 1880 the office of Alderman was recreated; they were chosen by electors of all Wards. The office of Mayor was raised to the stature of Lord Mayor by Royal Letters Patent in 1919. The Lord Mayor received the right to be styled ‘The Right Honourable’ in 1927.[4][6]

The Arms of the City of Adelaide were granted by the Heralds College in 1929.[3] In 1982 the Council approved the design of the Armorial Flag.[3]

In 2015, the Council became the first government of any kind in Australia to offer a financial incentive for installing battery systems.[8]

As of 2019[update] the City of Adelaide Council consists of 12 elected members, including the Lord Mayor and 11 Area and Ward Councillors, elected for a 4-year term.[12]

Around the time of the November 2018 Council elections, reports emerged of the formation of a "Team Adelaide" faction,[13] later leading to friction between elected members.[14]

At the end of the 20th century, the city had little more than thirty per cent of the population it had in 1915 (when the population reached more than 43,000), and about 5,000 less than the 1855 population of 18,259.[6] In proposing reforms and his advocacy for town planning legislation, Charles Reade illustrated the Adelaide slums associated with the city's high population levels with lantern-slides accompanying his lecture "Garden cities v. Adelaide slums and suburbs" in the Adelaide Town Hall on 8 Oct 1914.[15] Reade was attacked by the Adelaide City Council who fought against the Town Planning and Housing Bill reforms[16] and the press pointed out the wickedness of families being forced to 'herd together more and more in overcrowded conditions of living' and the 'sheer nonsense on the part of the City Council to pretend' that there were no slums in the city:[17]

In seeking a return to higher density population levels, Adelaide City Council launched its 'New Directions' with its three themes of Capacity, Vivacity and Audacity on 3 July 2001.[19] The "Capacity" theme proposed doubling the city's population by 2010 and increasing the number of City visitors and workers.

According to the Annual Reports,[20] the population has increased rapidly, due to the targets stated in the strategic plans developed at about that time. 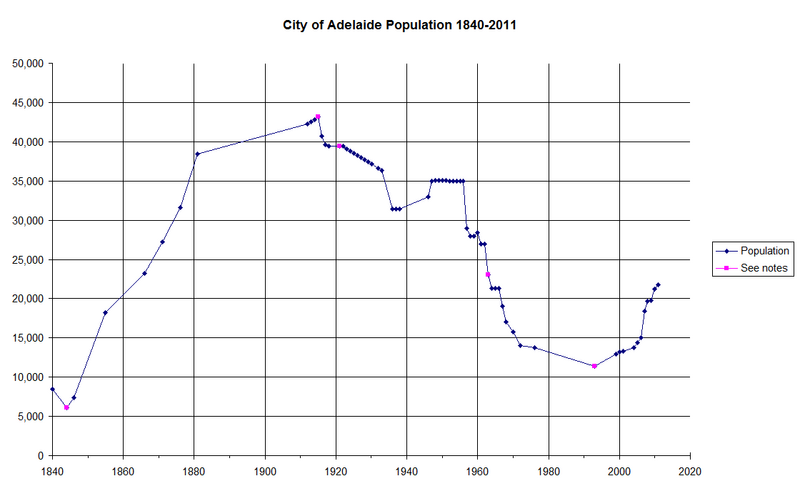 The following table sets out the figures of various types of city population in the 21st century:[20][22]

The City of Adelaide's administrative offices are located in the Colonel William Light Centre building at 25 Pirie Street, adjacent to the Adelaide Town Hall in King William Street.

Apart from providing the usual services like rubbish collection and controlling local development, the City of Adelaide owns and operates a number of city services and amenities, including:

The City of Adelaide has been involved in the Sister Cities program since 1972 and has international partnership arrangements with: [31]

The armorial flag of Adelaide was approved on 2 August 1982, replacing the unofficial coat of arms on white background, which had been flown outside the Town Hall on special occasions for about 50 years.[32]

Key to the City

The Key to the city is presented by the Lord Mayor to an individual or group to acknowledge and recognise their outstanding contribution to the city of Adelaide.[33]