Cirrostratus /ˌsɪroʊˈstrɑːtəs/ is a high-level, very thin, generally uniform stratiform genus-type of cloud. It is made out of ice-crystals, which are pieces of frozen water. It is difficult to detect and it can make halos. These are made when the cloud takes the form of thin cirrostratus nebulosus.[1] The cloud has a fibrous texture with no halos if it is thicker cirrostratus fibratus. On the approach of a frontal system, the cirrostratus often begins as nebulous and turns to fibratus. If the cirrostratus begins as fragmented of clouds in the sky it often means the front is weak. Cirrostratus is usually located above 5.5 km (18,000 ft). Its presence indicates a large amount of moisture in the upper troposphere.[2] Clouds resembling cirrostratus occasionally form in polar regions of the lower stratosphere. Polar stratospheric clouds can take on this appearance when composed of tiny supercooled droplets of water or nitric acid.[3] 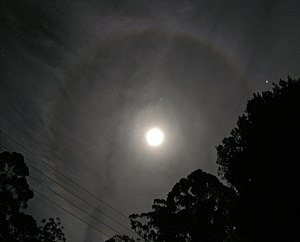 Cirrostratus clouds sometimes signal the approach of a warm front if they form after cirrus and spread from one area across the sky, and thus may be signs that precipitation might follow in the next 12 to 24 hours[4] or as soon as 6–8 hours if the front is fast moving. If the cirrostratus is broken fibratus, it can mean that the front is weak and that stratus rather than nimbostratus will be the precipitating cloud (meaning drizzle or snow grains instead of moderate rain or snow). Cumulus humilis or stratocumulus clouds are often found below cirrostratus formations, due to the stable air associated with cirrostratus creating an inversion and restricting convection, causing cumuliform clouds to become flattened. Contrails also tend to spread out and can be visible for up to an hour in cirrostratus.

The phrase "milky sunshine" is often, as well as referring to haze or light mist, used to refer to the milky look of the sky when cirrostratus is present.