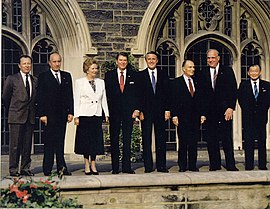 De Mita was born in Nusco in the Avellinese hinterland. As a young man De Mita joined Christian Democracy and entered politics. He rose through the ranks of the party, becoming a member of its council in 1956, a member of Parliament in 1963 and a member of the Italian cabinet in 1973. During the next decade he served as Minister of Industry and then as Minister of Foreign Trade. De Mita became chairman of the party in 1982 at a time when its power was declining. He was re-elected in 1986 with 60% support from the party.

After the elections of 1987, De Mita waited a year to become Prime Minister, and then served as Prime Minister for a year, maintaining the party chairmanship. At the beginning of that service, on 16 April 1988, in Forlì, Red Brigades killed Senator Roberto Ruffilli, an advisor of De Mita. In social policy, De Mita's time in office witnessed the passage of a law in May 1988 that introduced a new benefit for salaried workers called "benefit for the family nucleus" ("assegno per il nucleo familiare"), with the amount varying depending on the number of family members and the family income of the previous year.[3]

De Mita returned in Parliament, after a lag of two years, in 1996 (and then re-elected in 2001 and 2006). He then joined the Italian People's Party and later Democracy is Freedom - The Daisy, party of which he is regional coordinator for Campania. He headed the Olive Tree's list in his region in 2006, and he participated in the transformation that coalition into a single party (the Democratic Party). He joined the Union of the Centre. After the 2008 elections, De Mita was not elected at the Italian Senate, but he was nominated as the Campania coordinator of the party. De Mita won a seat in the European Parliament in the June 2009 European election. On 25 May 2014 De Mita was elected as mayor of Nusco, his native town.