Ukraine has had an influence on the history of the cinema. Prominent Ukrainian directors include Oleksandr Dovzhenko, Dziga Vertov and Serhiy Paradzhanov. Dovzhenko is often cited as one of the most important early Soviet filmmakers,[5][6] as well as being a pioneer of Soviet montage theory and founding Dovzhenko Film Studios. In 1927 Dziga Vertov moved from Moscow to Ukraine. At the film studio VUFKU he made several avant-garde documentaries, among them The Eleventh Year, Man with a Movie Camera and first Ukrainian documentary sound film Enthusiasm (Symphony of the Donbass). Paradzhanov was an Armenian film director and artist who made significant contributions to Ukrainian, Armenian and Georgian cinema; he invented his own cinematic style, Ukrainian poetic cinema,[6] which was totally out of step with the guiding principles of socialist realism.

Despite a history of important and successful productions, the industry has often been characterised by a debate about its identity and the level of Russian and European influence.[7] Ukrainian producers are active in international co-productions, while Ukrainian actors, directors and crew feature regularly in Russian (and formerly Soviet) films. Successful films have been based on Ukrainian people, stories or events, including Battleship Potemkin, Man with a Movie Camera, and Everything Is Illuminated.

The Ukrainian State Film Agency owns National Oleksandr Dovzhenko Film Centre, film copying laboratory and archive, and takes part in hosting of the Odessa International Film Festival. Another festival, Molodist in Kyiv, is the only FIAPF accredited International Film Festival held in Ukraine; the competition program has sections for student films, first short film, and first full feature films from all over the world. It is held annually in October.

History of the cinema in Ukraine 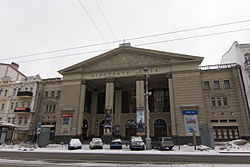 On the territory of Odesa film studio, there is a Museum of the Cinema, in which you can find out about many interesting facts on the history of the cinema in general and history of Ukrainian cinema as a part. Here you can find historic materials, from the invention of cinema, to the postmodern, digital and avant garde.

is administrated by the Ministry of Culture of Ukraine and the Ukrainian Association of Cinematographers.

Kinomania is the local distributor of films by Warner Brothers (New Line Cinema).[11] 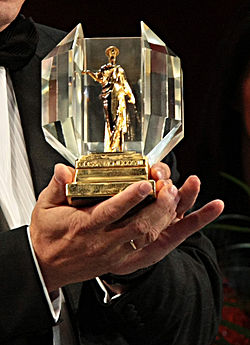 In 2006 Ukrainian engineer and inventor Anatoliy Kokush was awarded two Oscars for the concept and development of the Ukrainian Arm gyro-stabilized camera crane and the Flight Head.