The cinema of Canada or Canadian cinema refers to the filmmaking industry in Canada. Canada is home to several film studios centres, primarily located in its three largest metropolitan centres: Toronto, Ontario, Montreal, Quebec, and Vancouver, British Columbia. Industries and communities tend to be regional and niche in nature. Approximately 1,000 Anglophone-Canadian and 600 Francophone-Canadian feature-length films have been produced, or partially produced, by the Canadian film industry since 1911.

The cinema of English-speaking Canada is heavily intertwined with the cinema of the neighbouring United States: though there is a distinctly Canadian cinematic tradition, there are also Canadian films that have no obvious Canadian identity (examples include Porky's and Meatballs), Canadian-American co-productions filmed in Canada (including My Big Fat Greek Wedding and the Saw series); American films filmed in Canada (including the Night at the Museum and Final Destination films, among hundreds of others); and American films with Canadian directors and/or actors. Canadian directors who are best known for their American-produced films include Norman Jewison, Jason Reitman, Paul Haggis, and James Cameron; Cameron, in particular, wrote and directed the second and third highest-grossing films of all time, Avatar and Titanic, respectively.

Evangeline (1913), the first feature film in Canada; made by Canadian Bioscope Company

The first films that was shot in Canada were made at Niagara Falls, by Frenchmen Auguste and Louis Lumière in June 1896 and Edison Studios in December 1896. James Freer is recognized as the first Canadian filmmaker. A farmer from Manitoba, his documentaries were shown as early as 1897 and were toured across England, under the title Ten Years in Manitoba, in an effort to promote immigration to Manitoba.

The first fiction film, Hiawatha, the Messiah of the Ojibway, was made in 1903 by Joe Rosenthal.[5] The first Canadian feature film, Evangeline, was produced by the Canadian Bioscope Company in 1913 and shot in Nova Scotia.

In 1917, the province of Ontario established the Ontario Motion Picture Bureau, "to carry out educational work for farmers, school children, factory workers, and other classes." The Canadian Government Motion Picture Bureau followed suit in 1918. The British Columbia Patriotic and Educational Picture Service, which produced and distributed short films about British Columbia in an attempt to counteract "Americanism" in Hollywood films, operated from 1920 to 1923.

The Cinematograph Films Act 1927 established a quota of films that had to be shown in British cinemas that would be shot in Great Britain as well as nations in the British Empire that stimulated Canadian film production. However the Cinematograph Films Act 1938 mollified the British film industry by specifying only films made by and shot in Great Britain would be included in the quota, an act that severely reduced Canadian film production.[6]

In 1938, the Government of Canada invited John Grierson, a British film critic and film-maker, to study the state of the government's film production and this led to the National Film Act of 1939 and the establishment of the National Film Board of Canada, an agency of the Canadian government. In part, it was founded to create propaganda in support of the Second World War, and the National Film Act of 1950 gave it the mandate "to interpret Canada to Canadians and to other nations." In the late 1950s, Québécois filmmakers at the NFB and the NFB Candid Eye series of films pioneered the documentary processes that became known as "direct cinema" or cinema vérité.

Federal government measures as early as 1954, and through the 1960s and 1970s, aimed to foster the development of a feature film industry in Canada; in 1968 the Canadian Film Development Corporation was established (later to become Telefilm Canada) and an effort to stimulate domestic production through tax shelters peaked in the late 1970s (see Meatballs below).

As in all cinema, the line between broadcast and cinema continues to be blurred in Canada as the means of production and distribution converge.

A typical Canadian film production is made with money from a complex array of government funding and incentives, government mandated funds from broadcasters, broadcasters themselves, and film distributors. International co-productions are increasingly important for Canadian producers. Smaller films are often funded by arts councils (at all levels of government) and film collectives.

The National Film Board of Canada is internationally renowned for its animation and documentary production. More recently it has been criticized for its increasingly commercial orientation; only one third of its budget is now spent on the production of new films.[citation needed]

Much of Canada's film industry services American producers and films driven by American distribution, and this part of the industry has been nicknamed "Hollywood North".

The major production centres are Toronto, Montreal and Vancouver. In 2011, Toronto ranked third in North America, behind only Los Angeles and New York City, in total industry production;[7] however, for several years previous, Vancouver's industry outputs exceeded those for Toronto.

Alliance Atlantis (acquired by CanWest Global Communications in 2007) is the major Canadian distributor of American and international films and in 2003 it ceased to produce films (and almost all television) to focus almost exclusively on distribution. Lions Gate Entertainment has also become a major distributor in recent years.

Distribution continues to be a problem for Canadian filmmakers, though an established network of film festivals also provide important marketing and audience exposure for Canadian films. The major festival is the Toronto International Film Festival, considered one of the most important events in North American film, showcasing Hollywood films, cinema from around the world, and Canadian film. The smaller Vancouver International Film Festival features films from around the world, and festivals in Montreal, Sudbury (Cinéfest), and Halifax (Atlantic Film Festival)—among other cities—are also important opportunities for Canadian filmmakers to gain exposure among film audiences. Very often, however, a Canadian film's largest opportunity to achieve a significant audience comes from negotiating television carriage rights with a broadcaster such as CBC Television, Crave or Showcase.[8]

Problems in the Canadian film industry 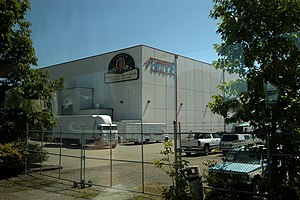 Of all Canadian cultural industries, English-Canadian cinema has the hardest time escaping the shadow of its American counterpart.[citation needed] Between the marketing budgets of mainstream films, and the largely US-controlled film distribution networks, it has been nearly impossible for most distinctively Canadian films to break through to a wide audience.[8]

Although Canadian films have often received critical praise, and the National Film Board has won more Academy Awards than almost any other institution (for both their animation and documentary work), in many Canadian cities moviegoers do not even have the option of seeing such films, as they have poor distribution and are not shown at any theatres. One This Hour Has 22 Minutes sketch parodied an Atom Egoyan-like director whose films had won numerous international awards, but had never actually been released or exhibited.[citation needed]

Almost all Canadian films fail to make back their production costs at the box office.[citation needed] For example, Men With Brooms made CA$1,000,000 in its general domestic release, which by Canadian standards is fairly high. However, it was made on a budget of over CA$7,000,000. French-Canadian films, on the other hand, are often more successful—as with French-language television, the language difference makes Quebec audiences much more receptive to Canadian-produced films. In most years, the top-grossing Canadian film is a French-language film from Quebec. (See also Cinema of Quebec.) By comparison, Australian films, made in a country with a smaller population than Canada's, more frequently make their money back from the domestic market. Many do comparatively better; the best known example is Mad Max, made with the then unknown Mel Gibson, and with a budget of A$350,000, and which made A$5.6 million in its domestic release alone.

Although many Canadians have made their names in Hollywood, they have often started their careers in Los Angeles, despite Toronto, Vancouver or Montreal being thriving filmmaking centres in their own right. Some actors or directors who have started their early careers in Canada include: David Cronenberg, John Candy, Lorne Michaels, Dan Aykroyd, Michael J. Fox, Mike Myers, Ivan Reitman, Derek Harvie, Seth Rogen, Eugene Levy, Tom Green, Scott Mosier, and Paul Haggis. However, despite these successes, several actors have favoured moving to Los Angeles to further pursue their careers.

Canada's difficulties in the film industry are often difficult to explain. The following explanations have been proposed for why Canadian films and television have often failed to establish an audience in Canada or internationally:

For many years the most successful Canadian film of all time at the Canadian box office was Porky's; it was produced by a Canadian team (though directed by Bob Clark, an American, and shot in Florida), but only with one of the major American studios backing distribution. (Porky's' record was widely reported as broken in 2006 by the bilingual police comedy Bon Cop, Bad Cop, but that assessment does not take inflation into account. Porky's still retains its status as the most successful Canadian film internationally.[citation needed])

Meatballs makes an excellent case study on common criticisms of the Canadian film industry. Produced and shot entirely in Canada on a budget of CA$1,600,000, it was a tremendous hit, one of the most financially successful Canadian films of all time. As with Children of a Lesser God, although it takes place in a summer camp, there is nothing recognizably Canadian about the location or the characters, except for a Montreal Canadiens sweater. The starring role went to American comedian Bill Murray in his earliest featured film role. The chief love interest was played by Canadian Kate Lynch, who won the Genie Award that year for Best Actress. The casting of Americans in the "Tax-Shelter Era", as well as today, often caters to an American audience. However, it provided Murray with his breakout role. Almost all of its box office gross was in the United States, where it took in US$43,000,000. It received a much more limited release in Canada.

In 2010, Resident Evil: Afterlife grossed more than $280 million at the box office internationally and nearly $7 million domestic, making it the most successful production in Canadian film history.[9][10][11]

According to Telefilm Canada, From Script to Screen, the two-year-old feature film policy created to improve the success rate of Canadian films, is seeing results. Before the initiative, the market share for Canadian films was 1.4 per cent and is now 3.6 per cent. Furthermore, the French-language cinema accounts for 20 per cent of the market.

In recent years, there has been a cultural resurgence in Canada's aforementioned documentary stream. Films exploring Canada's identity and role on the world stage have become popular. Due to a political and social split between their American counterparts, Canadian independent documentaries have begun garnering a cult status. Current examples are Mark Achbar's award-winning and top grossing Canadian feature documentary The Corporation, and Albert Nerenberg's underground hit Escape to Canada. These films not only nurture homegrown talent, inspiring local industry but also creating a unique voice for Canada itself.

In 2015 two Canadian co-productions, partly funded by Telefilm Canada, were nominated for Best Picture at the 88th Academy Awards: Room and Brooklyn.[12]

For all the industry's challenges, quite a few Canadian films have succeeded in making a cultural impact. Some of the most famous or important Canadian films include:

Notable Canadian expatriate directors who are or have worked primarily in Hollywood include: