Chuquicamata (/tʃuːkiːkəˈmɑːtə/ choo-kee-kə-MAH-tə; referred to as Chuqui for short) is the largest open pit copper mine by excavated volume in the world[citation needed]. It is located in the north of Chile, just outside Calama at 2,850 m (9,350 ft) above sea level, 215 km (134 mi) northeast of Antofagasta and 1,240 km (770 mi) north of the capital, Santiago. Flotation and smelting facilities were installed in 1952, and expansion of the refining facilities in 1968 made 500,000 ton annual copper production possible in the late 1970s. Previously part of Anaconda Copper, the mine is now owned and operated by Codelco, a Chilean state enterprise, since the Chilean nationalization of copper in the late 1960s and early 1970s. Its depth of 850 metres (2,790 ft) makes it the second deepest open-pit mine in the world after Bingham Canyon Mine in Utah, United States.

Besides the Incas and Spanish explorers, Chilean and English companies mined the brochantite veins from 1879 to 1912.[5] The opencast was the biggest pit in the world during the 1990s. But it has lost its foremost position and the newer Escondida mine is now the world's largest producing mine with 750,000 metric tons of production which was 5.6% of the world's production in 2000. Copper has been mined for centuries at Chuquicamata as was shown by the discovery in 1899 of "Copper Man", a mummy dated at about 550 A.D. which was found trapped in an ancient mine shaft by a fall of rock.[6] It is also said that Pedro de Valdivia obtained copper horseshoes from the natives when he passed through in the early 16th Century.[7]

Mining activity was relatively small scale until the War of the Pacific when Chile annexed large areas of both Peru and Bolivia north of its old border, which included Chuquicamata. There was then a great influx of miners into the area drawn in by 'Red Gold Fever' (La Fiebre del Oro Rojo)[8] and soon Chuquicamata was covered with mines and mining claims, over 400 at one point. It was a wild and disorganised camp. Title to claims was often in doubt due to the defective 1873 Mining Code, and the capture of Calama by the 1891 Chilean Civil War rebels who confiscated mines belonging to loyalists further complicated titles.[1] Many of the miners lived in makeshift and lawless shanty towns around the mines, including Punta de Rieles, Placilla and Banco Drummond, which provided alcohol, gambling and prostitution and where murder was almost a daily occurrence. As late as 1918 the army had to be sent in to keep order.[9] The towns were eventually buried under the waste dumps to the east of the mine.

These early operations mined veins such as the Zaragoza and Balmaceda, which were high grade with values up to 10-15% copper, and disregarded the low grade disseminated ore.[9] One attempt was made to process the low grade ore in 1899-1900 by Norman Walker, a partner in La Compañia de Cobres de Antofagasta, but it failed leaving the company deeply in debt.[10] However, mining never really developed satisfactorily in the early days because of the lack of water, the isolation and lack of communications, lack of capital and fluctuations in the copper price. Nevertheless larger mining companies eventually emerged, organised as commercial rather than mining operations to avoid the imperfections of the mining code,[11] and started to buy up and consolidate the small mines and claims.

Haul truck in Chuquicamata in 2016.

The modern era started when the American engineer Bradley[clarification needed] finally developed a method of working low grade oxidised copper ores. In 1910 he approached the lawyer and industrialist Albert C Burrage who sent engineers to examine Chuquicamata. It was the start of copper mining by the Chile Exploration Company of the Guggenheim Group. Their reports were good and in April 1911 he started to buy up mines and claims, mainly from the larger mining companies, in association with Duncan Fox y Cia., an English entrepreneur.[1][2]

Since Burrage did not have the capital to develop a mine, he approached the Guggenheim Brothers. They examined his claims and estimated reserves at 690 million tonnes grading 2.58% copper.[12] The Guggenheims also had a process for treating the low grade ores developed by Elias Anton Cappelen Smith[13] and were immediately interested, organised the Chile Exploration Company (Chilex) in January 1912 and eventually bought out Burrage for US$25 million (or $662 million today) in Chilex stock. E. A. Cappelen Smith, consulting metallurgist for M. Guggenheim's Sons, worked out the first process for the treatment of Chuquicamata copper oxide ore about 1913, and directed a staff of engineers operating a pilot plant at Perth Amboy, New Jersey, on three shifts for an entire year.[14][15]

Chilex then went ahead with the development and construction of a mine on the eastern section of the Chuquicamata field. (It acquired the remainder of the field gradually over the next 15 years). The 10,000 tons per day leaching plant was planned to produce 50,000 tons of electrolytic copper annually. Amongst the equipment purchased were steam shovels from the Panama Canal.[2][16] A port and an oil-fired power plant were built at Tocopilla, 140 km (90 mi) to the west and an aqueduct was constructed to bring water in from the Andes.[17] Production started on May 18, 1915. Actual production rose from 4,345 tonnes in the first year to 50,400 tonnes in 1920 and 135,890 tonnes in 1929 before the Depression hit and demand fell.[18] 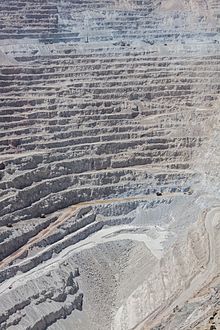 View of the wall.

The Guggenheims sold the mine to Anaconda Copper in 1923.[19]

Production for many years came from the oxidised capping of the orebody which merely required leaching and then electrowinning of the copper, but by 1951 the oxidised reserves were largely exhausted and the company built a mill, flotation plant and smelter to treat the huge reserves of underlying supergene copper sulfides. These secondary sulfides arise from the leaching of the overlying ore and its re-deposition on and replacement of the deeper primary (hypogene) sulfides.

In 1957 the Exotica deposit (South Mine) was discovered beneath tailings, which turned out to be the largest known deposit of exotic copper. This led Anaconda to build an oxide plant, concentrator, smelter, refinery, and town, all next to the mine, plus a power plant in Tocopilla. However, in 1971, the mine was nationalized and operations were then assumed by CODELCO.[5]

For many years it was the mine with the largest annual production in the world but was recently overtaken by Minera Escondida. Nevertheless it remains the mine with by far the largest total production of approximately 29 million tonnes of copper to the end of 2007 (excluding Radomiro Tomić).[20][21] Despite over 90 years of intensive exploitation it remains one of the largest known copper resources. Its open pit is the world's largest at 4.3 km (2.7 mi) long, 3 km (1.9 mi) wide and over 900 m (3,000 ft) deep [22] and its smelter[23] and electrolytic refinery (855,000 tonnes p.a.) are amongst the world's largest. Chuquicamata is also a significant producer of molybdenum.

Chuquicamata is now amalgamated with the operating Radomiro Tomić mine to the north (but still on the same mineralised system), the developing Alejandro Hales mine just to the south (formerly Mansa Mina, a slightly impolite description) and the recently discovered 'Toki cluster' of copper porphyries to form the Codelco Norte division of Codelco.[24]

"Chuquicamata clearly belongs to the broad class of porphyry copper deposits. Practically the entire Chuquicamata orebody is hosted by the Chuqui Porphyry Complex, made up of East, Fine Texture, West and Banco porphyries." These Cu-Mo porphyry systems formed during the Eocene-Oligocene and exhibit classic "zoned alteration-mineralization features." A regional fault zone gave rise to hydrothermal activity which concentrated metal and sulfide minerals. The West Fault is a major fault that separates Chuquicamata into two parts, west and east. This fault is part of the Cenozoic West Fault System in Chile extending several hundred km in a general north-south to northeast strike direction. The Chuqui Porphyry Complex lies in the mineralized east part of the pit while the barren Fortuna Complex lies in the west part. "a large proportion of the copper at Chuquicamata occurs in veins and veinlets filling faults and fault-related shatter zones." "Pyrite is present everywhere" and chalcocite and covellite appear as both supergene and hypogene minerals. "Molybdenite is conspicuous at Chuquicamata, almost all of it carried by quartz veins."[5]

Copper mining has long been the most consistent of Chilean exports; and in current day, it still accounts for almost one-third of all foreign trade. Yet that 33% is down from a peak of almost 75% in earlier years.

Copper has been mined in the land area between central Chile and southern Peru since Colonial times. Yet it was not until the 20th century that copper reached the importance of other mining exports such as saltpeter or silver. Before the first world war, saltpeter, collected in Chile from abundant deposits of caliche in the Atacama Desert, was the main source of nitrates in the world. After the World War I, because of the production of artificial nitrates, synthesized first in Germany by the combination of the Haber process and the Ostwald process, the world market for saltpeter, which was Chile’s main export, collapsed. In turn, Chile’s economy became heavily dependent on the copper industry. It was from that period that copper became known as “Chile’s salary”.

By the late 1950s, the three largest copper mines in Chile were Chuquicamata, El Salvador mine, and El Teniente. Chuquicamata and El Salvador were owned and operated by the Anaconda Copper Company. These mines were mainly self-contained and self-sustaining settlements. They were complete with their own cities to house the workers, their own water and electrical plants, schools, stores, railways, and even in certain cases their own police forces.

In 1971, Chile's newly elected Socialist president Salvador Allende confiscated the Chuquicamata mine from Anaconda.[19]:108 Anaconda lost two-thirds of its copper production. Two years later, the US-backed military government that overthrew the Communist-backed Allende paid a compensation of $250 million (or $1.4 billion today) to Anaconda.