The party follows its European counterparts in many ways, positioning itself as a family-friendly party. While founded on the basis of advocating moral-cultural Christian issues, the party has broadened its political profile over time, although Christian values remains its core distinction. It is considered an overall centrist party, combining socially conservative views with more left-leaning economic positions.[7] The party is an observer member of the European People's Party (EPP).

The Christian Democrats' leader from 1983 to 1995, Kjell Magne Bondevik, was one of the most prominent political figures in modern Norway, serving as Prime Minister from 1997 to 2000 and 2001 to 2005. Under the old leadership of Bondevik and Valgerd Svarstad Haugland, the party was to some extent radicalized and moved towards the left. Due largely to their poor showing in the 2009 elections, the party has seen a conflict between its conservative and liberal wings.[22] Until 2019 the leader was Knut Arild Hareide, who led the party into a more liberal direction as part of a "renewal" process,[23][24] and introduced climate change and environmentalism as the party's most important issues.[25]

In social policy the Christian Democratic Party generally have conservative opinions. On life issues, the party opposes euthanasia, and abortion, though it may support abortion in cases of rape or when the mother's life is at risk. The party supports accessibility to contraception as a way of lowering abortion rates.[26] They also want to ban research on human fetuses, and have expressed skepticism for proposals to liberalise the biotechnology laws in Norway.[27] Bondevik's second government made the biotechnology laws of Norway among the strictest in the World, with support from the Socialist Left Party and the Centre Party, but in 2004 a case regarding a child with thalassemia brought this law under fire.[28][29] On gay rights issues, the party supports possibilities for gay couples to live together, but opposes gay marriage and gay adoption rights. The party maintains neutrality on the issue of gay clergy, calling that an issue for the church.[30]

Since the party was established, a declaration of Christian faith was required for a person to be a representative in the party. Membership had no such requirement. The increase of support from other religions, including Islam, stimulated efforts to abolish this rule.[31] At the 2013 convention the rule was modified. The new rules require that representatives work for Christian values but do not require them to declare a Christian faith.[32] This latter point was considered the "last drop" for some conservative elements of the party, who as a result broke away and founded The Christians Party.[33]

The Christian Democratic Party was founded as a reaction to the growing secularism in Norway in the 1930s. Cultural and spiritual values were proposed as an alternative to political parties focusing on material values. The immediate cause of its foundation was the failure of Nils Lavik, a popular figure in the religious community, to be nominated as a candidate for the Liberal Party, for the parliamentary elections in 1933. In reaction to this, Kristelig Folkeparti was set up, with Lavik as their top candidate in the county of Hordaland. He succeeded in being elected to Stortinget, the Norwegian parliament. No other counties were contested. At the next elections, in 1936, the party also ran a common list with the Libral Party in Bergen, and succeeded in electing two representatives from Hordaland with 20.9% of the local votes.[34] In 1945, at the first elections after the Nazi occupation of Norway, the party was organised on a nationwide basis, and won 8 seats.

The Christian Democrats became part of a short-lived non-socialist coalition government along with the Conservative Party, the Liberal Party and the Centre Party in 1963. At the elections of 1965, these four parties won a majority of seats in Stortinget and ruled in a coalition government from 1965 to 1971.

The 1981 elections left the non-socialists with a majority in parliament, but negotiations for a coalition government failed because of disagreement over the abortion issue.[36] However, this issue was later toned down, and from 1983 to 1986 and 1989 to 1990, the Christian Democrats were part of coalitions with the Conservative Party and the Centre Party.

In the 2005 election the Christian Democrats received only 6.8%, and the party became part of the opposition in the Storting. In 2013 the Conservative Party and the Progress Party formed a new government based on a political agreement with the Christian Democrats and the Liberal party with confidence and supply. In the 2017 election the party got only 4.2% and did not sign a new agreement, but got a politically strategic position as the conservative minority government mainly depended on their votes to get a majority.

In late 2018 the Christian Democrats were split over the question of a potential government participation and the future direction of the party. At a party meeting in early November 2018, the delegates were asked whether to stay in opposition or to join either a "red" or a "blue" government coalition with party leader Knut Arild Hareide favouring a centre-left government with Labour and Centre parties, and deputy leaders Olaug Bollestad and Kjell Ingolf Ropstad wanting to join the existing right-leaning cabinet of Erna Solberg. The delegates decided with a narrow majority of eight votes to join the existing Solberg's Cabinet with Conservatives, Liberals and the Progress Party.[37] In January 2019, after successful negotiations with the coalition parties the Christian Democrats eventually joined the government and Hareide resigned as party leader.[38] In April 2019, 33-year-old Minister of Children and Family Kjell Ingolf Ropstad was elected new party leader.[39]

Geographically, the Christian Democrats enjoy their strongest support in the so-called Bible Belt, especially in Sørlandet. In the 2005 elections, their best results were in Vest-Agder with 18.9% of the vote, compared to a national average of 6.8%.[40]

KrF has also sought support among the Muslim minority in Norway, pointing to their restrictive policies on alcohol and pornography, although party's support for Israel concerns some Muslim voters.[43]

Support for KrF in the municipalities of Norway at the Norwegian parliamentary elections of 2017. 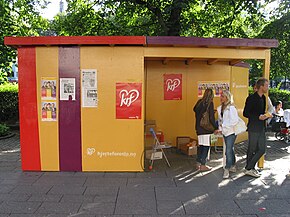 Campaign booth on Karl Johans gate ahead of the 2007 Norwegian local elections.