Chitungwiza – known colloquially as Chi Town – is a high-density dormitory town in Zimbabwe. It is approximately 30 kilometres (19 mi) south-east of the Harare city centre. It was formed in 1978 from three townships: Seke, Zengeza, and St Marys.From early 2000s another township named Manyame Park (New St Marys) was established making them four then in the mid 2000s another township named Rockview was also formed to make it 5 main townships.

Zengeza 4 is the heart of Chitungwiza. Despite being relatively the largest section, Zengeza 4 is home to a shopping mall (Chitungwiza Town Centre) which is located at the boarder with Seke (Unit D). PaGomba is also another major shopping centre located in Zengeza 4. Zengeza 4 is also proud to be home to Chitungwiza Central Hospital one of the major referral centres in Zimbabwe with renal unit and Citimed, the largest private health institution in Chitungwiza. Zengeza 4 also pays homage to Global Institute of Business, publishers of the Nexus Book Series as well as the Chitungwiza Arts Centre.

In Chitungwiza, a prospective city the services are provided by Chitungwiza Municipality [2] which is run by the Chitungwiza Municipality Ward Councillors. There are 25 wards in Chitungwiza, and from the 25 ward councillors, a mayor, deputy mayor and finance committee chairperson are selected from these councillors. The councillors including those elected for posts serve for a 5-year term of office and are overally elected by the ward residents during Zimbabwe hamornised elections. The Chief executive officer, that is the one who is in charge of the management of the organization, and is in charge of all employees of Chitungwiza Municipality, is the Town Clerk. The current Mayor and Deputy Mayor are Cllr Lovemore Maiko and Cllr Makweza respectively, for the 2018–2023 term of office. The Town Clerk is Dr George Makunde,[3] and since he is a Government employee, there is no term of office. Dr. Makunde is currently on suspension from duty. The Director of Engineering Services is Eng David Duma. The Director of Health and Environmental Services is Dr. Tonderai Kasu, and he has served as the Acting Town Clerk of Chitungwiza. Dr. Tonderai Kasu served as the Acting Town Clerk of Chitungwiza from the 10th of December 2019 to the 21st of August 2020.[4] The Finance Director is Mrs Evangelista Machona, and she is the current Acting Town Clerk of Chitungwiza. 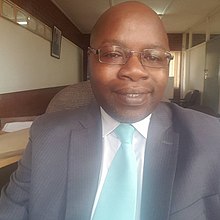 There are two main highways which connect the city to Harare.[6] Public transport is composed of regular single level buses and more reliably minibus taxis (called emergency taxis locally). Chitungwiza has over 30 primary schools and over 25 secondary schools.

In terms of education, Chitungwiza has several schools some run by the local council, some by government and a few privately owned. Among the schools you find Zengeza High School, Seke 1 High School and Nyatsime College which each holds national records of both being the best result producers of the year. In higher education, Seke Teachers' College which opened its doors to the public in 1982 trains primary school teachers in the general course and Early Childhood Development. St Mary's ECD centre, the national model ECD centre is also found in Chitungwiza.

There are several public municipal clinics and privately owned surgeries which complement the Chitungwiza Hospital efforts and another bigger hospital called South Medical or CitiMed as of present.

The Chitungwiza Aquatic Complex, built in 1995 for the All Africa Games, is no longer functional, and serves as a music and church venue.[7]

Chitungwiza is located in the traditional territory of the Hera people. Its most distinguished historical figure is the Pasipamire, the pre-colonial svikiro (spirit medium) of Chaminuka. He is remembered for predicting the colonisation of the country by the British.

Johane Masowe we Chishanu is one of largest religion worshiping in the open spaces and vleis. There are several churches, belonging to different Christian denominations including the United Family International Church let by Prophet Makandiwa, the Apostolic Faith Mission in Zimbabwe, Power of the holy spirit and Royal Family International Church led by Apostle Collin Shumba.

The economy is supported by informal trade, residents earn a living through selling green groceries at informal markets such as Chikwanha, Jambanja and Huruyadzo.

Many musicians come from Chitungwiza, including

Chitungwiza Art Centre was established in 1997 to facilitate the growth of the visual arts industry, art promoters like AVAC Arts have created a platform for artists to market and sell their artworks internationally.

ChiL FM is a community radio project by the youth of Chitungwiza to promote local talent in areas of arts and business.

The name Chitungwiza was adopted from a Shona name which is shrine of an inspirational spirit medium (Svikiro) Chaminuka who had his shrine called *dungwiza* raChaminuka in the modern day Chitungwiza back in the late 19th century.[9]

Chitungwiza gained full municipal status in 1996 and is the third-largest and the fastest-growing urban centre in Zimbabwe. According to the 2012 Population Census, the city had a population of 321,782. . Most of the people work in Harare, as there is very little industry in Chitungwiza. There are growth points (an urban area with limited tax breaks) there and bus ranks. The Chitungwiza City Council is dominated by the opposition Movement for Democratic Change.

Chitungwiza was one of the areas targeted by Operation Murambatsvina in 2005 in which many residents lost their homes and businesses. Some of the Businesses that were lost during Operation Murambatsvina include a home industry that was operating in the outskirts adjacent to Zengeza 1, in this complex were over 50 Businesses, and over a thousand people lost their jobs.