The early history of Chinese Australians involved significant immigration from villages of the Pearl River Delta in Southern China. Less well-known are the kinds of society Chinese Australians came from, the families they left behind and what their intentions were in migrating. Gold rushes lured many Chinese to the Australian colonies. (From the mid-19th century, Chinese dubbed Australia the New Gold Mountain after the Gold Mountain of California in North America.) They typically sent money to their families in the villages, regularly visited their families, and retired to their home villages after many years working as a market gardeners, shopkeepers or cabinet-makers. As with many overseas Chinese groups the world over, early Chinese immigrants to Australia established Chinatowns in several major cities, such as Sydney (Chinatown, Sydney), Melbourne (Chinatown, Melbourne, since the 1850s) and Brisbane (Chinatown, Brisbane), as well as in regional towns associated with the goldfields such as Cairns (Cairns Chinatown).[5] 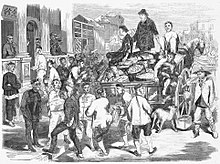 Chinese peoples have a long and continuing role in Australian history. There were early links between China and Australia when Macau and Canton were used as an important trading ports with the fledgling colony. Mak Sai Ying (also known as John Shying) was the first officially recorded Chinese migrant in 1818. After his arrival he spent some time farming before, in 1829, he became prominent as the publican of The Lion in Parramatta. Early 19th Century migration was in limited numbers and sporadic, primarily those who came in this period were free merchants or adventurers and, the more common, indentured labourers. 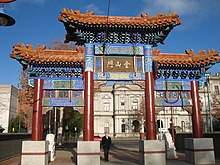 Gate to Bendigo's Golden Dragon Museum, dedicated to the history of the Chinese on the Victorian goldfields

The Australian Gold Rushes are what first lured thousands of Chinese to the country. In 1855 in Melbourne there were 11,493 Chinese arrivals.[6] This was startling considering that barely five years previous, Melbourne's entire population had only been around 25,000 people. Due to the widespread racist sentiments in parliament and on the goldfields, the first of many immigration restrictions and Chinese targeting laws was passed in late 1855. However, due to the long, poorly regulated borders between the colonies of Australia the numbers of Chinese on the goldfields continued to swell. Upon the goldfields Chinese peoples faced many hardships. There were violent anti-Chinese riots; the Buckland Riot, the Lambing Flats Riots, as well as general discrimination and prejudice. However, there were many establishments in this period that would have a lasting effect on the history of Australia and the history of Chinese in Australia. One of these establishments were the Chinese camps, which most often, later, became Chinatowns in Australia. There was also the establishment and the consolidation of power for Chinese societies, many of these are still active in Australia today. These societies provided support and community for the Chinese in the colonies.

After the gold rushes the numbers of Chinese living in the cities swelled and their businesses and industries contributed much to growth of Melbourne and Sydney in the late 19th century. Mei Quong Tart was a prominent business figure in Sydney. However, there were very few Chinese women migrating to Australia. At one point in the 1860s the numbers of Chinese in Australia was around 40,000. Of these, it is believed only 12, were women.[7] This gender imbalance meant that some Chinese men married women of European descent but many had it in their hearts to return to China. 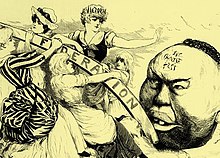 Published in 1888, this cartoon depicts the anti-Chinese sentiment that was one of the driving forces behind the push for federation.

Anti-Chinese sentiment also strongly contributed to the establishment of the Federation of Australia. Some of the first Acts of the new federation would establish the White Australia Policy. This policy made it almost impossible for anyone new to migrate from China to Australia. After federation the population of Chinese in Australia steadily declined. Despite the declining numbers people with Chinese heritage still played their part in Australian history. There were over 200 people with Chinese heritage who fought for Australia in World War I, including the decorated sniper Billy Sing. A similar number fought for Australia in World War II.

The final end of the White Australia Policy from the 1960s saw new arrivals from the Chinese diaspora and for the first time significant numbers from non-Cantonese speaking parts of China. The first wave of arrivals were ethnic Chinese refugees from Vietnam and Cambodia during the 1970s. This was followed by economic migrants from Hong Kong and Taiwan in the 1980s and 1990s, whose families often settled in the capital cities. New institutions were established for these arrivals and old ones such as the Chinese Chamber of Commerce revived, while numerous Chinese language newspapers were once again published in the capital cities.

After the 1989 Tiananmen Square protests, then-Australian Prime Minister, Bob Hawke, allowed students from China to settle in Australia permanently. Since the 2000s, with the rapid development of China's economy, there has been an explosion in the number of immigrants from China, which have frequently been Australia's largest source of new immigrants since 2000. In 2015-16, China (excluding Hong Kong and Macau) was the second largest source of immigrants to Australia behind India.[8] China (excluding Hong Kong, Macau and Taiwan) is now the third largest foreign birthplace for Australian residents, after England and New Zealand.[9]

The White Australia Policy of the early 20th century severely curtailed the development of the Chinese communities in Australia. However, since the advent of multiculturalism as a government policy in the 1970s, many people of Chinese ethnicity from Asia (especially China, Indonesia, Malaysia, Singapore, Vietnam and Cambodia) have immigrated to Australia.

Before the end of the 20th century, Chinese Australians were predominately of Cantonese and Hakka descent from Guangdong, Hong Kong and Macau, and Cantonese was the dominant language.[17] Due to more recent immigration from other regions of China, Mandarin has surpassed Cantonese by number of speakers. At the 2016 census, 596,711 persons declared that they spoke Mandarin at home (the most common language spoken at home in Australia after English at 2.5%),[4] followed by Cantonese at 280,943 (the third most common after English at 1.2%).[4] In total, there were 927,944 people who spoke a Chinese language at home,[4] a figure which includes Mandarin and languages such as Shanghainese, Cantonese, Hokkien and Hakka. Second or higher generation Chinese Australians are often either monolingual in English or bilingual to varying degrees with Chinese.

In a 2004 study on the intermarriage pattern in Australia, the proportion of second-generation Chinese Australians with spouses of Anglo-Celtic ancestry was approximately 21% and for third generation it was 68%.[22]

According to Australian Bureau of Statistics, in 2012 Chinese immigrant mothers had a total fertility of 1.59 children per woman, lower compared to the Australian average of 1.94.[23]

According to the census data collected in the last twenty years, among Australians with full or partial Chinese ancestry there has been a general decline of institutional religions (between 2006 and 2016, Buddhism fell from 24.1% to 15.7% and Christianity fell from 29.8% to 23.4%). In 2016, 55.4% of the Chinese Australians fit within the census category of "not religious, secular beliefs or other spiritual beliefs", rising significantly from 37.8% in 2006. These shiftings in religious demography may be due to the incoming of new immigrants from China who generally do not have a formal religious affiliation, and many of whom are involved in the native Chinese religion (including Chinese ancestral worship) which has been on the rise in China over the last decades.

The pathways Chinese-Australian families choose to motivate their children is partly based on their cultural values which emphasise scholastic excellence, and partly on their own experiences in their native as well as in the host country. Customarily, activities taking place in Chinese-Australian homes were related to the education of their children. Regular family discussions on educational matters and career paths had a modelling effect. The key feature of these families was that parental involvement in their children's school-related activities remained high throughout the high school time of their children. Chinese-Australian families indicated that diligence, a deep cultural respect for education and motivation to become educated was quite strong among first generation immigrants. Chinese-Australians have a significant influence and place considerable pressure on their children academically.[28][29][30] In addition, mathematics achievement and participation of high school students have a strong correlation towards the success or achievement goals and sense of competence.[31] In addition, Chinese students from migrant backgrounds, in comparison to those from refugee backgrounds, are more academically successful.[32]

Many Chinese Australians work in white collar middle class jobs. But Chinese Australians are under-represented in occupations such as journalism, law and other professions that require language skills and face to face contact. First-generation Chinese Australians also experience problems in getting white collar jobs commensurate with their qualifications and work experience instead they go into business and operate convenience stores, car dealerships, grocery stores, coffee shops, news agencies and restaurants while sacrificing to pay for their children education as perceiving education as the only available channel of social mobility, substantial investment in their children's education at a disproportionate sacrifice to family finance and social well-being is an indication of parental concerns and expectations.[33][34]