Advertisement - You can get this game from STEAM
Not to be confused with China University of Geosciences (Beijing).
University in Wuhan, China

The China University of Geosciences (simplified Chinese: 中国地质大学(武汉); traditional Chinese: 中國地質大學(武漢); pinyin: Zhōngguó Dìzhì Dàxué (Wǔhàn); abbreviated 地大 or CUG) is a key national university directly under the administration of the Education Ministry of the People's Republic of China. It is located in Wuhan, the capital of Central China's Hubei Province.[1] It is a Chinese Ministry of Education Double First Class Discipline University, with Double First Class status in certain disciplines.[2]

It is regarded as one of the top geosciences university in China and exerts considerable influence on the Chinese mining and oil industry. Its notable alumni include Wen Jiabao, the Premier of China's State Council between 2003 and 2013, who attended the China University of Geosciences when it was known as the Beijing Institute of Geology (BIG). The motto "Being austere and simple, keeping on practice and acting for truth" is from him.[1]

The Main Campus of CUG is located in No. 388 Lumo Road, Wuhan, is large and scenic campus. It has a large annual enrollment and has a wide range of courses other than geosciences.[1] Its Yifu Museum (donated by Sir Run Run Shaw) is known for housing China’s top ranked displays of dinosaur fossils, mineral and rock specimens.

The New Campus of CUG was built in the Future technology city of Wuhan.[3]

The history of China University of Geosciences dates back to Beijing Institute of Geology (BIG; simplified Chinese: 北京地质学院; traditional Chinese: 北京地質學院; pinyin: Běijīng Dìzhì Xuéyuàn) which was a merger of the geology departments of Tsinghua University, Peking University, Tianjin University and Tangshan Railway College in 1952. It was among China's first 16 key universities back in the 1950s. The university suspended operations from 1966–1970 due to the Cultural Revolution. 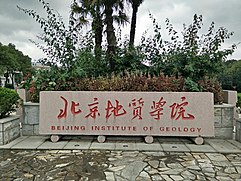 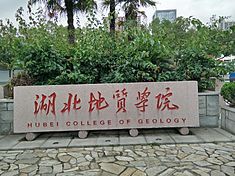 In 1975 the campus was moved to Wuhan, and the school was renamed Wuhan College of Geology (WCG; simplified Chinese: 武汉地质学院; traditional Chinese: 武漢地質學院; pinyin: Wǔhàn Dìzhì Xuéyuàn). In 1978 BIG reopened in Beijing with the help of Deng Xiaoping. In 1986 the Chinese Government ratified the foundation of the Beijing Graduate School of WCG. It was ranked as one of the first 33 Graduate Schools nationwide.