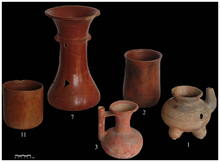 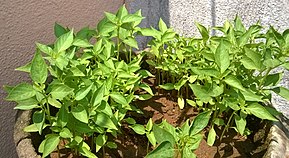 listen)), is the fruit of plants from the genus Capsicum which are members of the nightshade family, Solanaceae.[4] Chili peppers are widely used in many cuisines as a spice to add heat to dishes. The substances giving chili peppers their intensity when ingested or applied topically are capsaicin and related compounds known as capsaicinoids.

Chili peppers originated in Mexico.[5] After the Columbian Exchange, many cultivars of chili pepper spread across the world, used for both food and traditional medicine.

Cultivars grown in North America and Europe are believed to all derive from Capsicum annuum, and have white, yellow, red or purple to black fruits. In 2016, the world's production of raw green chili peppers amounted to 34.5 million tons, with China producing half of the world's total.[6]

Capsicum fruits have been a part of human diets since about 7,500 BC, and are one of the oldest cultivated crops in the Americas,[7] as origins of cultivating chili peppers are traced to northeastern Mexico some 6,000 years ago.[8][9] They were one of the first self-pollinating crops cultivated in Mexico, Central America, and parts of South America.[7]

Peru is considered the country with the highest cultivated Capsicum diversity because it is a center of diversification where varieties of all five domesticates were introduced, grown, and consumed in pre-Columbian times.[10] Bolivia is considered to be the country where the largest diversity of wild Capsicum peppers is consumed. Bolivian consumers distinguish two basic forms: ulupicas, species with small round fruits including C. eximium, C. cardenasii, C. eshbaughii, and C. caballeroi landraces; and arivivis with small elongated fruits including C. baccatum var. baccatum and C. chacoense varieties.[10]

When Christopher Columbus and his crew reached the Caribbean, they were the first Europeans to encounter Capsicum, calling them "peppers" because they, like black pepper of the genus Piper known in Europe, have a spicy, hot taste unlike other foods.[11]

The spread of chili peppers to Asia occurred through its introduction by Portuguese traders, who – aware of its trade value and resemblance to the spiciness of black pepper – promoted its commerce in the Asian spice trade routes.[7][11][12] It was introduced in India by the Portuguese towards the end of the 15th century.[13] In 21st century Asian cuisine, chili peppers are commonly used across diverse regions.[14][15]

Thai pepper, similar in variety to the African birdseye, exhibits considerable strength for its size

Though there are only a few commonly used species, there are many cultivars and methods of preparing chili peppers that have different names for culinary use. Green and red bell peppers, for example, are the same cultivar of C. annuum, immature peppers being green. In the same species are the jalapeño, the poblano (which when dried is referred to as ancho), New Mexico, serrano, and other cultivars.

Peppers are commonly broken down into three groupings: bell peppers, sweet peppers, and hot peppers. Most popular pepper varieties are seen as falling into one of these categories or as a cross between them.

A display of hot peppers and a board explaining the Scoville scale at a Houston, Texas, grocery store

The substances that give chili peppers their pungency (spicy heat) when ingested or applied topically are capsaicin (8-methyl-N-vanillyl-6-nonenamide) and several related chemicals, collectively called capsaicinoids.[18][19] The quantity of capsaicin varies by variety, and on growing conditions. Water-stressed peppers usually produce stronger pods. When a habanero plant is stressed, by absorbing low water for example, the concentration of capsaicin increases in some parts of the fruit.[20]

When peppers are consumed by mammals such as humans, capsaicin binds with pain receptors in the mouth and throat, potentially evoking pain via spinal relays to the brainstem and thalamus where heat and discomfort are perceived.[21] The intensity of the "heat" of chili peppers is commonly reported in Scoville heat units (SHU). Historically, it was a measure of the dilution of an amount of chili extract added to sugar syrup before its heat becomes undetectable to a panel of tasters; the more it has to be diluted to be undetectable, the more powerful the variety, and therefore the higher the rating.[22] The modern method is a quantitative analysis of SHU using high-performance liquid chromatography (HPLC) to directly measure the capsaicinoid content of a chili pepper variety. Pure capsaicin is a hydrophobic, colorless, odorless, and crystalline-to-waxy solid at room temperature, and measures 16,000,000 SHU.

Capsaicin is produced by the plant as a defense against mammalian predators and microbes, in particular a fusarium fungus carried by hemipteran insects that attack certain species of chili peppers, according to one study.[23] Peppers increased the quantity of capsaicin in proportion to the damage caused by fungal predation on the plant's seeds.[23] 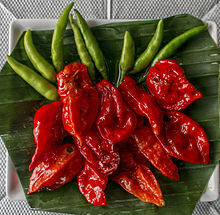 A wide range of intensity is found in commonly used peppers:

Some of the world's hottest chili peppers are:

NOTE: SHU claims marked with an asterisk (*) have not been confirmed by Guinness World Records.[33] 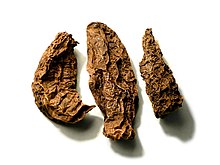 Chili pepper pods are, technically, berries. When used fresh, they are most often prepared and eaten like a vegetable. Whole pods can be dried and then crushed or ground into chili powder that is used as a spice or seasoning. Chilies can be dried to prolong their shelf life. Chile peppers can also be preserved by brining, immersing the pods in oil, or by pickling. 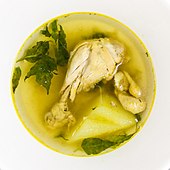 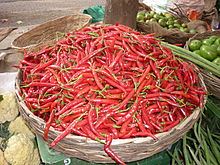 Chilies at a market in India 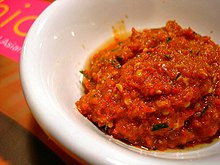 Sambal is the name for chili paste in Indonesian, Malaysian and Singaporean cuisine 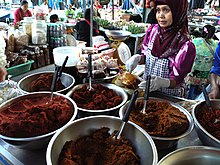 Many fresh chilies such as poblano have a tough outer skin that does not break down on cooking. Chilies are sometimes used whole or in large slices, by roasting, or other means of blistering or charring the skin, so as not to entirely cook the flesh beneath. When cooled, the skins will usually slip off easily.

The leaves of every species of Capsicum are edible. Though almost all other Solanaceous crops have toxins in their leaves, chili peppers do not.[citation needed] The leaves, which are mildly bitter and nowhere near as hot as the fruit, are cooked as greens in Filipino cuisine, where they are called dahon ng sili (literally "chili leaves"). They are used in the chicken soup tinola.[34] In Korean cuisine, the leaves may be used in kimchi.[35] In Japanese cuisine, the leaves are cooked as greens, and also cooked in tsukudani style for preservation.

Many Mexican dishes, including variations on chiles rellenos, use the entire chili. Dried whole chilies may be reconstituted before grinding to a paste. The chipotle is the smoked, dried, ripe jalapeño. In the northern Mexican states of Sinaloa and Sonora, chiltepin peppers (a wild pepper) are used in cheeses and soups to add spiciness to dishes. In southern Mexico, mole sauce is used with dried chiles, such as ancho and chipotle peppers. Chiles are used in salsas. Mexican households usually grow chile plants to use in cooking.

In India, most households always keep a stock of fresh hot green chilies at hand, and use them to flavor most curries and dry dishes. It is typically lightly fried with oil in the initial stages of preparation of the dish. Some states in India, such as Rajasthan, make entire dishes only by using spices and chilies.[citation needed]

Chili is a staple fruit in Bhutan. Bhutanese call this crop ema (in Dzongkha) or solo (in Sharchop). The ema datshi recipe is entirely made of chili mixed with local cheese.

Chilies are present in many cuisines. Some notable dishes other than the ones mentioned elsewhere in this article include:

Fresh or dried chilies are often used to make hot sauce, a liquid condiment—usually bottled when commercially available—that adds spice to other dishes. Hot sauces are found in many cuisines including harissa from North Africa, chili oil from China (known as rāyu in Japan), and sriracha from Thailand. Dried chilies are also used to infuse cooking oil.

The contrast in color and appearance makes chili plants interesting to some as a purely decorative garden plant.

Psychologist Paul Rozin suggests that eating chilies is an example of a "constrained risk" like riding a roller coaster, in which extreme sensations like pain and fear can be enjoyed because individuals know that these sensations are not actually harmful. This method lets people experience extreme feelings without any significant risk of bodily harm.[38]

Capsaicin, the chemical in chili peppers that makes them hot, is used as an analgesic in topical ointments, nasal sprays, and dermal patches to relieve pain.[39]

Capsaicin extracted from chilies is used in manufacturing pepper spray and tear gas as chemical irritants, forms of less-lethal weapons for control of unruly individuals or crowds.[40] Such products have considerable potential for misuse, and may cause injury or death.[40]

Conflicts between farmers and elephants have long been widespread in African and Asian countries, where elephants nightly destroy crops, raid grain houses, and sometimes kill people. Farmers have found the use of chilies effective in crop defense against elephants. Elephants do not like capsaicin, the chemical in capsicum chilies that makes them hot. Because the elephants have a large and sensitive olfactory and nasal system, the smell of the chili causes them discomfort and deters them from feeding on the crops. By planting a few rows of the pungent fruit around valuable crops, farmers create a buffer zone through which the elephants are reluctant to pass. Chili dung bombs are also used for this purpose. They are bricks made of mixing dung and chili, and are burned, creating a noxious smoke that keeps hungry elephants out of farmers' fields. This can lessen dangerous physical confrontation between people and elephants.[41]

Birds do not have the same sensitivity to capsaicin, because it targets a specific pain receptor in mammals. Chili peppers are eaten by birds living in the chili peppers' natural range, possibly contributing to seed dispersal and evolution of the protective capsaicin in chili peppers.[42]

While red chilies contain large amounts of vitamin C (table), other species contain significant amounts of provitamin A beta-carotene.[43] In addition, peppers are a rich source of vitamin B6 (see table).

The three primary spellings are chili, chile and chilli, all of which are recognized by dictionaries.

The name of the plant is almost certainly unrelated to that of Chile, the country, which has an uncertain etymology perhaps relating to local place names.[50] Chile, Colombia, Ecuador, Panama, Peru, Dominican Republic and Puerto Rico are some of the Spanish-speaking countries where chilies are known as ají, a word of Taíno origin. Though pepper originally referred to the genus Piper, not Capsicum, the latter usage is included in English dictionaries, including the Oxford English Dictionary (sense 2b of pepper) and Merriam-Webster.[51] The word pepper is also commonly used in the botanical and culinary fields in the names of different types of chili plants and their fruits.