Chicoutimi /ʃɪˈkuːtɪmi/ is the most populous borough (arrondissement) of the city of Saguenay in Quebec, Canada.

It is situated at the confluence of the Saguenay and Chicoutimi rivers. During the 20th century, it became the main administrative and commercial centre of the Saguenay–Lac-Saint-Jean region. In 2002 it merged into the new city of Saguenay and forms the heart of the 5th-largest urban area of the province of Quebec. At the 2011 census, its population was 66,547.[1]

Old Chicoutimi Pulp Mill, an early 20th-century industrial complex in operation from 1898 to 1930

What was ultimately to become the centre of the borough of Chicoutimi was first settled by French colonists in 1676 as a trading post in the fur trade. At that time, the Saguenay and the Chicoutimi rivers had been used as waterways by the Montagnais tribes for centuries. The name Chicoutimi means the end of the deep water in the Innu language. After the British seized Lower Canada, the Chicoutimi trading post continued to operate only until 1782, as the fur trade had moved further west of the Great Lakes.

Since the Great Depression, the city has become an administrative and commercial centre. New centers of education and culture were established: in 1967, the Conservatoire de musique de Saguenay; and in 1969, the Université du Québec à Chicoutimi. The city also played host to the Quebec Summer Games in 1972.

In the municipal amalgamations of 1976, Chicoutimi annexed the neighbouring towns of Chicoutimi-Nord and Rivière-du-Moulin. In a much larger round of Municipal reorganization in Quebec in 2002, the cities of Chicoutimi, Jonquière, La Baie, Lac-Kénogami, Laterrière, Shipshaw and part of Tremblay merged to form the new city of Saguenay.[2] Chicoutimi became a borough of Saguenay.

During the summer of 1996, a record rainfall in the region caused major flooding in the downtown, as well as outlying areas. Dams were overrun, many bridges were destroyed throughout the region. The total cost of the disaster was recorded as 1.5 billion Canadian dollars. The flood also claimed seven lives.

Chicoutimi is located in Saguenay–Lac-Saint-Jean region on the western end of the Saguenay Fjord; most of the borough, including the downtown section, is on the south shore of the Saguenay River. It is the geographical centre of the city of Saguenay; the Jonquière and La Baie boroughs adjoin on the west and east sides. Chicoutimi is about 200 kilometres (120 miles) north of Quebec City and 126 kilometres (78 miles) northwest upriver from Tadoussac, at the confluence of the St. Lawrence River. The former cities of Chicoutimi borough are: Chicoutimi, Laterrière, Canton-Tremblay, Chicoutimi-Nord and Rivière-du-Moulin. They have maintained their names as wards in the amalgamated city.

The landscape of Chicoutimi consists of hills, valleys and plains, with the terrain becoming steeper near the Saguenay River. Its two major physical features are the Saguenay Graben, a rift valley of the Laurentian Highlands in which the city spreads, and the Saguenay Fjord, the glacier-carved steep shores of the Saguenay River. Mount Valin at 3,215 feet (980 metres) is the tallest mountain of the region, and overlooks Chicoutimi 30 kilometres (19 miles) north-east. The Chicoutimi, Du Moulin and Valin rivers all empty in the Saguenay river in Chicoutimi.

Panoramic view of the Saguenay River from St Anne's Cross (north shore) with downtown Chicoutimi in the background. 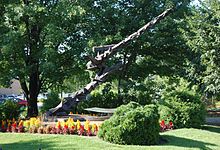 The city has been home to the QMJHL's Chicoutimi Saguenéens since 1973. They play at the Centre Georges-Vézina.

Residents of Chicoutimi are represented by three tiers of government. The first are the city councillors elected from single-member districts and the mayor elected at-large for the city of Saguenay. At the provincial tier, two elected members serve in the National Assembly of Quebec for the provincial ridings of Chicoutimi and Dubuc. The federal representation consists of a members of parliament serving in the Parliament of Canada for the federal riding of Chicoutimi—Le Fjord.

Chicoutimi is twinned with:

According to the website of the Phoenix Coyotes, an NHL hockey team in the United States, the team's mascot, Pierre the Fanatic Hockey Snowman, comes from Chicoutimi.[4]