Chicharrón, as a dish with sauce, or chicharrones as finger-food snacks, are popular in Andalusia in Spain, Latin America and other places with Spanish influence including the Southwestern United States. It is part of the traditional cuisines of Bolivia, Portugal (where it is called torresmo), Chile, Colombia, Costa Rica, Cuba, Haiti, the Dominican Republic, Ecuador, Guam, Guatemala, Honduras, El Salvador, Mexico, Nicaragua, Panama, Peru, the Philippines, Puerto Rico, Venezuela and others. The singular form of the term or a variant of it is also used as a mass noun in Filipino and Tagalog, in which stand-alone plurals do not exist. Chicharrones are usually made from various cuts of pork but sometimes with mutton, chicken or other meats. In some places they are made from pork ribs with skin attached and other meatier cuts rather than just rinds.

The pork rind variant is the skin of the pork after it has been seasoned and deep fried often to a crispy, puffy state. Other styles may be fatty or meaty, not fried as much, and sometimes attached to ribs or other bones. In Mexico, they are eaten in a taco or gordita with salsa verde. Serving styles vary widely, including main course, side dish, filling for tortillas and other bread, the meat portion of stews, and as finger-food snacks.

In Brazil, it is known as torresmo. The dish may be seasoned with garlic, pepper, and/or other spices. It is cooked in its own fat or oil; the finished product is typically complemented with a wedge of lime.

Chicharrón is made of pork ribs seasoned with garlic, oregano and lemon. It is boiled then cooked in its own fat, adding beer or chicha to the pot for more flavor. Pork chicharrón is normally served only on Sundays and is eaten with llajwa, a tomato salsa, and mote, a type of corn (maize). There are other variations of chicharrón made with chicken and fish.

Chicharrón is made from deep-fried pig skin with meat attached, but it can also be made from chicken skin. In the Caribbean coast, it is eaten along with bollo de yuca, bollo limpio or boiled yuca at breakfast at home or at any time of the day at restaurants. It is eaten chopped as a stuffing in arepas. In Córdoba, it is also prepared in sancocho. It is also part of bandeja paisa, a typical dish of Antioquia.

Chicharrones are made of fat, sometimes with a bit of meat, and are typically served with homemade bread.

Chicharrones are made by frying pork (usually ribs) in fat, and are associated with several dishes. Most Costa Ricans eat them with rangpur or lime juice and fried yuca, accompanied by tortillas. They are also a main ingredient in a popular dish called chifrijo, which also combines red beans, rice, and pico de gallo.

Chicharrón is usually eaten with tostones. It is prepared by washing and drying pork and cutting it into small pieces, which are seasoned with a mix of lemon juice and salt.

Pupusas are often filled with chopped chicharrón as a stuffing.

The dish is known in the local Chamorro language as chachalon, derived from the food's Spanish name.

Chicharrón is eaten with tortillas, lime, guacamole, and Moronga. Sometimes served with Pico de Gallo or Chirmol salsa. Also known as carnitas in Guatemala, these refer to a meatier part of the pork rind. Where a chicharrón is, strictly speaking, skin and fat, carnitas denotes skin with some meat as well. (In other places, carnitas generally refers to fried pork meat without skin or a stew-like dish made from it.)

Besides chicharrón made from pig skin and fat, snack-food companies Barcel and Sabritas have commercialized vegetarian versions (primarily made of puffed cornmeal batter) with chile and lemon flavorings since the 1980s. Chicharrón de cerdo are also distributed by many salty snack companies in Mexico, sold in supermarkets, and made and sold by markets, tianguis, and street vendors. Tacos de chicharrón (chicharrones wrapped in a tortilla with some avocado, creamy cheese (such as queso panela, queso blanco, or queso fresco), and sometimes, hot sauce) are popular as snacks, appetizers, or a main dish. Popular dishes that make use of chicharrón as a main ingredient include chicharrón con salsa verde and gorditas de chicharrón. 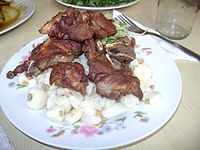 Chicharrón from the Ancash Region.

Chicharrón in Perú is made using what is called "country-style pork rib" in the United States. The rind (skin and attached fat) is not used at all; instead, the meat is boiled with seasonings and spices until no water remains and then fried in its own fat. It is often served as a breakfast or brunch food on a baguette with a relish made of red onion and lime juice. Chicharrón can be eaten as an appetizer or snack, and the chicken variant can taste like fried chicken found in the United States. Sides include a kind of red onion relish, fried yuca, and other regional variants. Chicharrón can also be prepared with fish rather than pork. 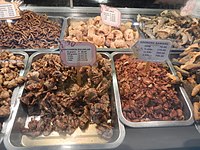 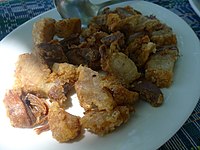 Chicharon, less commonly spelled tsitsaron, is ubiquitous, as it is a well-loved snack, and may be bought anywhere, from large supermarket chains to small neighborhood sari-sari stores and street vendors. It is popular as pulutan or tapas food to be eaten while consuming alcoholic beverages. It is also used as a topping on many native vegetable and noodle dishes. Pork chicharon is prepared by deep-frying dried pork rind with a little salt. It may be dipped in coconut vinegar spiced with soy sauce, chopped garlic and labuyo chili peppers, or eaten with other condiments like bagoong anchovies, lechon gravy sauce, or atchara papaya salad.

Aside from pork rind, chicken skin may also be made into chicharong manok, whereas chicharong bulaklak—literally 'flower chicharrón', named for its distinctive shape—is made from pig offal.[1]

Tuna-skin chicharon is marketed as a healthier variation. In Cagayan, water buffalo hide is used to make "carabao chicharon".[2]

A distinct variant of chicharon involves cooking pork loin and meat in the same way, becoming bagnet. While similar and dissimilar to crispy pata, it is more popular as a meal than finger food, and has found its way to contemporary dishes and restaurants. Bagnet originates from Ilocos where it has been served since the 1960s.[3]

Mofongo is a popular dish in which green plantains, cassava, or breadfruit are fried then mashed with chicharrón and other ingredients. Chuleta kan-kan is found in Puerto Rican fondas, using a pork chop (chuleta) with rib, fat, and skin still attached, then marinated. Chuleta kan-kan is deep-fried, forming chicharrónes of crispy skin attached to the rib and pork-chop meat. The city of Bayamón – nicknamed the "city of chicharrón" – is famous for the chicharrón produced locally, as is the Guavate barrio in the city of Cayey.[4] Chicharrón is a popular in Puerto Rican fried rice with added sofrito, pigeon peas, spices and other ingredients. Rusiao de yuca like pasteles are made from grated cassava that has been dehydrated, toasted, then notably rehydrate with coconut milk into masa and seasoned with anis, mashed or finely chopped chicharrón, oregano among other ingredients. They are then wrapped in banana leaf and grilled.

American-style pork rinds are usually made from pig skin and fat without meat. They are commonly seasoned and sold in plastic bags, like corn and potato chips (crisps) as a "junk food" item. Some brands in the Southwest use the Spanish term chicharrones, and Mexican-style chicharrón dishes are available in many Mexican and Southwestern restaurants in the region. In the Deep South, traditional home-cooked pork rinds are called cracklings or (colloquially) cracklins. They are made in a two-step process: the pork skin is first rendered and dried, and then fried and puffed.[5] In New Mexico, the term is often taken to mean just fried pork fat, sometimes with incidental bits of lean meat.

In central Venezuela, chicharrones are eaten with cachapas and also commonly sold alongside main highways as snacks. The recipe usually produces crispy sizable portions of pork skin with the underlying meat. The cueritos type are also made with pork skin and marinated in vinegar instead of deep fried. They are eaten as a snack.

Pork rind is also eaten in many other countries in forms unrelated to the chicharrón tradition. For example, in Denmark, flæskesvær is pork skin deep-fried with or without a layer of fat. It is usually eaten as a snack, like crisps (chips) or popcorn. At Christmas-time it is also traditional to eat fried strips of pork belly the skin on, with or without meat in addition to fat. In the countryside in Greece, during Christmas time people prepare "Tsigarídes" which is deep fried pork belly skin. In the United Kingdom Pork Rinds are called "Pork Scratchings". They are a popular snack sold in pubs and bars, packaged in small plastic bags like potato crisps.