In 1950 the US government sent military advisers to train tribal police along the border of Thailand. Among them was Harold Mason Young, son of American missionaries, who had been born in Burma. Young started helping injured animals, and his collection started getting visitors. The Chiang Mai provincial government set aside 24 acres (9.7 ha) at the base of Doi Suthep, the mountain immediately adjacent to Chiang Mai, and the facility was opened to the public in 1957.[1][3]

When Young died in 1974, the property was taken over by Chiang Mai Province. The zoo was expanded to its current 200 acres (81 ha) footprint, transferred to the Zoological Park Organization under the patronage of the King of Thailand, and opened as the official zoo of Chang Mai Province in 1977.[1][2]

Chiang Mai Zoo is privately operated and includes a large variety of animals. In addition, it provides two large aquariums. On 28 October 2008, an aquatic tunnel with a length of 133 metres (436 ft)—the world's longest tunnel aquarium— was opened to the public. It also has a marine aquarium, which is the largest in Asia. 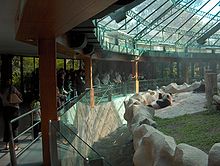 Giant pandas Lin Hui and Chuang Chuang arrived at the zoo on 12 October 2003, and are on 10-year loan from China. Their daughter Lin Bing was born at the zoo on 27 May 2009, and will be returned to China when she is two years old. Lin Bing is one of just a few giant pandas born in captivity outside China.[6][7]

The aquarium has many sea creatures, including invertebrates and Asian arowana. It also has carnivorous fish such as sharks.