The university was the first institution of higher education in northern Thailand, and the first provincial university in Thailand. 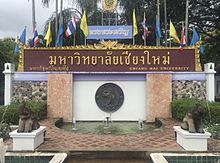 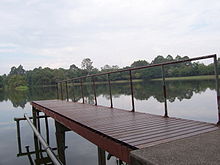 Chiang Mai University has four campuses, three of them in Chiang Mai and one in Lamphun, which together cover about 3,490 acres (14.1 km2).[4] There are 18 housing complexes located on campus for students attending the university. Seventeen of them are on the main campus and one is on the Mae Hea campus[5]

The main university campus, known as Suan Sak campus (Thai: สวนสัก) or Cherng Doi (Thai: เชิงดอย), lies about five kilometres west of the city center. Set against Doi Suthep, the campus occupies a 725-acre (2.93 km2) site, bounded on three sides by main shopping streets and on the fourth by the Chiang Mai Zoo. The campus includes the university's administrative centre, the science, engineering, humanities, and social science faculties, political science and public administration, law, the graduate school, all of the campus resource facilities and services and major sports facilities. An attractive feature of this campus is the Ang Kaew Reservoir. Constructed to supply water for the university, it is also a recreational area for campus residents and the local community. In the 1960s, the area was still forested. With conservation in mind, university buildings were constructed between the trees, with the result that the campus still retains much of its original setting.

About 5 km south of the main campus, the 864-acre (3.50 km2) Mae Hea campus (Thai: แม่เหียะ) is home to the faculties of veterinary medicine agro-industry and School of Public Policy. The Energy Research and Development Institute (ERDI), the university center for renewable energy (mainly biogas and biomass), and energy efficiency improvement center, moved from the main campus to the Mae Hea campus in January 2009. This center is a national "biogas center of excellence", emphasizing biogas activities, especially biogas on swine farms.[citation needed]

Chiang Mai University is a large, highly residential, research university, with a majority of enrollment coming from graduate and professional students. 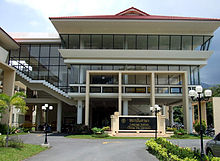 There are 20 faculties and one college in three disciplines.[6]

Chiang Mai University ranks third in academics and fifth in research according to the Thailand Office of the Higher Education Commission[8] Quacquarelli Symonds ranked the university 96th in Asia in 2019.[9]