Chernivtsi Oblast (Ukrainian: Чернівецька область, Chernivetsʹka oblastʹ) is an oblast (province) in western Ukraine, consisting of the northern parts of the regions of Bukovina and Bessarabia. It has an international border with Romania and Moldova. The oblast is also the smallest in Ukraine.

The oblast has a large variety of landforms: the Carpathian Mountains and picturesque hills at the foot of the mountains gradually change to a broad partly forested plain situated between the Dniester and Prut rivers. Its capital is the city Chernivtsi. The region spans 8,100 km². Population: 909,893 (2015 est.)[3]

Chernivtsi Oblast covers an area of 8,097 km2 (3,126 sq mi). It is the smallest oblast in Ukraine, representing 1.3% of Ukrainian territory.

Chernivtsi Oblast is bordered by Ivano-Frankivsk Oblast, Ternopil Oblast, Khmelnytskyi Oblast, Vinnytsia Oblast, Romania, and Moldova. Within the oblast the national border of Ukraine with Romania extends 226 km, and with Moldova 198 km (123 mi).[4]

Chernivtsi oblast was created on August 7, 1940 in the wake of the Soviet occupation of Bessarabia and Northern Bukovina. The oblast was organized out of the northeast part of Ţinutul Suceava of Kingdom of Romania, joining parts of three historical regions: northern half of Bukovina, northern half of the Hotin County county of Bessarabia, and Hertza region, which was part of the Dorohoi county (presently Botoşani County) of proper Moldavia.

Archaeological sites in the region date back to 43,000-45,000 BC, with finds including a mammoth bone dwelling from the Middle Paleolithic.[5] The Cucuteni-Trypillian culture flourished in the area. In the Middle Ages, the region was inhabited by East Slavic tribes White Croats and Tivertsi.[6] From the end of the 10th century, it became a part of the Kievan Rus', then Principality of Halych, and in the mid-14th century of the Principality of Moldavia (which in the 16th century became a vassal of the Ottoman Empire).[6] In 1775, two counties of Moldavia, since then known as Bukovina, were annexed by the Habsburg Monarchy's Holy Roman Empire, which later became the Austrian Empire. In 1812, one half of Moldavia, since then known as Bessarabia, was annexed by the Russian Empire. Hertza region remained in Moldavia until its union with Wallachia in 1859, a union which in 1881 became the Kingdom of Romania. In 1918 both provinces of Bukovina and Bessarabia united with the Kingdom of Romania.

The Soviet occupation began on June 28, 1940. In addition to Bessarabia, the USSR demanded Northern Bukovina as compensation for the occupation of Bessarabia by Romania from 1918 to 1940. Hertza region was not included in the demands that the Soviet Union addressed to Romania, but was occupied at the same time. Most of the occupied territories were organized on August 2, 1940 as the Moldavian Soviet Socialist Republic, while the remainder, including the Chenivtsi Oblast, which was formed on August 7, 1940, were included in the Ukrainian Soviet Socialist Republic.

Throughout 1940-1941 several tens of thousands of Bukovinians were deported to Siberia and Kazakhstan, some 13,000 of them on June 13, 1941 alone. This and later deportations were primarily based on social class difference, it targeted intellectuals, people employed previously by the state, businessmen, clergymen, students, railworkers. The majority of those targeted were ethnic Romanians, but there were many representatives of other ethnicities, as well. The protests of the Romanian population of Bukovina that found themselves under the Soviet rule brought about serious Soviet reprisals, including of ethnic character. In the winter and spring of 1941, the Soviet troops (NKVD) opened fire on many groups of locals trying to cross the border into Romania (for more, see: Fântâna Albă massacre).

Between September 17 and November 17, 1940, by a mutual agreement between USSR and Germany, 43,641 "ethnic Germans" from the Chernivtsi region were moved to Germany, although the total ethnic German population was only 34,500, and of these some 3,500 did not go to Germany. Upon their arrival in Germany, the Nazi government sent most of non-ethnic Germans to concentration camps.[citation needed] Only some of them were freed after the protests of the Romanian government.

During World War II, when the region returned under the control of the Romanian administration, the Jewish community of the area was largely destroyed by the deportations to ghettos and Nazi concentration camps, where about 60% died. Despite the anti-Semitic policies of the Ion Antonescu's government of Romania, the mayor of Cernăuți, Traian Popovici, now honored by Israel's Yad Vashem memorial as one of the Righteous Among the Nations, saved approximately 20,000 Jews.[citation needed]

In 1944, when the Soviet troops returned to Bukovina, many inhabitants fled to Romania, and Soviet persecutions resumed, with the result that the region was seriously depopulated. In demographic terms, these war-time and post-war-time factors changed the region's ethnic composition. Today the number of Jews, Germans and Poles is negligible, while the number of Romanians has decreased substantially.

Ruthenian communities in Bukovina date back to at least 16th century. In 1775, Ukrainians (Ruthenians) represented some 8,000 out of a 75,000 population of Bukovina. By 1918, as a result of immigration of Ukrainian peasants from nearby villages in Galicia and Podolia, there were over 200,000 Ukrainians, out of a total of 730,000. Most of Ukrainians settled in the northern parts of Bukovina. Their number was especially large in the area between the Dniester and Prut rivers, where they became a majority. A similar process occurred in Northern Bessarabia. Throughout the history of the region, there were no inter-ethnic clashes, while the city of Chernivtsi was known for its German-style architecture, for a highly cultivated society, and for ethnic tolerance. Small ethnic disputes were, however, present on occasion. In 1918, many Ukrainians in Bukovina wanted to join an independent Ukrainian state. After an initial period of free education in Ukrainian language, in late 1920s Romanian authorities attempted to switch all education to the Romanian language. In 1940-1941, the Soviet reprisals were more massive in the parts of the Chernivsti oblast were Romanians predominated; when, however, after 1944, Ukrainian anti-Soviet resistance rose up, Romanians and Ukrainians fought alongside against NKVD.

Many Ukrainians in the south-western mountain area of the Chernivtsi region belong to the Hutsul ethnic sub-group, a sophisticated cultural community inhabiting an area in the Carpathian Mountains in both Ukraine and Romania.

The Chernivtsi Oblast consists of 11 raions (districts), as well as two cities directly subordinated to the oblast:

At the locality level, the territory of the oblast is divided among 11 cities, 8 towns, and 252 communes.

Ethnic divisions in Chernivtsi Oblast at the end of the Soviet Period [1], with Ukrainians, Romanians, Russians and Jewish areas depicted in white, blue, red, and yellow respectively. Note that the Moldovans, which represented 9% of the region's population according to the last Soviet census (1989),[7] are shown as Romanians. 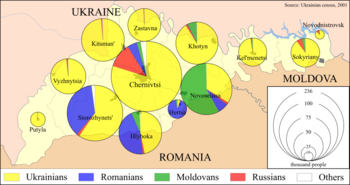 Ethnic division of the Chernivtsi Oblast according to the latest 2001 Ukrainian census results. Areas inhabited by Ukrainians, Romanians, Moldovans, Russians, and other ethnicities are depicted in yellow, blue, green, red, and white respectively. Circle sizes represent total population size in each area. Some consider Romanians and Moldovans to form a single ethnic group.

The separate categories for the Moldovans and Romanians as two ethnicities has been criticized by Romanian organizations in Ukraine.[9] However, all census respondents had to write in their ethnicity (no predetermined set of choices existed), and could respond or not to any particular census question, or not answer any questions at all.[10] Also, no allegation of counting fraud were brought up. However, Interregional Union, one of Romanian communities in Ukraine criticized what they see as the continuous usage of Romanians and Moldovans as two separate ethnic groups.

During the inter-war period, Cernăuți County had a population of 306,975, of which 136,380 were Ukrainians, and 78,589 were Romanians. Storojineţ County had 77,382 Ukrainians and 57,595 Romanians. (The three other counties of Bukovina, which remained in Romania, had a total of 22,368 Ukrainians). The northern part of the Hotin County had approximately 70% Ukrainians and 25% Romanians. Herţa region, smaller by area and population, was virtually 100% Romanian.

Major demographic changes occurred during the Second World War. Immediate after the Soviet takeover of the region in 1940 the Soviet government deported or killed about 41,000 Romanians (see Fântâna Albă massacre), while at the same time further encouraging an influx of Ukrainians from the Ukrainian SSR. Most Poles were deported by the Soviet authorities, while most Germans forcibly returned to Germany. After the Kingdom of Romania took control of the region during the war (1941–1944), the Jewish community of the area was largely destroyed by the deportations to ghettos and concentration camps.

The languages of the population closely reflect the ethnic composition with over 90% within each of the major ethnic groups declaring their national language as the mother tongue.