The details of a decomposition process are not always well defined but some of the process is understood; much energy is needed to break bonds. Since all decomposition reactions break apart the bonds holding it together in order to produce into its simpler basic parts, the reactions would require some form of this energy in varying degrees. Because of this fundamental rule, it is known that most of these reactions are endothermic although exceptions do exist.

For example this method is employed for several analytical techniques, notably mass spectrometry, traditional gravimetric analysis, and thermogravimetric analysis. Additionally decomposition reactions are used today for a number of other reasons in the production of a wide variety of products. One of these is the explosive breakdown reaction of sodium azide [(NaN3)2] into nitrogen gas (N2) and sodium (Na). It is this process which powers the life-saving airbags present in virtually all of today's automobiles.[2]

In the breakdown of a compound into its constituent parts, the generalized reaction for chemical decomposition is:

An example is the electrolysis of water to the gases hydrogen and oxygen: 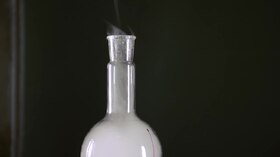 An example of a spontaneous (without addition of an external energy source) decomposition is that of hydrogen peroxide which slowly decomposes into water and oxygen (see video at right):

This reaction is one of the exceptions to the endothermic nature of decomposition reactions.

Other reactions involving decomposition do require the input of external energy. This energy can be in the form of heat, radiation, electricity, or light. The latter being the reason some chemical compounds, such as many prescription medicines, are kept and stored in dark bottles which reduce or eliminate the possibility of light reaching them and initiating decomposition.

When heated, carbonates will decompose. A notable exception is carbonic acid, (H2CO3).[4] Commonly seen as the "fizz" in carbonated beverages, carbonic acid will spontaneously decompose over time into carbon dioxide and water. The reaction is written as:

Other carbonates will decompose when heated to produce their corresponding metal oxide and carbon dioxide.[5] The following equation is an example, where M represents the given metal:

A specific example is that involving calcium carbonate:

Metal chlorates also decompose when heated. In this type of decomposition reaction, a metal chloride and oxygen gas are the products. Here, again, M represents the metal:

A common decomposition of a chlorate is in the reaction of potassium chlorate where oxygen is the product. This can be written as: