Charlevoix (/ˈʃɑːrləvwɑː/)[1] is a cultural and natural region in Quebec, on the north shore of the Saint Lawrence River as well as in the Laurentian Mountains area of the Canadian Shield. This dramatic landscape includes rolling terrain, fjords, headlands, and bays; the region was designated a World Biosphere Reserve by UNESCO in 1989. Administratively, it comprises the Charlevoix and Charlevoix-Est regional county municipalities.

The region was named after Pierre François-Xavier de Charlevoix, a French Jesuit explorer and historian who travelled through the area in the 18th century. The community of La Malbaie was known as the first resort area in Canada. As early as 1760, Scottish noblemen Malcolm Fraser and John Nairn hosted visitors at their manors.[citation needed] For much of its history, Charlevoix was home to a thriving summer colony of wealthy Americans, including President William Howard Taft. 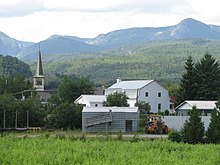 Charlevoix is known for its hilly landscape.

January view on the St-Lawrence river in St-Siméon

From an administrative point of view, the "Charlevoix region" does not exist in itself, but is rather made up of the regional county municipalities of Charlevoix-Est and Charlevoix.

Features of note include:

The topography of this region was dramatically altered by a meteorite impact that occurred 350 million years ago creating the Charlevoix crater:

The impact created the forty-mile-wide crater that is the heart of Quebec's Charlevoix region, ranging from just west of Baie-Saint-Paul to just east of La Malbaie. Today, the area inside the crater is home to 90 percent of Charlevoix residents and is a very pastoral setting by comparison to what it could have been.[2]

This area was subsequently reshaped by glaciation. There have been several major earthquakes in the region in recorded history:

About 30,000 people live in the biosphere reserve (1988), which covers 457,000 hectares. In former times, the population of Charlevoix used to rely on the river and the sea, for example on coastal navigation, marine constructions and fisheries (e.g. beluga, eel).[3]

Today, the economic landscape has diversified and major factors in the local economy are now forestry, silica mining, agriculture and tourism.[3] The forest education centre ‘Les Palissades’ or the ecological centre ‘Port-au-Saumon’ are important institutions for environmental education in the area.[3]

This article incorporates text from a free content work. Licensed under CC-BY-SA IGO 3.0 License statement/permission on Wikimedia Commons. Text taken from Charlevoix Biosphere Reserve, UNESCO. To learn how to add open license text to Wikipedia articles, please see this how-to page. For information on reusing text from Wikipedia, please see the terms of use.