Richmond was a keen cricketer. He was an accomplished right-hand bat and a noted wicket-keeper. An amateur, he was a founder member of the Marylebone Cricket Club. In 1786, together with the Earl of Winchilsea, Richmond offered Thomas Lord a guarantee against any losses Lord might suffer on starting a new cricket ground. This led to Lord opening his first cricket ground in 1787. Although Lord's Cricket Ground has since moved twice, Richmond and Winchilsea's guarantee provided the genesis of the best-known cricket ground in the world, a ground known as the Home of Cricket. Nearly always listed as the Hon. Colonel Charles Lennox in contemporary scorecards, Richmond had 55 recorded first-class appearances from 1784 to 1800 and played a few more games after that.

Richmond became a British Army captain at the age of 23 in 1787. On 27 May 1789, while a colonel in the Duke of York's regiment, he was involved in a duel with Frederick, Duke of York, who had expressed the opinion that "Colonel Lennox had heard words spoken to him at Daughbigny's, to which no gentleman ought to have submitted", effectively an accusation of failing to respond to an insult in the way that a gentleman should. At Wimbledon Common, Richmond fired, but his ball "grazed his Royal Highness's curl"; the Duke did not fire.[1] Richmond shortly after exchanged his company for the commission of a lieutenant-colonel in the 35th Regiment of Foot.[2] On 1 July of the same year, he was involved in another duel, with Theophilus Swift, Esq., in consequence of a pamphlet criticising Richmond's character published under Swift's name. They met in a field near the Uxbridge Road, where Swift was wounded in the body, but recovered.[3]

Later in the year he married Lady Charlotte Gordon. In 1794 and 1795 he participated in naval engagements against the French in the West Indies and Gibraltar, but was sent home when he came into conflict with his superiors. He was also MP for Sussex, succeeding his father, from 1790 until he succeeded to the dukedom.

He became the 4th Duke of Richmond on 29 December 1806, after the death of his uncle, Charles Lennox, 3rd Duke of Richmond. In April 1807 he became Lord Lieutenant of Ireland. He remained in that post until 1813. He participated in the Napoleonic Wars and in 1815 he was in command of a reserve force in Brussels, which was protecting that city in case Napoleon won the Battle of Waterloo. On 15 June, the night before the Battle of Quatre Bras, his wife held a ball for his fellow officers. The glittering celebration became famous as the Duchess of Richmond's ball and was immortalised by William Makepeace Thackeray in Vanity Fair and by Lord Byron in Childe Harold's Pilgrimage.

Although the Duke observed the Battle of Quatre Bras the next day, as well as Waterloo on 18 June, he did not participate in either.

In 1818 he was appointed Governor General of British North America.

During summer 1819, Richmond was undertaking a tour of Upper and Lower Canada, when he was bitten on the hand by a fox. The injury apparently healed and he continued on the tour, but later in his journey the initial symptoms of hydrophobia appeared. After the disease had developed rapidly, he died 28 August. Richmond's body was returned to Quebec, where he was buried at the Cathedral of the Holy Trinity on 4 September.[4]

The night before his death, he slept at the "Masonic Arms", which was renamed the "Duke of Richmond Arms" to commemorate the visit.

Richmond's title was inherited by his son, Charles Gordon-Lennox, 5th Duke of Richmond. 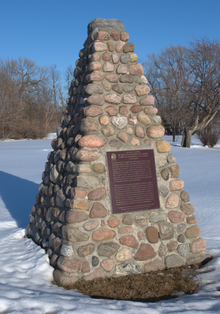 Cairn marking the approximate location of the Duke's death. 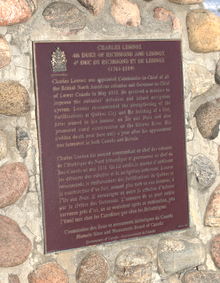 Plaque on the 4th Duke of Richmond's cairn.

Richmond Park (football ground) in Inchicore, Dublin, still bears his name. Now the home ground of St. Patrick's Athletic Football Club, it was once a part of Richmond Barracks as Richmond was Lord Lieutenant of Ireland (1807–1813). It was to these barracks that over 3,000 prisoners were brought after the 1916 Easter Rising in Dublin. After independence the barracks were renamed Keogh Barracks and later were redeveloped as housing for the capital's poor and again renamed Keogh Square. 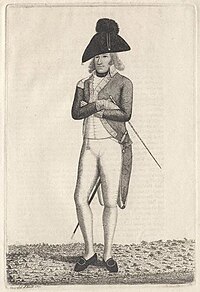