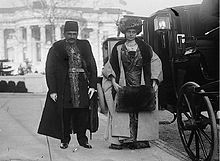 Persia's chargé d'affaires and his wife visiting President Woodrow Wilson at the White House in May 1913.

A chargé d'affaires (French pronunciation: ​[ʃaʁʒe dafɛʁ]), often shortened to chargé (French) and sometimes to charge-D (abbreviated in colloquial English), is a diplomat who served as an embassy's Chief of mission in the absence of the ambassador. The term is French for "charged with (in charge of) matters". A female diplomat may be designated a chargée d'affaires, following French declension.

An invitation from the Japanese chargé d'affaires in Iceland.

In certain cases, a chargé d'affaires may be appointed for long periods, such as when a mission is headed by a non-resident ambassador who is accredited to multiple countries. In addition, a mission may be downgraded from an ambassadorial to a chargé d'affaires level to show displeasure, yet avoid taking the extremely serious step of breaking diplomatic relations. For example, Saudi Arabia and Thailand have not exchanged ambassadors since 1989, due to the still-unresolved Blue Diamond Affair.[6]

Sometimes when diplomatic recognition is extended to a new government, a chargé may be sent to immediately establish diplomatic representation. However, if a timely exchange of ambassadors does not take place, this may result in a prolonged period of chargé-level relations. For example, the United Kingdom recognized the People's Republic of China in 1950 and posted a chargé d'affaires in the new capital of Beijing. However, China was unwilling to exchange ambassadors until the United Kingdom withdrew its consulate from Taipei. Sino-British relations were not upgraded to the ambassadorial level until 1972.[7]

Since a chargé d'affaires presents his or her credentials to the foreign minister rather than the head of state, the appointment of a chargé may avoid a politically sensitive meeting that would imply approval or recognition of that head of state or government. Similarly, the receiving country may decline to receive an ambassador, but still maintain diplomatic relations by accepting a chargé. For example, the Republic of Cyprus appoints a number of chargés d'affaires en pied to its embassies abroad.[8]

In modern use, chargés d'affaires essentially differ from ambassadors in that, like all diplomats, chargés represent their nation, but unlike an Ambassador, they are not personal representatives of their Head of State. Apart from rank and precedence, Chargés enjoy the same privileges and immunities as other diplomatic agents.

However, there have been rare historical circumstances in which the title chargé d'affaires was in fact employed in a more significant colonial role, as commonly held by a resident. Thus, in Annam-Tonkin (most of present Vietnam), the first French chargé d'affaires at Huế, the local ruler's capital, since 1875; one of them (three terms) was appointed the first resident-general on 11 June 1884, as they stopped being tributary to the Chinese Empire, less than a year after the 25 August 1883 French protectorates over Annam and Tonkin (central and northern regions).

In French usage, chargé d'affaires may be used outside diplomacy either as a specific position, or in general terms to indicate an individual with some more or less temporary responsibility for a specific area of activity.

Chargé d'affaires generally follows French usage: chargé d'affaires is singular, chargés d'affaires for plural. The "d'affaires" is always in the plural form, and should be lowercase even if Chargé is capitalized. Following the French declension, chargée d'affaires (with the feminine ending) may be seen where the chargé is female.

For temporary chargés, ad interim may or may not be added depending on the context, but is always lower case; it may be italicized or shortened to simply a.i.